Bedford too Much for Clearfield, as D5 Bisons Deny Janocko of Win No. 300 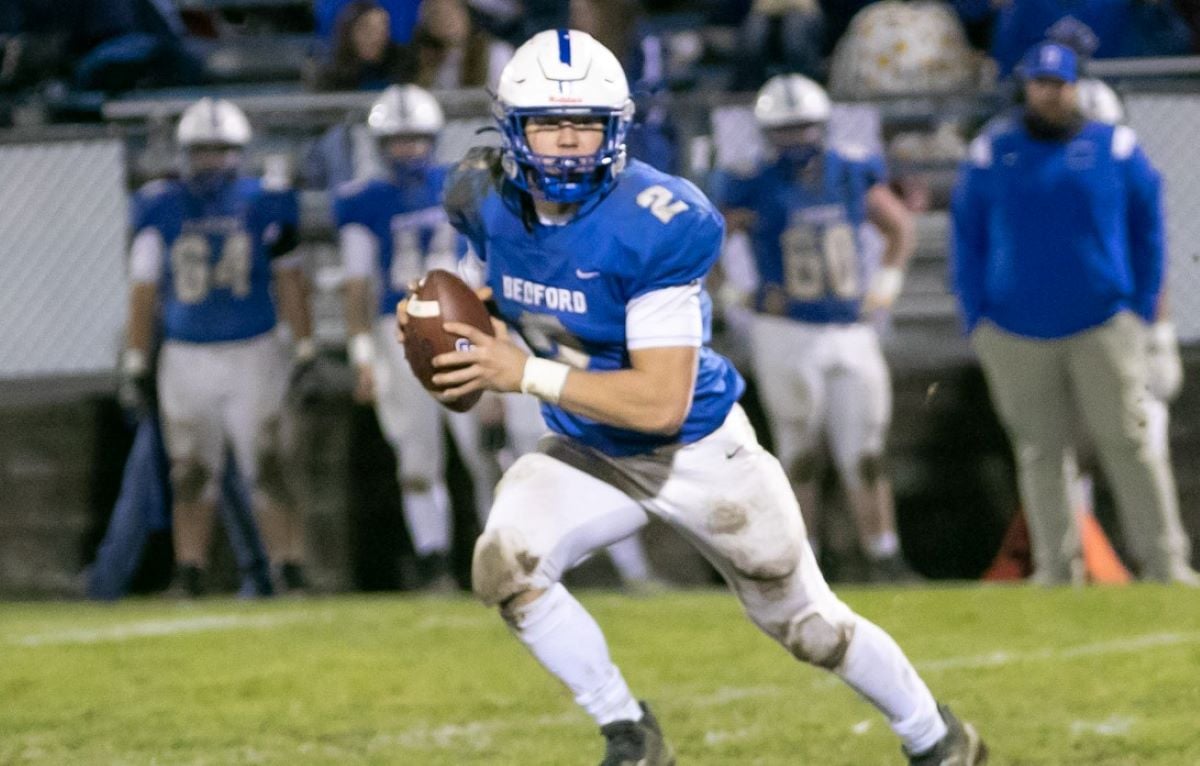 BEDFORD, Pa. – In the battle of the Bison, it was the Bedford Bisons that came out on top.

Mercury Swaim led Bedford going 13-of-19 for 209 yards and a touchdown while rushing 11 times for 70 yards and two scores to help the Bisons defeat Clearfield, 54-12 in the District 5-9 Class 3A Subregional game at Bedford High School Friday night.

“Things didn’t go our way tonight,” Clearfield head coach Tim Janocko, who was aiming for career win No. 300, said. “In all facets, we didn’t get a break anywhere. The score wasn’t indicative of the game. Things got out of control in the fourth quarter, but we had a great year.”

Bedford (10-1) got on the board quickly with Maxwell Washington punching in a 6-yard touchdown run to cap off a five-play, 57-yard drive to put the Bisons up 7-0 three minutes into the game.

The Clearfield Bison (11-1) responded immediately with Karson Kline taking the ensuing kickoff 87 yards and the deficit was cut to 7-6 following a missed PAT.

The Bisons next drive went 14 plays and 175 yards ending with Swaim scoring his first touchdown of the night with a 1-yard touchdown run extending the lead to 14-6.

Following a Bison three-and-out, The Bisons went up 21-6 following an Ethan Weber 9-yard touchdown run with over a minute left in the first quarter.

But quarterback Oliver Billotte came up short on fourth down at the Bedford 40 to turn the ball over on downs.

The Bisons made quick work with the turnover on downs as Washington broke off a 57-yard touchdown run two plays later to make it 27-6 with 5:23 left in the first half.

A 10-play, 76-yard drive was put together by Clearfield with Carter Chamberlain scoring the only offensive touchdown for the Bison with a 4-yard run and the Bison trailed 27-12 with 1:10 left in the first half.

Clearfield had a golden opportunity to cash in before the half as Jose Alban recovered a fumble by Swaim at the Bedford 42-yard line.

However, time ran out on the Bison, and Bedford held a 27-12 lead heading into halftime.

On the opening drive of the second half, Clearfield went 39 yards in 10 plays down to the Bedford 32, but Billotte’s pass to Kline on fourth down came up inches short and the Bisons took over on downs.

From there, the Bisons put together a 19-play, 77-yard drive that carried into the fourth quarter and was capped off with Swaim scoring a 13-yard touchdown run extending the Bedford lead to 33-12.

Washington was also a big factor on defense as he picked off sophomore quarterback Will Domico (who filled in for a shaken-up Billotte) on a fourth-down pass and took it 65 yards for a pick-six.

Billotte returned to the game on the Bison next drive but a three-and-out forced a punt.

It took only one play and Swaim found Washington on a slant route and he took it 78 yards and the Bisons led 47-12 with 7:17 left.

Washington finished the game with two catches for 95 yards and a touchdown while rushing five times for 71 yards and two scores.

Bedford scored its last touchdown of the night as Weber picked off Billotte for a 26-yard touchdown return.

Mark McGonigal was the leading rusher for the Bison gaining 43 yards in 12 carries. Kline led the receivers with seven catches for 72 yards with Justin Crutchfield grabbing two for 26 yards.

“Our kids competed well all year,” Janocko said. “We had a great year. Won a league championship, won a district championship and went undefeated.”

Bedford will face District 6 champion Central-Martinsburg in the opening round of the PIAA playoffs next week. The Bisons lost to the unbeaten Dragons, 41-27, Oct. 8 in Martinsburg.

District 9 and District 10 Football Live Scoreboard – Week 12 2021 (Nov. 12-13)
Cathedral Prep Rolls Past Hollidaysburg in Class 5A Subregional
We use cookies on our website to give you the most relevant experience by remembering your preferences and repeat visits. By clicking “Accept All”, you consent to the use of ALL the cookies. However, you may visit "Cookie Settings" to provide a controlled consent.
Cookie SettingsAccept All
Manage consent