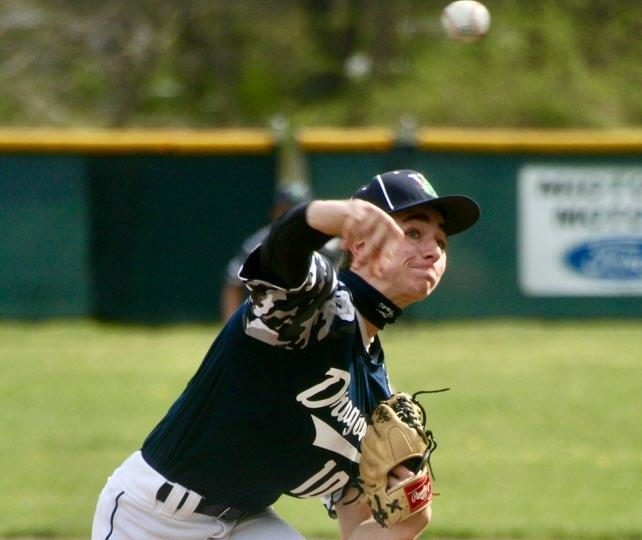 Berdine got the Dragons’ going in the first inning, connecting on a two-run blast to left. His 2-run double in the fourth inning made it 6-0.

Dylan Maeder pitched into the sixth inning for the Dragons to get the win. In his 5 ⅔ innings of work, he allowed four runs (two earned) on eight hits while striking out four. He also had two hits at the plate.

Micah Passmore reached base four times for the Dragons, going 2-for-2 with two runs scored, a walk and two RBIs, including a run-scoring double in the second inning. Ben Sowa added an RBI single.

Kane actually out-hit Warren, 10-9, and got on the board courtesy of Carson Whiteman’s RBI triple in the fifth inning. He picked up an outfield assist in the bottom half of the frame, throwing a laser to the plate from center to deny Alex Borger from scoring.

Andy Jekielek started and took the loss for Kane, allowing three runs in his two innings of work with two hits allowed, three walks and one strikeout. Luke Ely allowed three runs in two innings for the Wolves and Harley Morris two runs in 1 ⅔ innings.

Curt Barner had an RBI double for the Wolves in the seventh inning, while Justin Peterson and Morris both had two hits apiece.

Archie Teconchuk went the final 1 ⅓ innings for the Dragons, allowing one run on two hits.

Cunningham allowed just one walk and struck out nine.

The Blue Devils jumped out to a 2-0 lead in the first inning and broke it open with three runs in the sixth and four in the seventh.

Brady Jardina, Jaden Grubbs, and Brock Cunningham drove in two runs each for the Blue Devils, while Bryce Kania went 2-for-3 with two runs.

Owen Trumbull started and went five innings for Eisenhower, allowing four ones (one earned) on seven hits, striking out four.

Tegan Gray went the final two innings for the Knights.

Zane Alexander reached base twice for the Knights with a single and a walk.

Colon finished 3-for-3 and also scored two runs for the Lakers, who scored in every inning.

Hayden Zaffino tossed four innings, allowing just one hit and one walk, striking out nine. Nathan Lazan finished things up, striking out the side in the fifth.

Caleb Bish went 3-for-4 with an RBI, while Connor Fitzgerald and Zack Danias had two hits each for the Lakers.

ERIE, Pa. – Corry took a 3-0 lead in the first inning, but Cathedral Prep rallied with six runs in the third on their way to an 8-5 win.

Max Rimdzius and John Albers both had RBI singles in the first for Corry.

Nick Brundage went three innings, allowing three runs (one earned) on one hit and three walks, striking out one.

Anthony Grim also drove in a pair of runs for the Sailors.

The Eagles trailed 7-3 going into the sixth. Matt DeSimone doubled and drove in a pair of runs. Jason Beers went 1-for-3 with an RBI for the Eagles as well.

Collin May went 3-for-4 with a solo home run for Iroquois. May also hit a pair of doubles.

GUYS MILLS, Pa. – Brandon Snell went 2-for-4 with three RBIs to help Maplewood to a 9-3 win over Union City.

The Tigers scored eight runs in the first inning en route to the win.

Hochstetler was strong on the mound as well. He went 6 ⅔ innings, allowing three runs on four hits, striking out nine.

Steve Reed, Shane Uber, and Miles McCaslin all drove in runs in a 3-run third inning for Union City.

FRANKLIN, Pa. – Anthony Hernandez notched a go-ahead RBI single in the seventh inning to help Saegertown to a 9-7 win over Rocky Grove.

The Panthers trailed 6-2 before a 5-run sixth inning to take the lead. Dustin Nearhoff had an RBI in the inning for Saegertown, which took advantage of several Rocky Grove miscues.

Chandler Davison got the win, allowing one run in 3 ⅔ innings, allowing two hits, and striking out three.

Aaron Burkhart went 2-for-4 with a double and an RBI for the Orioles.

GIRARD, Pa. – Aiden Rubilotta went 2-for-4 with a triple and two RBIs to help Fairview to an 8-3 win over Girard.

The Tigers led 7-0 after a 4-run fifth inning. Sam DiStefano, Rubliotta, Aari Fox, and Sean Houston all drove in runs in the inning.

Collin Bolla also had a 2-run single in the second inning.

Houston was strong in getting the win. In 6 ⅔ innings, he struck out 10, giving up three runs (two earned) and surrendering six hits.

Ethan Getz was 2-for-3 for Girard, while Todd Essman suffered the loss.

EDINBORO, Pa. – Four first-inning runs held up for General McLane in a 4-2 win over Fort LeBoeuf.

Brandon Simmons got things going for the Lancers with a 2-run single. Isaac Kennedy also drove in a run in the inning.

On the mound, Eric Matthews got the win, striking out 10 in 5 ⅔ innings of work. He gave up two runs on four hits and three walks. Alex Leehan got the save, tossing 1 ⅓ shutout innings with one strikeout.

Ryan Welka went 2-for-4 with two RBIs for the Bison.

TITUSVILLE, Pa. – Zach Boland homered and drove in two runs and Noah Kockler drove in four to help Franklin to a 14-2, 5-inning win over Titusville.

The Knights scored four runs in each of the first two innings, which was more than enough for starter Luke Guth.

COCHRANTON, Pa. – Lexie Moore and Chelsea Freyermuth hit two home runs each to lead Cochranton to a 9-4 win over Girard.

Moore’s home runs came in the first and third inning, while Freyermuth’s blasts came in the third and fifth. Moore finished with four RBIs and Freyermuth three.

Chloa Lippert also had two RBIs for the Cardinals.

Taytum Jackson got the win, striking out nine and allowing four runs on 11 hits in the complete-game effort.

UNION CITY, Pa. – Union City scored in every inning but one en route to an 11-1, 6-inning win over Lakeview.

Sydney Gilbert and Emylee Zilenski each had three hits, with Gilbert driving in four runs and Zielenski three.

The Bears scored three runs in the first and four in the third.

Eliza Reynolds was 3-for-4 with three runs scored for the Bears, while Rienna Higley was 2-for-3 with an RBI.

Abby Tingley got the win, allowing five hits and striking out three.

HARBORCREEK, Pa. – Aubrey Hammill went 5-for-5 with a home run, three RBIs and five runs as Seneca won a 16-8 slugfest over Harbor Creek.

Helen Genest also had a monster day at the plate for the Bobcats, going 3-for-4 with a triple, home run, four RBIs, and three runs.

The Bobcats scored four runs in both the fourth and fifth innings and three more in the sixth.

Ashley Post got the win, allowing five earned runs on 12 hits while striking out a pair.

Maura Benim had a big day for Harbor Creek, going 4-for-5 with a pair of RBIs.

JAMESTOWN, Pa. – Jamestown scored 11 runs in the fourth inning to earn a 19-3 win over Slippery Rock.

Liz Kammerdiener went 2-for-2 with a double, triple, three RBIs and three runs scored as well for the winners.

Savannah Thruber got the win, allowing three runs on five hits, striking out one.

ERIE, Pa. – Alivia Soule was dominant on the mound, striking out 16 in a 1-hit shutout in McDowell’s 7-0 win over General McLane.

Megan Hoover drove in a pair of runs to lead the McDowell offense.

D9/10 Boys Have Strong Showing at Butler Invite
April 23 D9 Softball: Page Helps Coudy Walk Off Jburg; Port Outslugs Smethport; St. Marys Hands DCC Rare Loss
We use cookies on our website to give you the most relevant experience by remembering your preferences and repeat visits. By clicking “Accept All”, you consent to the use of ALL the cookies. However, you may visit "Cookie Settings" to provide a controlled consent.
Cookie SettingsAccept All
Manage consent