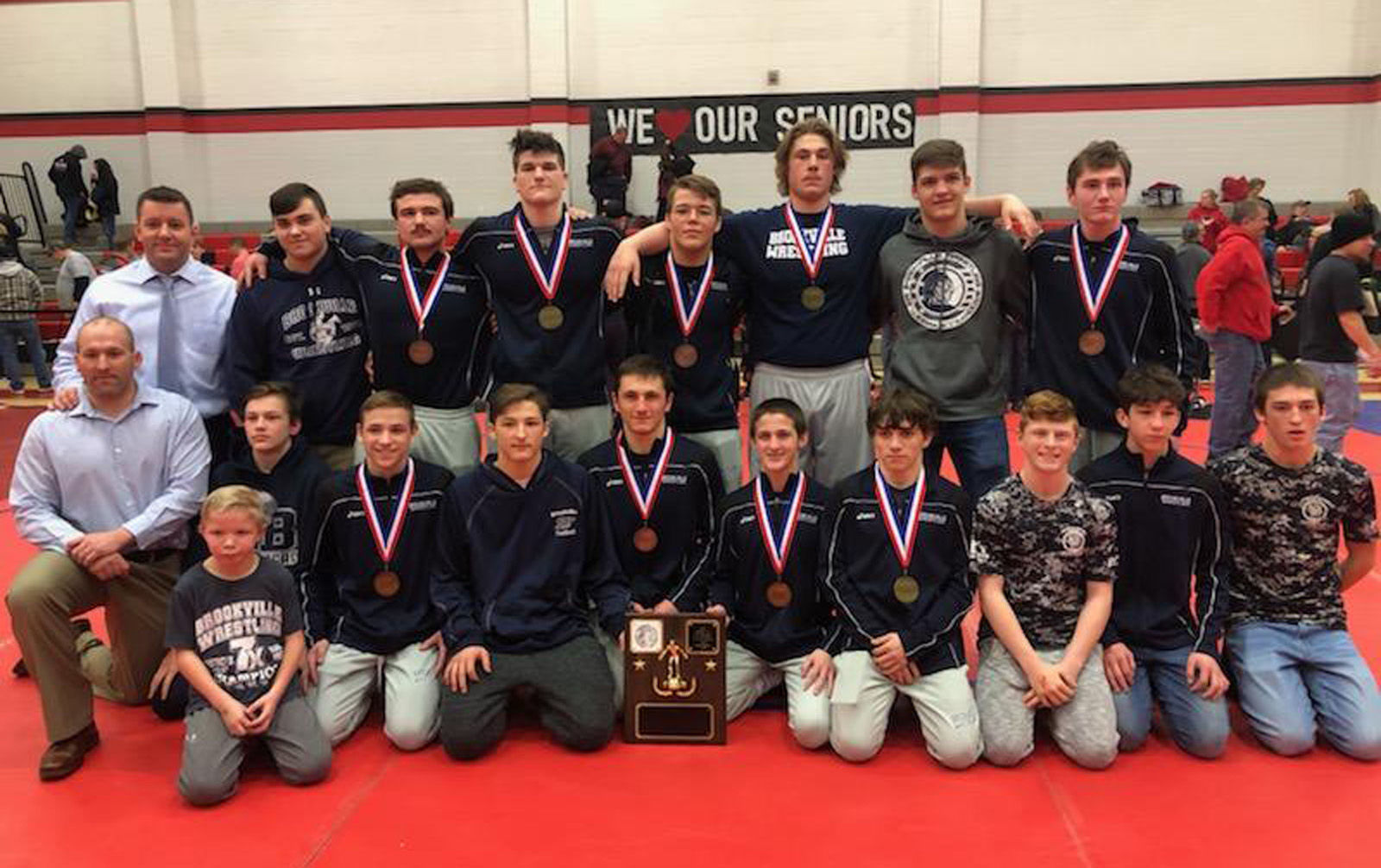 Included are capsules representing programs for which coaches returned emailed questionnaires to D9and10Sports.com.

Brockway aims to finish in the top three at the District 9 championship, a very realistic goal considering head man Eric Grecco has a squad of grapplers with a lot of wrestling experience. Work in the practice room has focused on making small adjustments in all positions that will help ensure the Rover wrestlers’ technique is on point. Returning are Weston Pisarchick (113), Mark Palmer (132), Garret Park (138), Dylan Bash (145), Jack Smith (172), Seth Stewart (189), and Gavin Thompson (285). New to the varsity are Parker Pisarchick (126), Colton Ross (132), and Blake Pisarchick (152). The Rovers started their season at the Darren Klingerman Invitational (Dec. 10-11), finishing third in a 20-team field. Weston Pisarchick, Palmer (138), and Stewart won championships, while Parker Pisarchick earned runner-up status. Other notable performances were a third-place by Thompson, a fifth-place by Blake Pisarchick, a sixth-place by Bash, and an eighth-place by Smith. Assistant coaches are Jason Bash and Bruce Grecco.

Last season Brookville captured their ninth consecutive District 9 2A dual team championship and won the 700th dual in program history. Head coach Dave Klepfer’s aim is to continue winning championships; his goal this season is to again claim district crowns in both formats (team and individual). Helping achieve this aim will be his team’s depth, as this is year’s edition of the Raiders is one of the largest Klepfer has ever coached. With only five seniors on the roster, the focus will be getting his younger grapplers up to speed in the practice room. Key returners are Jared Popson (113), Logan Oakes (138), Owen Reinsel (132), Brayden Kunselman (138), Brecken Cieleski (145), Josh Popson (152), Jackson Zimmerman (189), and Bryce Rafferty (215). Newcomers include Owen Fleming (120), Cole Householder (126), Kolton Griffin (160), Gavin Hanna (160), Gavin Kelly (160), and Easton Belfiore (172). The Raiders went 5-0 at the Sheetz Kick-off Classic to start the season (Dec. 11); downing Eisenhower (66-9), Union City (60-16), Greenville (45-18), Seneca (69-0), and Saegertown (39-20). Reinsel also picked up his 100th career victory at the tournament. Assistant coaches are Mick Stormer, Brett Smith, Eli Morres, Garret Hurd, and Scott Park.

Head coach Mike Votano doesn’t believe his team will be highly competitive in duals this season, primarily because they will forfeit too many weight classes. That being noted, he expects his wrestlers to do very well individually and, as such, the Rams schedule is built with that strength in mind. Returning are Kaden Dennis (172), Rayce Millard (145), Collin Porter (138), Aiden Zimmerman (160), and Aiden Bitler (152). Several of these grapplers will be able to compete for district titles, with a few having the potential to reach states and then medal in Hershey. The Rams opened the season Dec. 10-11 at the Hickory Invitational Tournament, placing 17th in the field of 24. Kaden Dennis was a runner-up at his weight, with Bitler taking eighth place. Assistant coaches are Eric Iorfido, Casey Zimmerman, and Dylan Nelson.

Mike Swartwood, Jr. moves up from Kane’s junior high program to take the reins of the Wolves varsity. His main expectation is that his wrestlers get better each week, with the aim of sending at least six grapplers to regionals. He is excited to have guys who are starting to “turn the corner” and start winning matches that are within reach. Key returners are Luke Ely, Harley Morris, Ethan Illerbrun, Alex Bechakas, Reece Bechakas, and Addison Plants. Kane opened the season at the Hickory Invitational Tournament, placing eighth. Morris (138) finished third; Reece Bechakas (145) and Ely (160) fourth, Plants (172) fifth, and Kayin Bard (106) seventh. Swartwood, Jr. is assisted by Rich Hunt, Louis Crawford, and Keaton Rounsville.

Head Coach Brad Greenman enters the 2021-2022 season with a very young team, including a large group of freshmen. Despite this, Greenman still wants his squad to contend for the AML title and compete at the district level. To do this, gaining experience at the varsity level will be key, as well as learning not to get too high or low emotionally over the course of a long, intense season. On the “plus side” of the ledger, Port Allegany is a driven team that has depth in the upper and middleweights. The Gators will be led by senior Chase Weimer (126). Greenman will also be counting on two freshmen that will man the upper end of the line-up; Juuso Young (189) and Carson Neely (285). Port Allegany started the season at the Hickory Invitational Tournament, finishing seventh with strong individual performances by Ian Dynda (runner-up at 145), Weimer (third), Caleb Ferguson (fifth at 160), Miska Young (fifth at 215), Juuso Young (seventh at 215), and Kai Stauffer (eighth at 113). Greenman is assisted by Chad Saltman, Adam Greenman, Nate Schwab, Nick Budd, and Brian Neal.

The Bulldogs have a large team this year, though experience will be somewhat lacking for a program that just captured its 600th win in school history. Additionally, because Redbank Valley advanced to the state championship football game, many wrestlers are just getting into the practice room. Conditioning will be key, with head coach Mike Kundick planning to use December as a big scrimmage, a chance to get his grapplers into wrestling shape and accustomed to being back on the mat. Key returners are Daniel Evans (106/113), Cole Bish (113/120), Ridge Cook (126/132), Jacob Kundick (132/138), and Karsen Rupp (215). The Bulldogs began the season at the Hickory Invitational Tournament, finishing in 19th place. Evans was the highest placing Bulldog wrestler, claiming fifth at his weight. Assisting Kundick will be Deven Laird, Ruben Carrillo, Doug Songer, and Brylee Shumaker.

New head coach Garrett Brown is looking for his squad to go out and win every match, both individually and as a team. Though the Beavers will have a few holes in the line-up, he still looks to compete at a high level with each wrestler giving 110% every time the step on the mat. The key to the team’s success will be the practice room, where Brown is seeking to foster a culture of success, individual belief in self, and embrasure of the sport’s grind. Returning are Ryan White (189), Austin Mitchell (152), Davey Augenbaugh (138), Brendan Orr (132), and Zach Gallagher (285). New to the team is Carter Wilson (145). DuBois opened its season at the Eastern Area Invitational (Dec. 10-11), placing sixth out of 20 teams. Brendan Orr was a runner-up at his weight, Tycen Roy (215) and Gallagher took seconds, and Augenbaugh claimed third. Assistant coaches are Denny Nosker, Tony Geer, and Brock Adams.

Despite losing some good seniors to graduation, head coach Dom Surra’s goal is, as always, for the Flying Dutch to win the D9/4 team championship. Though Saint Marys might be in rebuild mode, there is a reason for optimism; the team bonded well in the preseason, there is a growth mindset surrounding the program, and the wrestlers are working hard in the practice room. Key returners are Andrew Wolfanger (145), Tristan Dilley (145/138), Isaac Dellaquilla (152/160), Lane Dellaquilla (152), Waylon Wehler (172), Kaden Snelick (160), and Colton Swanson (285). Newcomers include Aiden Beimel (106), Jaden Wehler (134), and Cole Neil (113), who is returning after a few years away from the sport. The Dutch started the season at their own Saint Marys Kickoff Classic on Dec. 11, finishing second in the nine-team field. Individual champions included Wolfanger, Issac Dellaquilla (160), and Wehler. Dilley was runner-up at 152, while Snelick was third at 152. Also having good tournaments were Bryson Tucker (fifth at 215), Grant Jin (sixth at 160), Ethan Ott (sixth at 285), and Evan Caskey (eighth at 189). Surra’s assistant coaches are Sam Simchick, Brian Fenton, Sam Miller, Josh Meyer, and Dan Snelick.

Bradford Boys Rally Past Otto-Eldred; Coudy Falls at Joe DeCebro To.
Dec. 20, 2021 District 9 and District 10 Basketball Scores
We use cookies on our website to give you the most relevant experience by remembering your preferences and repeat visits. By clicking “Accept All”, you consent to the use of ALL the cookies. However, you may visit "Cookie Settings" to provide a controlled consent.
Cookie SettingsAccept All
Manage consent