Week 4 D10 Football: Just One Battle of Unbeatens, but Plenty of Intrigue 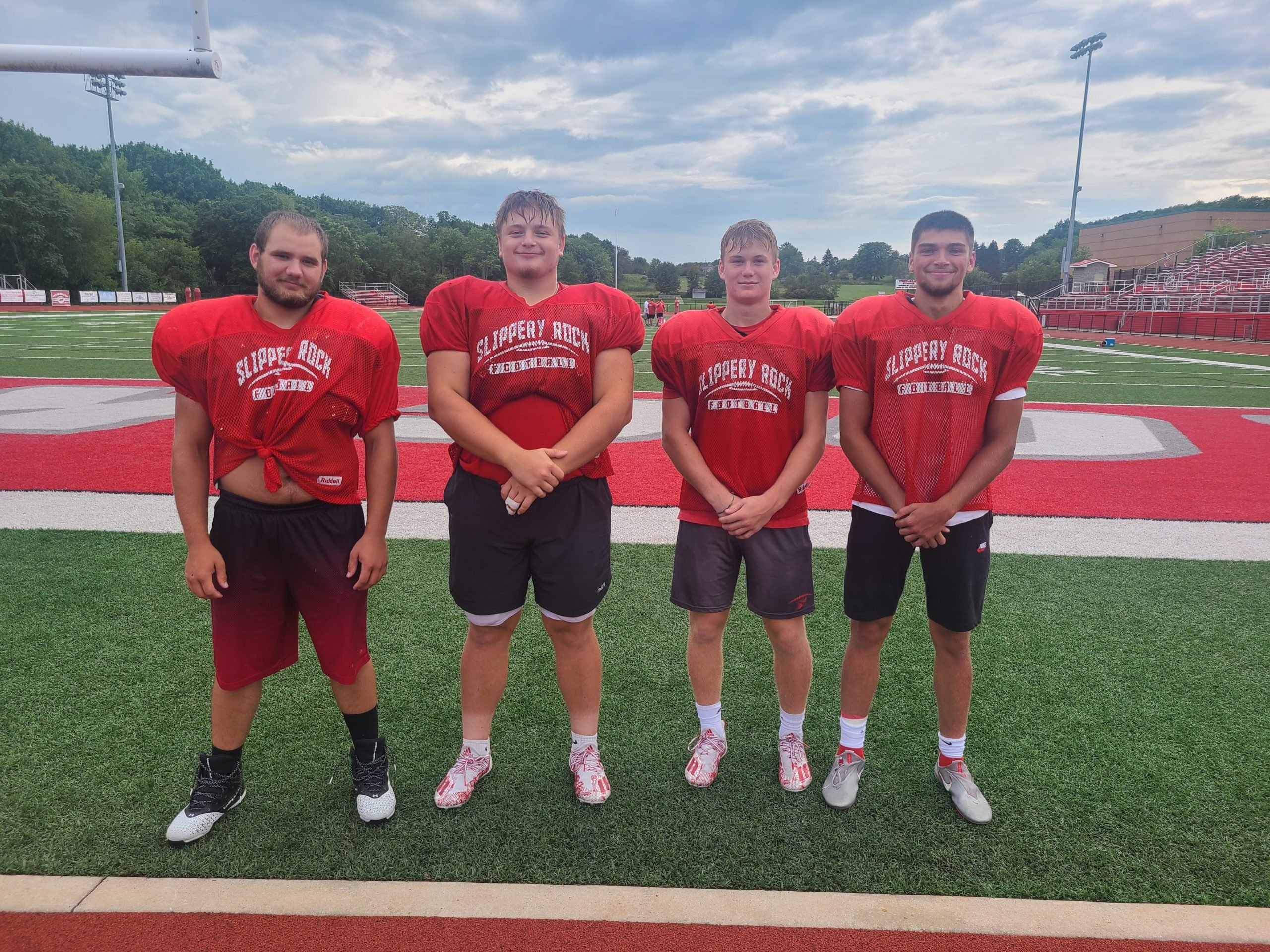 COVID-19 continues to rear its ugly head when it comes to the District 10 football schedule.

A total of six games that were originally scheduled for this weekend have been canceled, with Titusville, Cambridge Springs, Lakeview, Mercer and Seneca not playing football games this week because of COVID-19 issues.

The schedule features a number of intriguing matchups, but just one involving unbeaten teams, with Eisenhower traveling to Cochranton. Ike was originally supposed to play Seneca, and then Mercer.

Here’s a brief look at each matchup

Wilmington will look to bounce back after having its 22-game regular-season win streak snapped at the hands of Liberty-Benton out of Ohio last week. Luke Edwards had an 80-yard touchdown run in that game and getting that ground game established will be critical for the Greyhounds.

They meet a Greenville team that is coming off a 33-7 loss against Sharpsville. Levi Swartz leads the running attack with 240 yards and five touchdowns, while Jalen Ritzert has thrown for 263 yards, 163 of which have gone to Jace Herrick.

The lone unbeaten matchup pits the Knights against the Cardinals. The Knights are coming off a 55-14 win over Class 4A Franklin. They feature the three-headed rushing attack of Keegan Eckstrom (318 yards, four touchdowns), Benji Bauer (276 yards, 5 touchdowns) and Shawn Pascuzzi (167 yards, three touchdowns) running behind a strong offensive line. When they do go to the air, Garrett Jensen has been efficient, throwing for 239 yards, 138 of which have gone to Wyatt Lookenhouse.

Cochranton is playing a region-only schedule this season and looked impressive in coming off a 41-8 win over Seneca. Jack Martinec scored four times last week and on the season has rushed for 398 yards. Stephen Martinec has 137 yards on the ground as the Cardinals do almost all of their work on the ground.

Another Region 2 unbeaten, Northwestern, readies for Saegertown after sitting out a week. Ryan Tewell is a do-it-all quarterback for the Wildcats, throwing for 268 yards and four scores and adding two more touchdowns on the ground. Jake Kelly (129 yards) is the leading receiver and Ben Campbell (158 yards) and Gage Hanisek-Brockett (116 yards) the leading rushers.

They will be facing a Saegertown team that has played just one game this season, a 14-0 loss to Eisenhower back in Week 1. In that game, Zach Yoder rushed for 69 yards.

A pair of teams looking to get back on track. Maplewood hasn’t played since a 54-0 loss to Northwestern in Week 2, while it’s been three straight defeats.

The Tigers will look to get the running game going, led by Ben Gilberto, who had a strong Week 1 performance in a 35-7 win over Iroquois. Union City meanwhile has a pair of players that have eclipsed 200 yards rushing on the season in quarterback Kyler Shaffer and back Owen Kerns. Shaffer has also thrown for 134 yards.

Hickory will look to bounce back from a heartbreaking loss to rival Sharon last week, a game in which they led 14-7 going into the fourth quarter. They will be facing a Conneaut team that already has four games under its belt.

Quarterback Logan Woods has thrown for 500 yards through three games with five touchdowns and four interceptions. Three of those touchdowns have gone to Keenan Scullin to the tune of 337 yards, while Ramarion Whitehead has 102 yards and two scores. Sean Kennedy (178 yards) leads the ground game.

Conneaut will look to do most of its work on the ground, led by Zach Rice (429 yards, 7 touchdowns).

A Week 4 showdown pits the Eagles against the Rockets. Grove City is coming off a 42-20 win over Conneaut (Ohio), while Slippery Rock has had COVID-19 wreak havoc so far, but not on their end. The Rockets have had to scramble to find games each week, but were unable to do so after Titusville was forced to cancel last Friday.

Slippery Rock is led by quarterback William Mokel, who has thrown for 343 yards and five touchdowns and rushed for another score. Shane Thompson has 139 yards on the ground and also 148 yards receiving, while John Sabo has 123 yards receiving.

Two teams in search of their first win, with the Lakers playing just one game thus far due to COVID-19. Girard is led by Gunner Bax (247 yards rushing, 102 yards receiving.) and Zach Lowe (132 yards rushing). The Lakers opened last week with a 42-7 loss to Fort LeBoeuf.

The Bison look like a real contender while North East was able to pick up its first win of the season last week over Corry.

It’s been a tough start to the season for the Eagles, while the Lancers return following a bye week after beating Oil City and falling to Meadville.

John Amon has done a little bit of everything for GM through two games, catching a touchdown pass and rushing for 256 yards and three scores. Dylan Sheeder is the signal-caller for the Lancers, throwing for 235 yards.

After a pair of Region 5 wins to start the season, Warren dropped a tough one at Cathedral Prep last week, while it’s been tough sledding for the Knights.

Quarterback Cole Buckley and back Carson Wible lead the Knights, who have lost to Harbor Creek, Fairview and Eisenhower.

A Region 6 showdown has the unbeaten Trojans hosting the Golden Tornado. Artis Simmons, Christian Santiago and Ray Jackson have all eclipsed 100 yards rushing for McDowell, while Been Moore has thrown for 224 yards.

Butler is coming off an impressive 27-13 win over Meadville and is led by do-it-all Cooper Baxter, who has 236 yards rushing, 141 yards passing and six total touchdowns through two games.

The Braves picked up their first win of the season last week, 28-18 over Union City, while Kennedy Catholic is still looking to dent the win column. Ravion Wilbon-Venable has thrown for 288 yards and three touchdowns for the Crusaders, with almost all of the damage going to Simeir Wade (212 yards, 2 scores). Michael Hoopsick is coming off a strong game in the win over UC and has 252 yards rushing through two games.

After a pair of losses to Prep, Erie trailed Harbor Creek 7-2 at halftime last week before rallying for a 36-20. Marquell Darnell showed why he is one of the best players in District 10, hauling in three touchdown passes, with Denzel Driver and Adrian Tate each throwing for a pair of scores. Jermaine Selby eclipsed 100 yards on the ground and also scored a touchdown.

They will be facing a Brasher team that lost to McDowell 38-14 in Week 2.

A late add, and it should be a good one. Sharon is coming of the dramatic 14-7 win over Oil City, while the Oilers are coming off a bye following a win over Conneaut (Pa.)

Watch out for do-it-all star Ja’on Phillips for Sharon, who has 271 yards receiving and is a major threat in the return game as well. Mikey Rodriques, who scored the game-winning touchdown against Hickory, has 340 yards passing and 83 rushing for the Tigers.

The last time Oil City was in action, Ethen Knox rushed for 285 yards and three touchdowns and also added a punt return for a score. The Oilers will look to get that ground game going once again.

The Ramblers are rolling, coming off two straight wins over Erie before a triumph over previously unbeaten Warren, allowing just 12 points in the process. They get it done with a balanced attack on offense. Mike Parks (275 yards, five touchdowns) and Suhtaun Lewis (209 yards) are both over 200 yards on the ground, while Carter Barnes has thrown for 325 yards, seven touchdowns and no interceptions. His favorite target is DeMario Crawford (158 yards, five touchdowns).

After an emotional win over Greenville that was played at West Middlesex, the Blue Devils got a game late Thursday, it was announced, with Jefferson, Ohio. The Blue Devils’ stout defense has yielded single-digit point outputs in two of three games this season. Offensively, Zach Tedrow (129 yards rushing, 48 passing, 42 receiving) does a little bit of everything. Chris Roth (174 yards rushing), Caullin Summers (263 yards passing, three touchdowns) and Garen Levis (94 yards receiving) are other players to watch.

You Pick The Winner of Select Football Games in Week Four 2021
Week 4 D9 football: 3 games scratched (so far), 6 still unbeaten
This website or its third-party tools process personal data.In case of sale of your personal information, you may opt out by using the link Do not sell my personal information.
×
Manage consent