Week 2 in District 10 Features Three Days Worth of Games 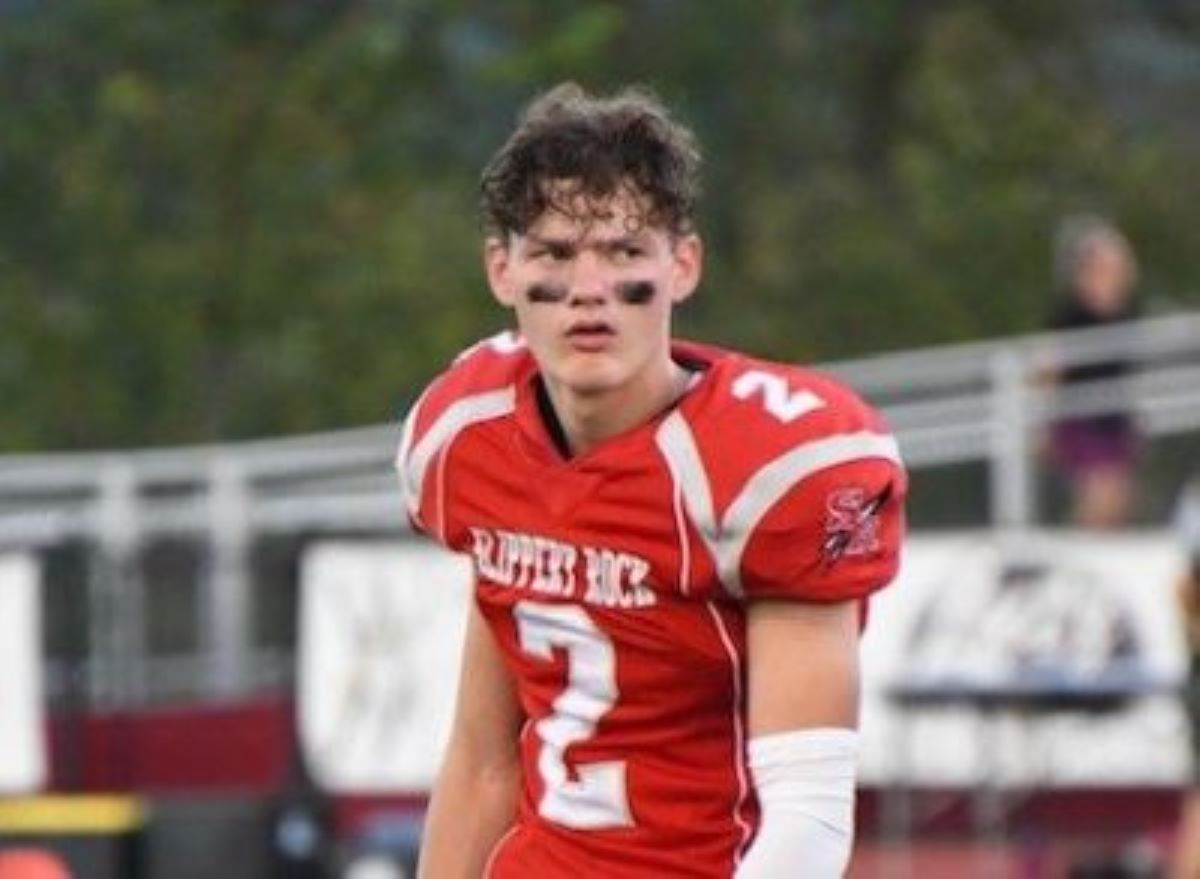 Week 1 of the high school football season across District 10 certainly didn’t lack excitement, as there were several surprises along with a number of notable performances.

Don’t expect a lot of overreaction one way or the other, however. As one coach put it after a Week 1 game – half the teams in Pennsylvania won this week and half of them lost.

This week, a quartet of Thursday games dot the schedule as well as a Saturday showdown between Ursuline (Ohio) and Farrell.

Most of the action again in Week 2 is non-region, with a few region games sprinkled in.

Both of these teams are coming off different kinds of losses to open the season. Saegertown lost in heartbreaking fashion to Maplewood, 34-26, while Lakeview was on the short end of a 40-13 decision to Seneca.

For Saegertown, Sully Zirkle threw for 173 yards and a touchdown to Zach Yoder in the loss to Maplewood.

For Lakeview, Danick Hickson is coming off a strong Week 1 performance with 129 yards on the ground and a pair of scores.

A pair of vaunted rushing attacks square off when Reynolds battles Mercer. Jalen Wagner ran all over for Reynolds in a win over Union City, amassing 291 yards and four touchdowns on just eight carries.

Mercer, meanwhile, had a number of players tote the rock in a win over Iroquois, led by Daemyin Mattocks’ two touchdown runs as well as a kickoff return for a touchdown.

Ben Miller had 99 yards on 11 carries for Wilmington in Week 1.

Greenville, meanwhile, was stopped near the goalline in the waning seconds against Hubbard. Nick Solderich threw for 79 yards in defeat.

Both teams come off losses to 2021 respective region champions in Week 1, as Girard fell to rival Northwestern and North East to powerhouse Farrell.

Despite the loss, Jackson Humes turned in a strong game for North East, rushing for 51 yards, throwing for 58, and accounting for a pair of touchdowns. Gabe Messmer had 139 yards passing and a touchdown and also 59 yards rushing for the Jackets in Week 1.

Fairview is coming off a hard-fought 17-7 win over Mercyhurst Prep, while Harbor Creek hung tough with Hickory before falling 14-10.

Tyler Corbin accounted for a key second-half touchdown for the Tigers in their win, while Jeremy Frazao aided in the victory with a pair of interceptions.

Harbor Creek moved the ball well against Hickory with a pair of 100-yard rushers in Lance Brown and Joe Hulse.

Prep looks to get back on track when they host neighbors to the north Clarkson from Mississauga, Ontario.

Clarkson is coming off an impressive win over Massillon Perry in Canton, Ohio last week.

Prep, meanwhile, will look to give first-year head coach Mike Krahe his first win. Suhtaun Lewis had over 100 yards on the ground in a 47-14 loss to Archbishop Hoban last week.

Oil City looked every bit the part of a District 10 Class 3A title contender in Week 1, racing to a 58-24 win over Warren.

In that game, Ethen Knox ran wild behind a big offensive line, accounting for 304 yards rushing and four touchdowns and also adding a receiving touchdown.

They will be facing a Corry team that hung with Meadville early before falling 55-6.

A pair of teams that got defensive in their Week 1 wins, as Eisenhower blanked Cochranton and Cambridge Springs upended Kennedy Catholic.

The two teams met a year ago, a 14-0 win for Eisenhower. Benji Bauer accounted for over 100 yards rushing and a pair of touchdowns for the Knights in their Week 1 win.

Cambridge Springs, meanwhile, built a 35-6 lead against Kennedy before allowing a couple of late scores. Morgan Applebee accounted for two rushing touchdowns and one through the air, while Van Jones had 134 yards on the ground.

A couple of teams looking to get back on track as Union City hosts Kennedy Catholic.

Simeir Wade flashed his talent for Kennedy in their loss to Cambridge Springs, throwing 99 yards and a touchdown and rushing for 196 yards and two scores.

Clay Thomas had 110 yards on the ground for Union City in their loss to Reynolds.

Maplewood won in thrilling fashion over Saegertown in Week 1, getting a goalline stand at the end of the game. They will look to keep that rolling in Week 2 against Iroquois. For Maplewood, it starts with Ben Gilberto, who rushed for 145 yards in the win over the Panthers.

Iroquois, meanwhile, got 51 yards rushing and a touchdown from Sean Divins in a 38-7 setback to Mercer.

Slippery Rock showed off its immense talent at the skill positions in a 37-20 win over General McLane, as Maddox Allen had 79 yards rushing, Zip Mokel threw for 192 yards including touchdowns to Eli Anderson and John Sabo, with Sabo putting the game away with a 98-yard kickoff return.

They will face a Mercyhurst Prep defense that held its own in a 17-7 loss to Fairview. David Bahm threw for a touchdown in the loss for the Lakers.

Northwestern put up 45 points against Girard, while the Grove City offense looks to get back on track following a 27-7 loss to Avonworth out of the WPIAL.

Hunter Hohman threw a 49-yard pass in that game, but that was about it for the Grove City offense, as their lone score came on defense.

Northwestern, meanwhile, got 223 yards through the air from Lloyd Fountain and 108 on the ground from Ben Campbell.

Seneca looks to keep the momentum going and start 2-0 when they square off with Conneaut.

In a 40-13 win over Lakeview, Seneca got 166 yards rushing from Ryan Miller and 94 more from Nolan Seabury.

Conneaut got a late rushing touchdown from Ethan Stright, who had 61 yards on the ground in a 63-6 loss to Fort LeBoeuf.

Both teams played similar games in Week 1, with Franklin falling to Titusville 14-13 and Hickory rallying for a 14-10 win over Harbor Creek.

Logan Woods and William Acrie hooked up a pair of touchdowns for Hickory, including an 88-yard go-ahead score in the fourth quarter. Woods threw for 193 yards, 146 of which went to Acrie.

Franklin, meanwhile, will look to rely on quarterback Hunter Marstellar, as well as Cole Buckley. Buckley had 98 yards receiving and a touchdown in the loss to Titusville and also intercepted two passes on defense.

Both teams look to get back on track after Warren fell to Oil City 58-24 and Sharon lost to Neshannock, 45-28.

For Sharon, Jayveerh White rushed for 92 yards, while Warren’s Eric Dippold threw a pair of touchdown passes to Cayden Wright and Ethan Senz.

Sharpsville is coming off an impressive performance in a shutout over Wilmington, while Titusville earned a hard-fought 14-13 win over Franklin.

For Sharpsville, Caullin Summers had a pair of rushing touchdowns in the 23-0 victory, accounting for 88 yards on the ground. Defensively, the Blue Devils allowed just six first downs.

For Titusville, Brock Covell and Kameron Mong connected on a pair of touchdown tosses, while Nate Stearns sealed the game with a late interception.

A couple of offenses that are already humming after Week 1. For Butler, it starts with quarterback Mac Schnur, who was over 200 yards through the air in a win over Shaler, 35-28.

Meadville, meanwhile, looks to the 1-2 punch of Khalon Simmons and Brady Walker. Simmons had 200 yards rushing and four touchdowns in a win over Corry, while Walker had over 100 yards on the ground as well.

Farrell gets to christen its new turf field when they welcome their neighbors from across the Ohio border in Youngstown.

It should be a dandy of a game, as Ursuline comes in 2-0 and Farrell 1-0 after a 50-20 win over North East. In that game, Kabron Smith threw for 245 yards and a pair of touchdowns to Kylon Wilson, who had 161 yards receiving. Brandon Chambers also showed off his talents as the new feature back.

Ursuline comes in averaging 51.5 ppg. in its two wins, led by running back Christian Lynch, who has rushed for 322 yards through two games and five touchdowns, while quarterback Jack Ericson has thrown for 375 yards.

Erie got defensive in its win over West Toronto Prep, with Toa Grove accounting for the only score of the game in the 7-0 Royals’ win, a 2-yard touchdown run in the first quarter.

St. Joseph, meanwhile, is playing in its season opener.

McDowell scored an impressive 56-37 over Walsh Jesuit in its season opener, as Artis Simmons ran for 295 yards in a 56-37. It was a game in which McDowell led 42-28 at halftime. Ben Moore also showed off his arm, throwing for over 200 yards.

They will be facing a Bennett (NY) team that is playing its first game of the season.

Week 2 – Sept. 1-3, 2022 District 9 and District 10 Football Schedule
JB Graphics Fan Pic(k) of the Week – You Pick the Winners in Week Two 2022
This website or its third-party tools process personal data.In case of sale of your personal information, you may opt out by using the link Do not sell my personal information.
×
Manage consent