Third Time is the Charm for Moniteau, as Lady Warriors Knock Off Redbank Valley in 3A Girls Semifinals 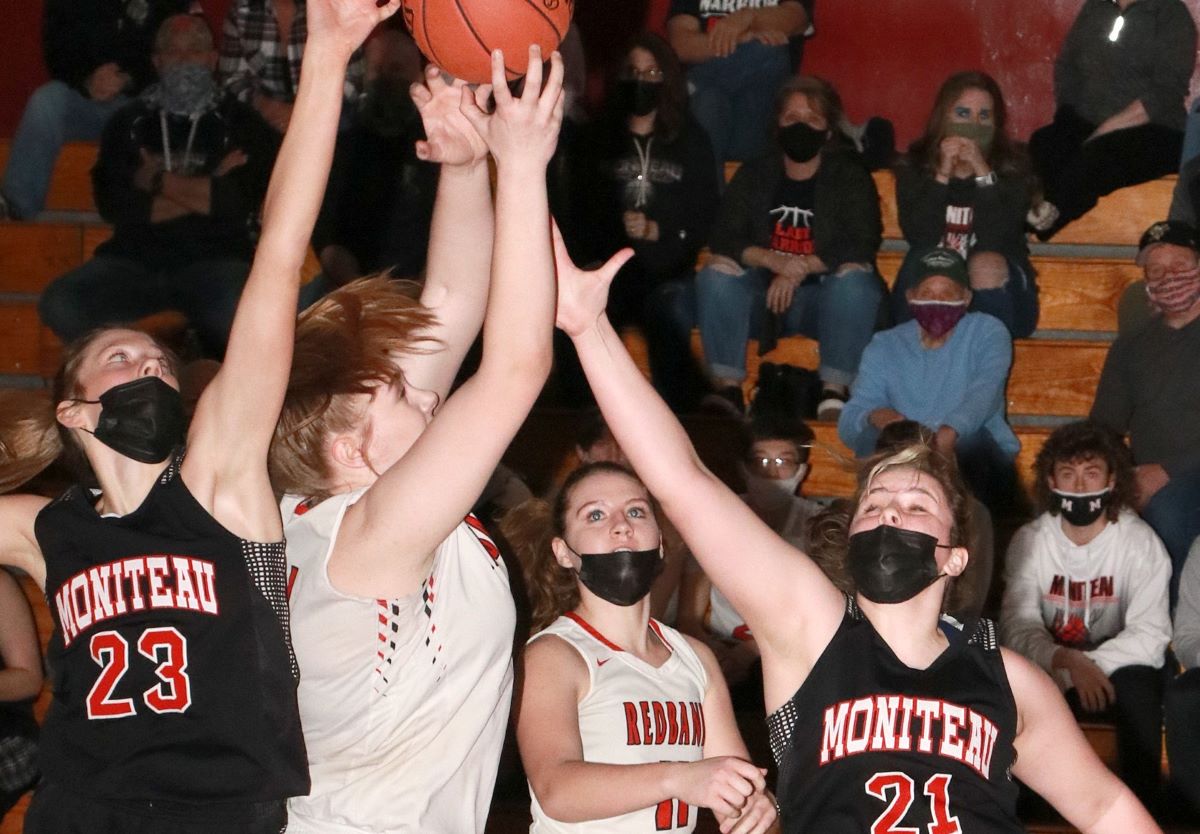 Moniteau's Aslyn Pry (No. 23 black) and Camryn Fallen (No. 21 black) battle with Redbank Valley's Madison Foringer (2nd from left in white) and Emma Huffman (2nd from right in white) for a rebound Wednesday night. Photo by Mike Maslar

NEW BETHLEHEM, Pa. – Hoping that the third time was a charm come playoff time, the Moniteau Lady Warriors pulled away in the second half for a 57-47 win over Redbank Valley in the District 9 Class 3A semifinals Wednesday night.

Losing two games to the second-seeded Lady Bulldogs by the scores of 59-56 and 54-49 during the regular season to its KSAC rivals, No. 3 seed Moniteau (14-9) flipped the result and gets a crack at unbeaten and top-seeded Punxsutawney Friday night. The Lady Chucks routed No. 4 seed Karns City, 49-17.

“It feels great. This was a very big win for us. It was an upset. We weren’t expected to win. I am very proud of my team for getting here. We worked really hard. We have had a lot of younger girls step up. A lot of girls got into today and played well.”

Moniteau’s defense played a big role limiting Redbank Valley, the 2020 D9 2A champion before moving up a classification this season, to a lowly 24 percent (18-for-74) shooting from the field, which included 1-for-12 from beyond the 3-point line.

“Our girls were resilient tonight,” Moniteau head coach Dee Arblaster said. “They were very disappointed with the last loss to Redbank. Redbank is a great team. The girls just executed everything we asked them to.”

Pry also played a big role with a huge performance for the Lady Warriors. She finished with 23 points and 20 rebounds.

Just as important as her statistics was her leadership, according to Arblaster.

“I thought Aslyn Pry took leadership in making sure that the girls knew what we needed to do,” Arblaster said. “She plays with sometimes four freshmen on the floor, and she takes a leadership role and does well.”

Jewart came off the bench to nail four 3-pointers to score 12 points and Kelly finished with 10 points, all in the second half.

“Our freshman group this year, they are a dedicated bunch,” Arblaster said. “They love the game of basketball. They work at their game hard. They are coachable. They do what it takes. I have all respect for them and I have no problem with them being on the floor in crunch time.”

Redbank Valley (15-7) got 14 points each from Madison Foringer and Alivia Huffman.

The Lady Bulldogs led 29-28 at halftime after a first half that saw 13 lead changes. But there were only two in the second half, the second one giving Moniteau the lead for good on the first of two straight Pry baskets with 5:08 left in the third quarter.

Moniteau led 43-39 going into the fourth and extended it to 51-43 with 2:43 left in the game. Kelly scored all 10 of her points in the second half, the first basket beating the third-quarter horn.

Redbank Valley got it to four points at 51-47 with Caylen Rearick’s steal and layup with 2:04 left, but Moniteau closed the game with six straight points for its largest lead.

Moniteau was 21-for-52 from the field, 6-for-19 from the 3-point line with Jewart drilling four of her seven shots from downtown. Fallen added 10 rebounds to go with her two points.

Epic 43-0 Run Gives Keystone Spot in D9 2A Girls’ Title Game; Punxsy Girls Cruise into Ninth Straight Title Game
History-Makers: Lady Rovers Power Past C-L in 2A Semis, Advance to First D9 Title Game
This website or its third-party tools process personal data.In case of sale of your personal information, you may opt out by using the link Do not sell my personal information.
×
Manage consent