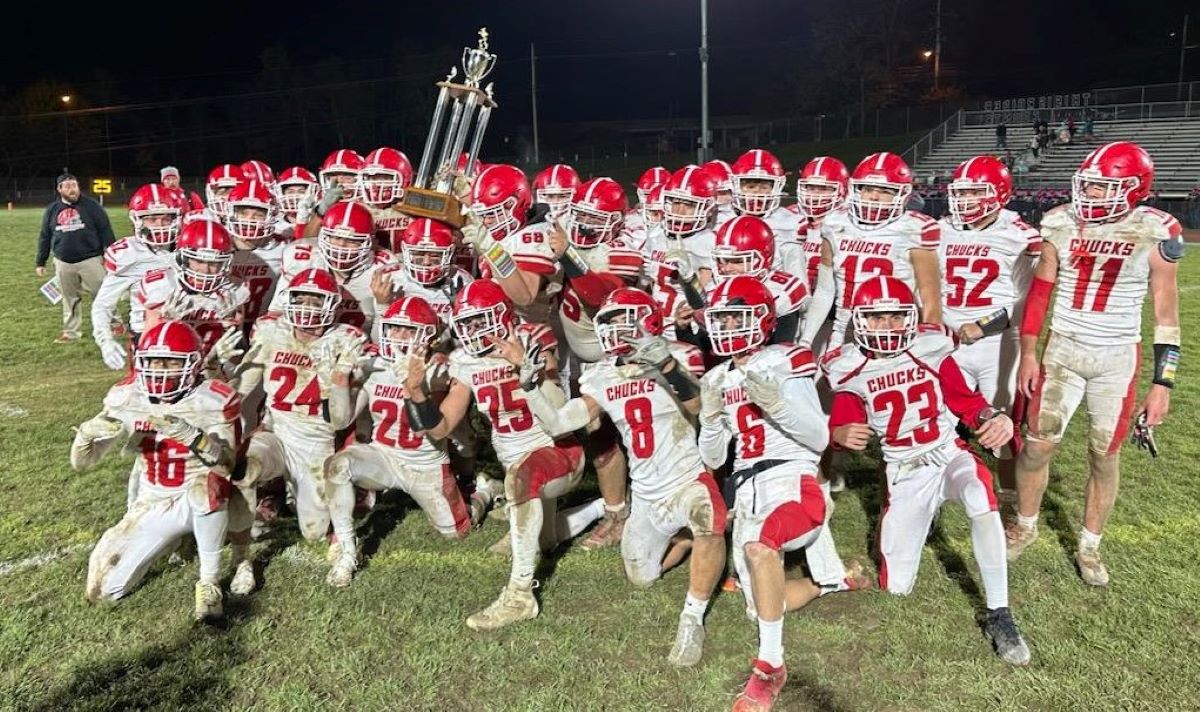 BROOKVILLE, Pa. – For the first time since 2018, the Route 36 Trophy will reside on the southern end of Jefferson County after Punxsutawney went on the road and held off Brookville for a 21-13 win Thursday night.

The Chucks (5-4) led 14-0 following a 12-yard Seth Moore to Noah Weaver touchdown pass with 3:18 to play in the third quarter before Brookville came storming back.

Just 1:38 after the Weaver touchdown, Noah Peterson and Brayden Kunselman combined for a 66-yard touchdown pass with Kunselman finding the end zone to make it 14-7.

Then, midway through the fourth quarter, Kunselman scored again on an 8-yard toss from Peterson to get the Raiders (4-5) to within a point, 14-13.

But on the extra point, Brookville was whistled for having 12 players on the field before it could even snap the ball. Pushed back five yards, Kunselman’s extra point came up short.

The Raiders did get the ball back just inside their own 20-yard line with 2:23 to play following a Punxsutawney punt.

Near disaster struck on first down when Sam Krug fumbled the ball after a short completion from Peterson only to have an alert Peterson, who was trailing the play, fall on the ball at the 21-yard line.

On second down, Punxsutawney’s Mason Nesbitt was called for “holding” Brookville’s Krug, as Peterson was getting sacked. Nesbitt actually didn’t hold Krug but instead pushed him over.

But the referee mistakenly ran the clock, and 18 seconds ran off before Brookville snapped the ball, a play that ended in Peterson being sacked at the 20-yard line.

Brookville head coach Scott Park then started to argue with the officials that the clock should have been stopped (or at least they should have given him the option to stop the clock) before the previous play was run.

According to Rich Rhoades, Sports Editor at the Jeffersonian Democrat, the referee acknowledged he had messed up but couldn’t do anything about it. Then, to make matters worse, the referee, having already admitted to making the wrong call, penalized Park for continuing to argue with him pushing Brookville back to the 10-yard line facing a second-and-31.

Raiders head coach Scott Park argued his point to no avail until getting flagged for 10 yards on unsportsmanlike conduct. Official acknowledged the mistake but couldn't put time back on the clock because the next play had already run. https://t.co/H8HBNpdxkH

On the second-down play, Peterson threw a pass over the middle intended for Kunselman, who was knocked over by the Punxsutawney defender well before the ball arrived with no flag being thrown.

Then, on third-and-31, Peterson heaved up a desperation pass that was picked off by Punxsutawney’s Weaver, who returned the ball to the Brookville 5-yard line.

That should have ended the game with 47.8 seconds left and Brookville down to one timeout.

But, instead of taking a knee, Punxsutawney handed off to Zeke Bennett, who scored on a 5-yard run that put the Chucks ahead by eight, 21-13.

Down eight – a touchdown and a 2-point conversion – Brookville still had a slim chance taking over at its own 30-yard line with 37.1 seconds left.

But an ill-conceived lateral play not only lost five yards but took up 21 seconds in the process while forcing the Raiders to call their final timeout. And a final pass play only got Brookville to its own 25-yard line.

The lone touchdown of the first half was a defensive score by the Chucks when Anthony Gould returned a fumble 28 yards. Nick Wisnesky sacked Peterson on the play with the ball coming loose just before Peterson hit the ground.

Bennett, returning from a one-game absence due to an ankle injury, ran 18 times for 89 yards to lead Puinxsutawney, while Carson Weaver ran 20 times for 77 yards for Brookville, which was playing without leading runner Jackson Zimmerman.

Peterson was 11 of 13 passing for 129 yards, two touchdowns, and an interception with Kunselman catching six passes for 116 yards and two touchdowns.

Wisnesky and Gould both had two sacks for Punxsutawney.

Week 9 D10 Football: Teams Jockeying for Playoff Position Coming Down the Home Stretch
More Week 9 football in D9: Gators trek to Keystone
This website or its third-party tools process personal data.In case of sale of your personal information, you may opt out by using the link Do not sell my personal information.
×
Manage consent