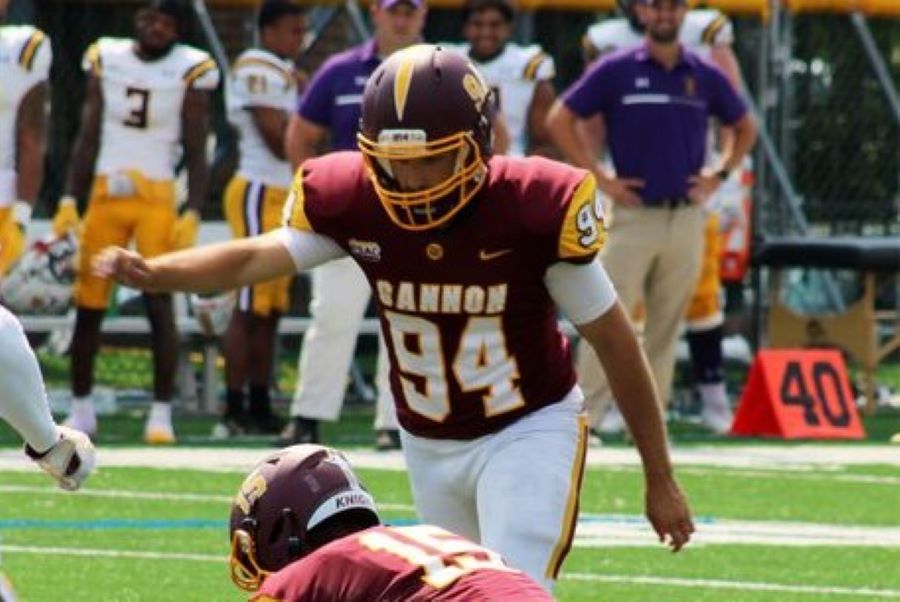 ERIE, Pa. – In what will go down as one of Gannon’s all-time wins, Kory Curtis threw for four touchdowns and ran for two more as Gannon posted its first win over a nationally-ranked team since 2011 with a 43-36 win over 11th-ranked Indiana (Pa.).

The see-saw affair saw eight lead changes before Curtis gave the Golden Knights the lead for good on a one-yard plunge with just over five minutes remaining.

Fort LeBoeuf grad Eric Scarpino was 5-for-5 on extra points for Gannon, while Cathedral Prep alum Jaheim Howard had six tackles for IUP.

CLARION, Pa. – Conneaut High grad Kyle Sheets had 206 receiving yards and two touchdowns as the 13th-ranked Slippery Rock University football team posted a second straight shutout over Clarion and moved into a tie for first place in the Pennsylvania State Athletic Conference Western Division with a 31-0 victory on the road Saturday at Memorial Stadium.

The Rock retained the “Milk Jug” trophy for the fifth straight year and improved to 11-1 in the series against Clarion since the trophy was introduced to the rivalry in 2010. SRU extended its shutout streak against the Golden Eagles to 10 straight quarters, outscoring Clarion 130-0 over that stretch.

The teams entered the half even at 14-14, but Luke Hauger gave Seton Hill a 17-14 advantage on a field goal with 6:22 to play in the third quarter with a 27-yard field goal. The Griffins extended the lead about a minute later when Damonte Pratt returned an interception 35-yards for the score.

ERIE, Pa. – Mylique McGriff and Davonte Williams rushed for 115 and 112 yards respectively, and each scored a touchdown as Cal upended Mercyhurst, 44-20.

Noah Mitchell threw for 210 yards and a touchdown for the Vulcans, who led 30-13 at halftime.