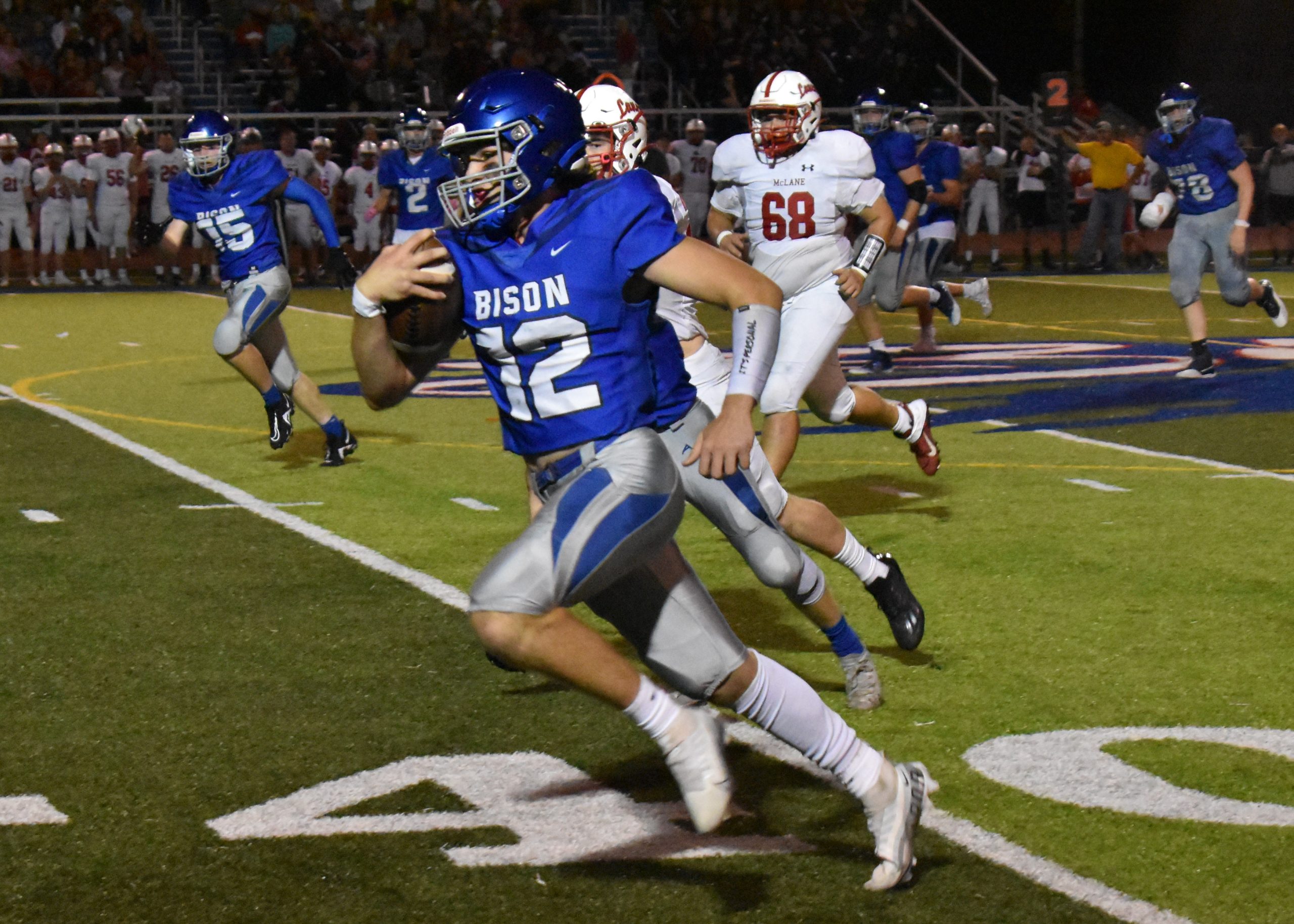 Before District 10 releases its playoff brackets this weekend, there is one final week of games for teams to either tune-up for the playoffs, make their case for the postseason, or simply close the season on a high note.

Reynolds (Region 1), Eisenhower (Region 2), Farrell (Region 3), Meadville (Region 4), General McLane (Region 5), and Cathedral Prep (Region 6) are your region champions, but they aren’t the only teams with high aspirations as we hit the final weekend of October.

All games will be played on Friday, with several teams opting to take a bye week before the postseason. A maximum of eight teams can qualify in Class 1A and 3A and six in 2A. Meadville and Corry are the only 4A teams, as are McDowell and Erie in Class 6A. Cathedral Prep, meanwhile, will enter a Class 5A subregional.

Cambridge Springs scored a big win last week against Mercer, 32-22, and appears primed for the Class 1A playoffs. The Blue Devils have won four of their last five games to put themselves in position. Van Jones and Brett Kania are both over 400 yards on the ground this season, while quarterback Morgan Applebee has thrown for 800 yards and 11 TDs, with Bryce Kanie (5 TDs), Ethan Counasse (3 TDs) and Peyton Gorton (262 yards) his top targets.

Clay Thomas has had a strong season on the ground for Union City, rushing for 769 yards and five touchdowns.

Cathedral Prep has rattled off four-straight wins, including a pair of shutouts. Jyree Roberts leads the defense with 60 tackles, while the Ramblers have intercepted 15 passes this season. Offensively, Luke Costello had thrown for 1,052 yards and 14 TDs, eight of which have gone to Camariyon Bridges, while DeMario Crawford has five receiving TDs and Wakeem Page leads with 463 yards receiving. Suhtaun Lewis (714 yards) and Dajoure Hollingsworth (572 yards) have combined for 17 touchdowns on the ground.

Canisius owns a 29-13 win over Erie earliers this season. Nicholas Penuvchev has thrown for 1,184 yards and nine touchdowns this season.

The Sailors will look to close out the regular season with a win after dropping back-to-back games to Mercer and Reynolds. Mitchell Tingley has put together a strong season rushing with 1,109 yards. The Sailors appear locked into the Class 1A playoffs.

Franklin, meanwhile, dropped a 14-10 heartbreaker to Conneaut last week. Their offense is led by quarterback Hunter Marsteller, receiver Cole Buckley (who had a 69-yard rushing touchdown last week), and running back Toby Sanchez.

A pair of teams bound for the playoffs as Class 3A Fort LeBoeuf visits Class 2A Sharpsville to close the regular season. The game will feature the run-heavy LeBoeuf offense against the pass-happy Blue Devils. Justin Leuschen has rushed for 1,164 yards and 13 touchdowns this season for LeBoeuf, while Ryan Welka has accounted for 400 yards on the ground.

Caullin Summers has turned in a monster season for Sharpsville, passing for 1,812 yards and rushing for 704 more and 19 touchdown passes. Garen Levis has 941 yards receiving and 10 touchdowns. Sharpsville is coming off a 28-21 win over Hickory, while LeBoeuf enters after a 28-6 win over Corry.

With an eye toward the Class 1A playoffs, Eisenhower first has its sights set on completing an unbeaten regular season. The Knights have put together a dominant season on both sides of the ball, led offensively by running back Benji Bauer, who has rushed for a single-season program record 1,613 yards to go along with 20 touchdowns behind a dominant offensive line. Shawn Pascuzzi has thrown for 915 yards and seven touchdowns, with Kris Bunk and Wyatt Lookenhouse the top pass-catchers.

A game that could have an effect on postseason seeding as the Class 1A Mustangs battle the Class 2A Lakers. Daemyin Mattocks leads a run-heavy Mercer attack with 656 yards and 15 touchdowns, while Carter Addison has 480 yards on the ground.

Mercyhurst Prep is led by quarterback David Bahm, who has thrown for 1,494 yards and 19 touchdowns and rushed for 452 yards and six scores. Ja’son Ellman has 695 yards receiving and 10 touchdowns.

The Raiders, along with unbeaten Eisenhower, will be the top two seeds in the Class 1A playoffs. Jalen Wagner broke Reynolds’ career rushing record last week and now has 2,052 yards on the season and 4,558 in his career. Brayden McCloskey has thrown for 1,277 yards. The Raiders’ defense is allowing just over 10 points per game.

They will face a North East team that is much improved under first-year coach Jovon Johnson. Quarterback Jackson Humes has rushed for 1,408 yards and 14 touchdowns this season. Steffan Lynch has 417 receiving yards and Zane Strong six receiving touchdowns.

Seneca is on a roll since starting the season 2-2, having posted five-straight wins, with their 34-26 win over Northwestern last week actually their low water-mark for points in that run. Ryan Miller has run wild and is just 14 yards shy of 2,000 on the season with 26 touchdowns. Nolan Seabury, meanwhile, has thrown for 817 yards and 10 touchdowns and also run for 703 yards and 14 scores. Collin Libra has 453 yards receiving and seven TDs.

Maplewood is coming off back-to-back wins over Kennedy Catholic and Cochranton. Ben Gilberto has put together a terrific season with 1,573 yards and 13 touchdowns.

A pair of teams looking to close their season with wins as Greenville visits Erie County to take on the Huskies. Malachi Hyde leads Greenville’s rushing attack with 591 yards, while Nick Solderich has thrown for 598 yards. Heath Betza has thrown for 872 yards and eight touchdowns for Harbor Creek, while Lance Brown has 625 yards on the ground.

It’s been a tough season for both of these programs, but they have a chance to close the season with a victory. Saegertown has been able to put up points this season, including in a 41-27 loss to Kennedy Catholic last week. They are led by quarterback Sully Zirkle and dynamic multi-sport standout Hank Shaffer.

Both of these teams have had interesting seasons, with Northwestern likely for the Class 2A playoffs and Fairview on the Class 3A playoff bubble. The Wildcats are coming off close back-to-back losses to Eisenhower and Seneca. Lloyd Fountain has thrown for 1,547 yards and 19 touchdowns for the Wildcats, while Ben Campbell has 763 yards on the ground. Fountain also has 10 rushing touchdowns and Logan Stagl and Landon Wayne have combined for 1,000 receiving yards and 12 touchdowns, while Kolton Sutter has seven receiving scores.

Fairview, meanwhile, beat North East in a wild game last week on Michael Gennuso’s second walk-off field goal of the season. Charlie Chevalier and Jared Gennuso have combined for over 1,000 yards on the ground and 10 touchdowns this season, while has thrown for five touchdowns and ran for eight more. Jeremy Frazao has 523 yards and five touchdowns receiving.

A couple of teams that are probably better than their record would indicate, both in search of their fourth win of the season7-. Titusville battled in a 30-14 loss to playoff-bound Oil City last week. Ian McDonald has taken over at quarterback and thrown for 586 yards and seven touchdowns, while Jaxon Covell (454 yards rushing, ,300 receiving) and Kameron Mong (391 yards receiving, 7 TDs) are big-play threats as well.

The Lancers have won eight straight and are bound for the Class 3A playoffs, while Warren sits squarely on the 3A playoff bubble. GM hasn’t given up more than 20 points in any of its eight wins. Dylan Sheeder has thrown for 751 yards and 10 touchdowns and also rushed for 722 yards and 10 scores. Eight different GM players have a rushing touchdown this season.

This is a rematch of a Class 4A semifinal game a year ago, with the Lancers rallying to beat the Dragons. For Warren, which is coming off a loss to Meadville, Tommy Nyquist has 872 rushing yards, 500 receiving yards, and 10 total touchdowns, while Eric Dippold has thrown for 1,321 yards and 13 TDs and Cayden Wright has 529 receiving yards and eight touchdowns.

Meadville has given up seven points or less in seven of its eight wins, including against Warren last week. Brady Walker has 58 total tackles and eight sacks to lead the defense, and also has 1,045 yards rushing and 14 touchdowns. Khalon Simmons, meanwhile, has 1,479 yards rushing and 29 touchdowns and has also thrown for 332 yards and a pair of scores behind another dominant Meadville offensive line. Erie is coming off a 44-0 loss to Cathedral Prep.

McDowell looks to close out the regular season strong against a St. Francis team that owns a 28-26 win over Cathedral Prep. The Trojans have scored at least 48 points in six of their seven wins, including 48-24 over Butler last week. Artis Simmons, a 1,000-yard rusher, leads the ground attack, while Ben Moore has been steady at quarterback this season with a plethora of weapons to throw to, led by Ray Jackson.

St. Francis is coming off a 36-13 win over Canisius. Ricardo Kidd has rushed for 901 yards and six touchdowns, while Steven Otremba Jr. has 834 yards passing and nine touchdowns.

Butler looks to snap a 4-game skid against Latrobe. Mac Schnur has thrown for 1,729 yards and 20 touchdowns, while De’Shawn Cox has 448 yards rushing, 410 yards receiving, and five touchdowns and Braylon Littlejohn has 520 yards receiving and six scores.

Greater Latrobe is coming off a 54-14 loss to McKeesport. Robert Fulton has rushed for 825 yards and 10 touchdowns this season.

2022 District 9 and District 10 Week 10 Football Predictions
Regular-season finales in D9 football
This website or its third-party tools process personal data.In case of sale of your personal information, you may opt out by using the link Do not sell my personal information.
×
Manage consent