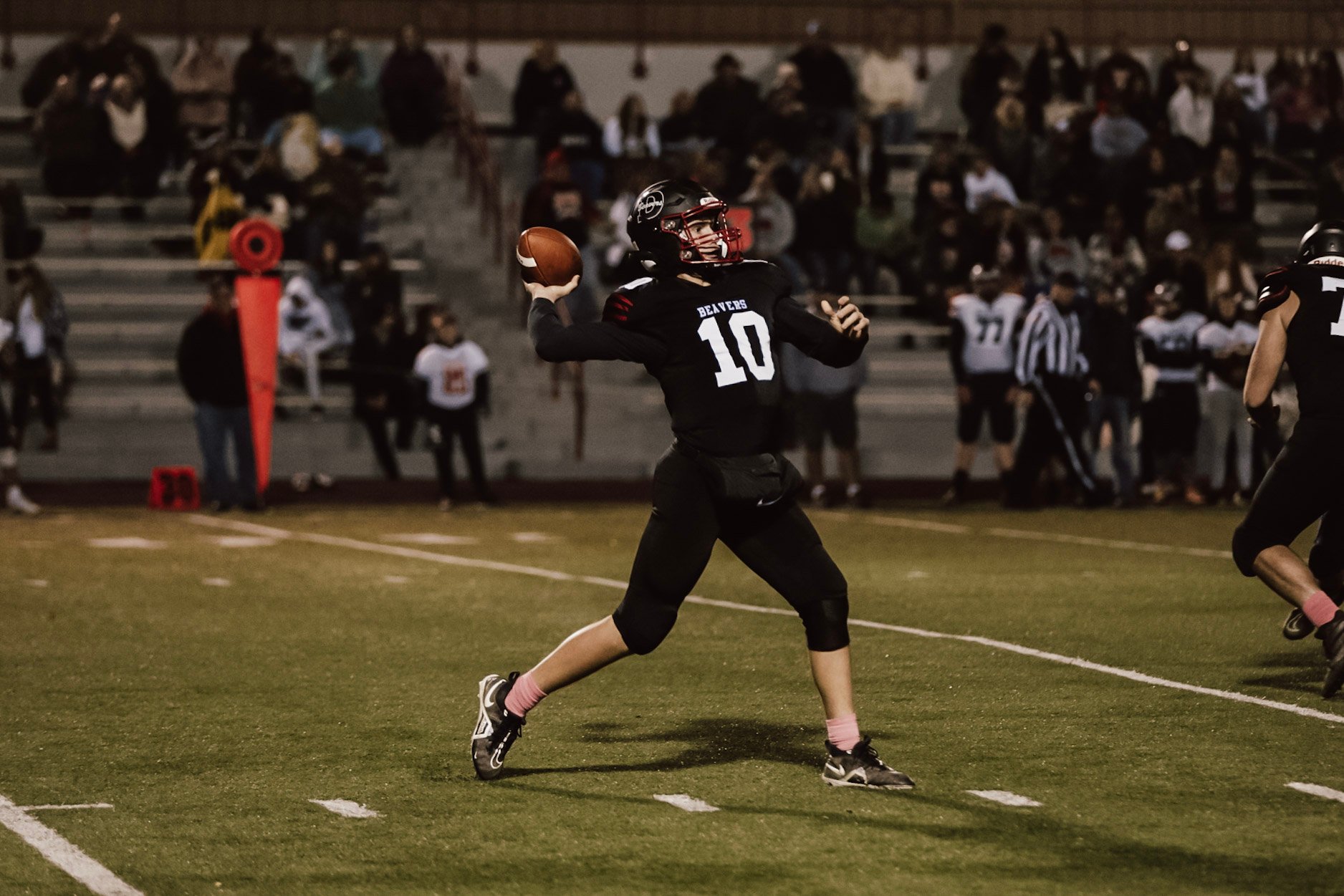 Freshman Trey Wingard threw for 171 yards and a TD for DuBois in the playoff loss to Juniata Thursday. Photo by Anna Mattivi

DUBOIS, Pa. – Juniata went old-school in the second half not throwing a pass, and the outcome was a 17-7 win over DuBois in a District 6-9 subregional game at Mansell Stadium in DuBois.

“Juniata is a solid football team,” DuBois head coach T.J. Wingard said. “They did a really good job on defense. We just didn’t make enough plays on offense. That’s what it is. I thought our defense played well enough to win.”

The Indians (8-3) led 3-0 at the half and then abandoned the pass game in the second half running 30 plays, all on the ground, for 164 yards and two touchdowns.

Juniata basically ran two plays in the second half. A fullback counter by Seth Laub and a tailback sweep by Waylon Ehrenzeller.

“They are good at it,” Wingard said. “They just started wearing us down. Give them credit. They did what they were supposed to do.”

A big reason the Indians went to the ground was that the passing game just didn’t happen in the first half.

Senior QB Aaron Kanagy wasn’t good going 2-for-13 for 66 yards and three interceptions in the half.

All three of those picks came during a wild final minute of the half that saw the teams play hot potato with the football combing to throw five interceptions between the 54-second mark and the 2-second mark in the half.

But despite getting three of those interceptions and having the ball inside Juniata’s 40-yard line three times in the final 54 seconds, DuBois couldn’t score.

“That would have been momentum, no doubt,” Wingard said when asked if the game might have changed if the Beavers (5-6) had been able to score before the half.

But instead of scoring, DuBois watched freshman QB Trey Wingard throw a pair of interceptions of his own and then decided to run out the clock after getting a third interception of Kanagy in less than a minute.

Ben Hickman had two of the picks for the Beavers.

His first interception set DuBois up at the Juniata 41-yard line with 54 seconds left in the half, and a 14-yard pass to Dalton Yale got the Beavers to the 27-yard line.

But Laub intercepted Wingard at that point.

One play later, however, Hickman had his second interception of Kanagy, returning the interception to the Juniata 22-yard line.

On the next play, Wingard took a shot for the end zone only to have Casey Smith intercept the pass in the end zone.

But with 14 seconds left, instead of being satisfied with the 3-0 halftime lead, the Indians decided to push the ball downfield only to have Nathan Kougher intercept the ball and return it to the Juniata 37-yard line with just over two seconds to play.

Instead of trying another pass, DuBois kept the ball on the ground with Garrett Nissel, who went for 15 yards as time ran out.

A late flag was thrown on the play, but after a long discussion the officials waved off the marker and the game went to the half with the Indians up, 3-0.

DuBois got some bad news at halftime when it found out that a pair of its top playmakers – Kougher and Cam Ron-Hays – weren’t going to be available in the second half because of injuries.

Without those two, the Beavers struggled on offense in the third quarter running just eight plays for nine yards.

Juniata, meanwhile, was able to extend the lead to 10-0 on its first drive of the second half with Waylon Ehrenzeller, who hadn’t played since Oct. 7, scoring on an 11-yard run.

Ehrenzeller then found the end zone again 1:13 into the fourth quarter on a 24-yard run that pushed the Indians lead to 17-0.

DuBois finally got some offense going through the air in the fourth quarter and answered back with a 7-play, 65-yard drive that saw a short pass from Wingard to Garrett Frantz turn into a 32-yard touchdown to cut the deficit to 10, 17-7, with 8:18 to play.

The Beavers got the ball back with 4:19 to play at their own 31-yard line after stopping Juniata on downs, but DuBois was only able to reach the Juniata 33-yard line before turning the ball over on downs at the 37 with 1:18 left ending the game.

Ehrenzeller paced Juniata with 131 yards on 22 carries with Laub adding 59 on 11 totes.

Wingard, only a freshman, was 17 of 32 passing for 171 yards, a touchdown, and two interceptions.

Fellow freshman Jaxson Hanzley had five catches for 41 yards, while junior Ryan Clark added three for 24 and Frantz two for 49. Hays had two grabs for 37 yards in the first half before exiting with the injury.

Despite getting a lot of young players involved in a postseason game, T.J. Wingard was more concerned for his seniors, who played their final game.

“We will worry about next year when we are done with this,” T.J. Wingard said. “Right now, we are just going to hang out and take care of these seniors that had to play their last game tonight.”

Juniata will take on the winner of the USO/Meadville game being played Saturday, in a PIAA first-round contest next week at a site and time to be announced.

2022 District 9 and District 10 Week 12 Football Predictions
Class 3A final tonight: Bison and Dutch
This website or its third-party tools process personal data.In case of sale of your personal information, you may opt out by using the link Do not sell my personal information.
×
Manage consent