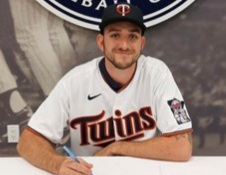 Mineo will report to the Twins’ spring training facility in Fort Myers, Florida for the remainder of the summer as he embarks on his professional career.

A Slippery Rock native, Mineo came to The Rock as a freshman prior to the 2019 season following a standout career at Slippery Rock High School.

Mineo made 27 appearances over the last four years for SRU, going 10-5 with one save and a 3.23 ERA in 108.2 total innings. The 6-5, right-hander struck out 156 batters over his collegiate career while holding opponents to a .195 batting average.

A two-time All-Pennsylvania State Athletic Conference Western Division honoree, Mineo leaves The Rock ranked 10th in program history for strikeouts in a career and 14th in ERA. Additionally, Mineo had a part in two combined no-hitters during his collegiate career – April 4. 2019 vs. Wheeling along with Joe Dombrowski and March 6, 2022 with Travis Holman.

Mineo followed up a breakout campaign in 2021 by putting together a stellar 2022 season in which he was 6-4 with a 2.84 ERA and 85 strikeouts through 66.2 innings as he helped to lead The Rock to a 33-18 record that included berths into the PSAC and NCAA Tournaments.

In addition to ranking sixth across the PSAC, Mineo’s 85 strikeouts were the fourth-highest single-season total in program history. He also ranked seventh in the nation in hits allowed per nine innings (6.08) and 36th in WHIP (1.09).

Most recently, Mineo played for the Mahoning Valley Scrappers in the MLB Draft League, a collegiate summer baseball league that was created by Major League Baseball and Prep Baseball Report to serve as a showcase for top draft-eligible prospects. Mineo was 1-0 with one save in seven appearances for the Scrappers.

Mineo becomes the latest in a long list of former Slippery Rock baseball student-athletes that have joined the professional ranks.

Local Ties Stick with Mike Sirianni as He Begins His 20th Season as Head Football Coach at W&J
Pitt Announces 12 Members of 2022 Hall of Fame Class
This website or its third-party tools process personal data.In case of sale of your personal information, you may opt out by using the link Do not sell my personal information.
×
Manage consent