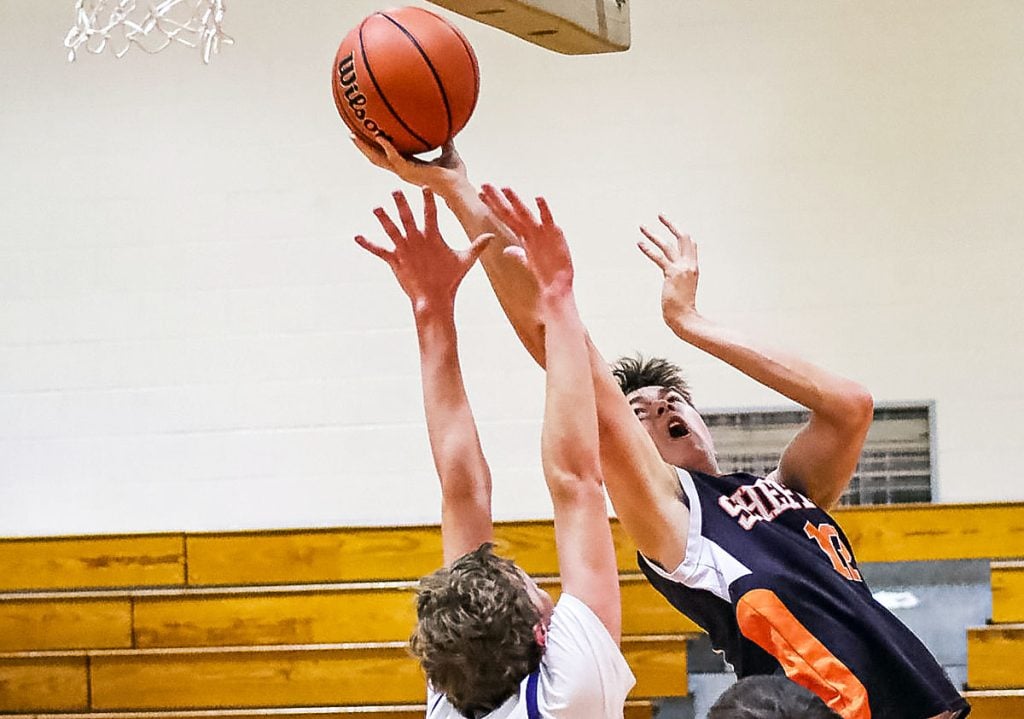 SHEFFIELD, Pa. – Sheffield did the unthinkable getting shutout in the first quarter but finding a way to rally and beat Smethport, 45-36, in the opening round of the Sheffield Sports Boosters Christmas Tournament.

The Wolverines trailed 12-0 at the end of eight minutes of action and were down 14-0 until Austin Fiscus scored on a putback 30 seconds into the second quarter.

Connor Finch was the catalyst for the comeback scoring 10 of his 13 points in the second quarter. He also added four rebounds and four blocked shots in the win.

The Wolverines then took the lead, 35-34, by the end of the third quarter with Silvis hitting two more 3-pointers and scoring eight of his 11 points in the frame.

Lucas McNeal and Wotorson each chipped in seven points in the win.

SHEFFIELD, Pa. – Ricky Zampogna poured in 22 points as Kane beat Youngsville for the second time this season, 62-41 in the opening round of the Sheffield Sports Boosters Christmas Tournament.

Kane raced out to a 20-7 lead after the first quarter en route to the win.

Sam Lundeen poured in 16 points for the Wolves and Landon Darr 14 points, including four 3’s.

Koby Hendrickson had a team-high 20 points for Youngsville, while Alex Hill and Ethan Senz had seven apiece.

FARRELL, Pa. – Malachi Owens scored a game-high 20 points to lead Farrell to a 79-62 win over Redbank Valley in the opening round of the Dresch-McCluskey Tournament at Farrell.

Danny Odem added 13 points for the Steelers with Lamont Samuels chipping in 11 points.

Editor’s note: The score on the scoreboard indicated 79-62 but the score in the book for Farrell showed 81. As of Dec. 28, 2022, we are going with 81-62. The game may be available to be stated on video. If the score changes it will be indicated

ALLISON PARK, Pa. – Eric James scored eight of his 12 points during the overtime sessions to send North Hills to an 83-81 double-overtime victory over Grove City in the Hampton Tournament.

Included in James’ effort was a shot at the buzzer to send the game into double overtime, tied at 70-all.

DUBOIS, Pa. – In the opening round of the DuBois Holiday Tournament Brookville got 20 points from Clayton Cook on its way to a 50-42 win over DuBois in a game that doubled as a D9 League contest.

The game was knotted at 18 at halftime, but Brookville used a 15-5 third-quarter run punctuated by a Noah Peterson 3-pointer at the horn to take a 33-23 lead into the fourth quarter.

It was Peterson’s second triple of the third quarter, and he hit three in the game while finishing with 15 points.

Cam Thompson matched Cook for game-high honors scoring 20 for DuBois including 14 of the Beavers’ 18 first-half points.

DUBOIS, Pa. – In the opening game of the DuBois Holiday Tournament DuBois Central Catholic got 19 points from Andrew Green in a 62-38 win over Brockway.

Luke Swisher added 13 points for the Cardinals who also got nine points and 10 rebounds from Ben Gritzer and eight points from Brendan Paisley.

ERIE, Pa. – Union City went 15-of-19 from the free throw line in the fourth quarter on its way to a 66-52 win over Iroquois in the opening round of the Iroquois Tournament.

Crozier scored 12 of his points in the first half, while Demetris Crosby had 12 points for North East.

CORRY, Pa. – Markus Lambert and Rylan Smith combined for 46 points to lead Corry to a 76-47 win over Eisenhower in the Jim Gruca Corry Christmas Tournament.

Lambert scored 25 points, while Smith had 21 for the Beavers. Ryan Cressley was also in double figures for Corry with 10 points.

Kyler Black was the lone Eisenhower player in double figures with 15 points, while Kris Bunk had eight points and Wyatt Lookenhouse six.

AUSTINTOWN, OHIO – Jake Sambuchino had 14 points and pulled down 11 rebounds as Cathedral Prep earned a 37-17 win over Austintown Fitch (Ohio).

Moahamed Rahahma added eight points for Cathedral Prep, which improved to 7-0 with the win.

The Ramblers outscored Austintown 14-0 in the second quarter to take a 22-5 lead.

FARRELL, Pa. – Jonathan Anderson scored 21 points as New Castle beat Meadville 75-39 in the opening round of the Farrell Tournament.

Anderson was one of four New Castle players in double figures, as they built a 49-22 halftime advantage.

PATTON, Pa. – Cole Miller hit six 3-pointers on his way to a game-high 27 points in Clearfield’s 61-37 win over Williamsburg in the opening round of the Cambria Heights Tournament.

Miller added nine rebounds and three assists in the victory.

Also for the Bison, Andon Greslick scored 12 points, grabbed five rebounds, and handed out two assists while Braylen way also had 12 points to go with five rebounds and three helpers.

Chambers Nets 17 in Coudy Girls Win; Franklin Wins Battle in Venango Co.; Mercyhurst Prep Shines in the Sun Dec. 27
Saegertown’s Greco Scores 1,000th Career Point Tuesday at Mercer Tournament
This website or its third-party tools process personal data.In case of sale of your personal information, you may opt out by using the link Do not sell my personal information.
×
Manage consent