Wrapping it up: D9’s final week of regular season 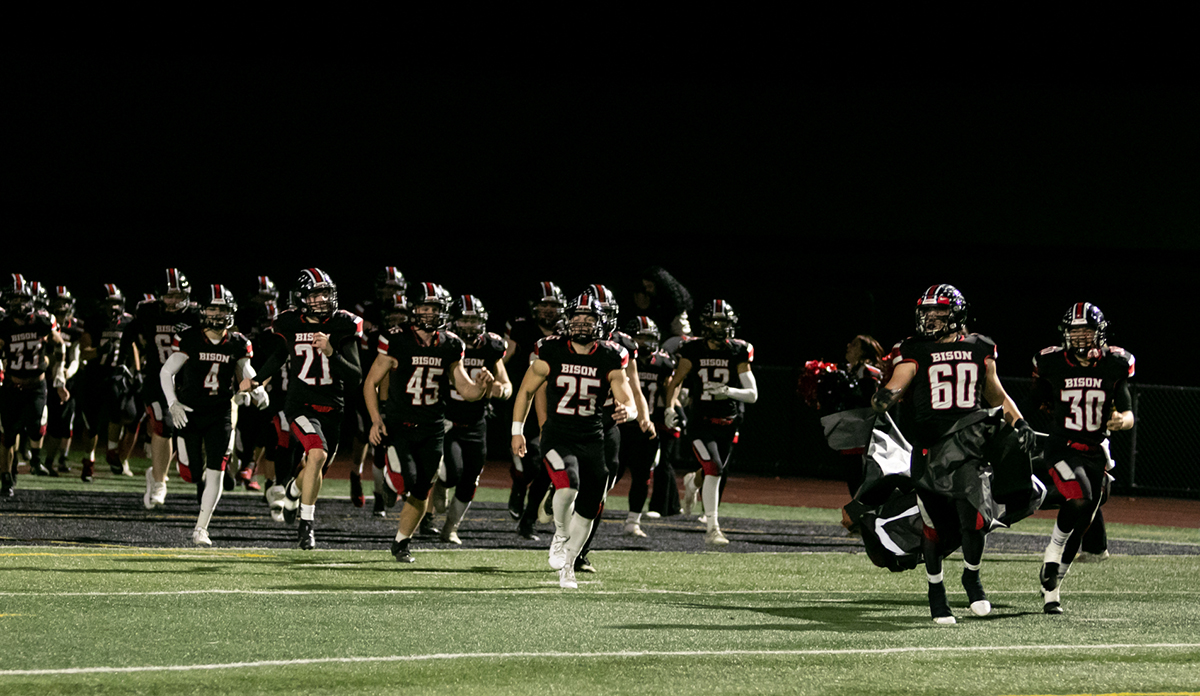 With the regular season winding to a close this Friday night, District 9 teams look to secure a berth in the playoffs or continue streaks that began early in the season.

Playoff chases are, in most cases, each team’s own policy. With open brackets pretty much in Class 1A and 2A, it’s really up to any of the teams with a realistic chance at finishing near .500 on whether they go to the playoffs.

— In Class 1A, all of the above minus Class 2A Kane could get in the postseason. That would make it an even eight-team field. It’s likely Redbank Valley (8-1), Smethport (7-2), Union/A-C Valley (6-2), Keystone (6-2) and Curwensville (5-3) already in with the Bulldogs clinching the top seed even before they visit Punxsutawney (2-6) Friday night.

Smethport is idle, which could drop the Hubbers to as low as the No. 4 seed with other teams chalking up more playoff standing points. Union/A-C Valley hosts Coudersport and a Falcon Knights win could knock out the Falcons and claim the No. 2 seed. Brockway hosts Brookville (6-3), probably needing a win to get a postseason nod. Cameron County visits Bucktail (0-8) and Port Allegany hosts Kane with the loser possibly deciding not to enter the playoffs.

In a seven-team bracket, just the top seed gets next week off. The top two seeds get a first-round bye if it’s a six-team bracket.

— It’ll be at least a four-team bracket in Class 2A with the likely top four seeds going Karns City (8-1), Ridgway (6-3), Brookville (6-3) and Central Clarion (4-4), which looks to be playoff-bound regardless of what it does against Clearfield. Brockway and Kane could make it a five- or six-team setup.

— It’s a two-team showdown for the D9 Class 3A title with St. Marys (8-1) and Clearfield. That game will be played next weekend at a site and time to be announced with the winner facing the District 5 champion — either Bedford or Somerset — Nov. 12 or 13 in a sub-regional final.

The Dutch travel south to District 6’s Tyrone (4-5) for their final regular-season matchup.

— In Class 4A, DuBois is likely headed to the postseason while Bradford’s season ended at 0-9. The Beavers are in a sub-regional with just one team with a winning record — Juniata at 6-2. That bracket must be completed by Nov. 12-13, so there may be a bye week coming for both teams.

Streaks anyone? Clearfield looks to win its 10th straight game and 12th regular-season game dating back to last year and complete a perfect regular season. Redbank Valley and St. Marys both lost their first games of the year and try to win their ninth straight games.

The Bison look to complete their fifth unbeaten regular season since 2010 as they host the Wildcats, who have evened their record with four straight wins after starting the year 0-4.

Kent State commit Oliver Billotte (1,272 yards passing, 16 TDs, 3 Ints; 395 yards rushing, 9 TDs) quarterbacks the offense while also ranking third on the defense from his lineman spot at 6.4 tackles per game with a team-high nine sacks. His top receiver is Karson Kline (41-809, 10 TDs) is coming off a Jim Kelly Player of the Week award performance with seven receptions for a school-record 235 yards and four TDs against Bellefonte. Mark McGonigal (101-808, 12 TDs) is the leading rusher.

Ryan Hummell leads the defense with 12.8 tackles per game and interceptions with three. Noah Naser (9.8) and Kaoz Baker (8.3) are other top tacklers.

The Rovers and Raiders were division rivals prior to last year in the Large School Division before the Rovers moved to the Small School South. This time around, the two play a non-divisional game that might determine what the Rovers do come playoff time. A win obviously gets the Rovers to .500.

Rovers offensive coordinator Frank Varischetti was previously with Brookville as late as 2018, so it’ll be a familiar look on the field with both teams running similar sets.

The Raiders’ defense has Hunter Smith (7.6), Carson Weaver (7.2), Jackson Zimmerman (6.8) and Bryce Weaver (5.1) leading in tackles per game. Smith has a team-high eight sacks while Kunselman has intercepted seven passes.

The Bulldogs have the No. 1 seed for the Class 1A playoffs locked up, but they don’t know if they’ll play a first-round game next week. The Chucks wrap up their season, coming off a 42-13 win over Moniteau last week.

It’s actually a Large School division matchup that was pushed to Week 10 to accommodate a couple of non-division dates for both the Gremlins and the Beavers. The Gremlins haven’t lost since their lone loss to St. Marys, routing Kane, Ridgway and Bradford. DuBois had won five straight since starting 0-4, but their winning streak was snapped in a 21-10 loss to Central Clarion last week.

This is actually the second meeting between the Red Raiders and Bucks. Cameron started the year 4-1 with a 22-20 win at Bucktail in Week 2, but it has lost three straight since then, including a 34-14 loss Port Allegany last week.

In the first matchup, the Bucks led 12-8 at halftime before the Red Raiders scored two straight touchdowns. Bucktail quarterback Dylan Cross threw for 121 yards and two TDs while rushing for 87 yards. His 26-yard TD pass to Brody Pentz cut the lead to two points in the fourth quarter.

It’s the Falcon Knights hosting the Falcons in Rimersburg, presuming that a win for Coudersport gets them in with a decision to enter the postseason. The Falcon Knights secure a No. 2 seed with a win, hoping to rebound from a 28-6 loss to Redbank Valley last week.

Coudersport quarterback Gavyn Ayers threw a 60-yard TD pass to James Culvey for the only score of the game in its 6-0 shutout over already-crowned North Division champion Smethport last week. Ayers has rushed for 502 yards on 100 carries with 11 TDs while passing for 319 yards, completing 21 of 63 with two TDs and nine interceptions. Dylan Kelly (100-426, 5 TDs) also gets carries while Culvey (10-270, 3 TDs) is the top receiver.

The Wolves have lost four straight going into their trip to Port, which has won two straight and likely needs to win again to get the nod for a playoff berth.

The Wolves got senior quarterback Harley Morris back last week as he threw for 204 yards and two TDs in a loss to St. Marys. For the season, he’s thrown for 943 yards and 9 TDs against 10 interceptions while rushing for 303 yards and two TDs in seven games. Ricky Zampogna filled in well at QB and sits at 497 yards passing to go along with a team-high 638 yards rushing on 118 carries with six TDs.

The Dutch head to Blair County to face a Tyrone squad that’s won two of its last three games, but is coming off a 44-21 loss to Hollidaysburg last week. The Golden Eagles have a forfeit win to their credit due to COVID-19 canceling their Sept. 24 game against Huntingdon.

Tyrone quarterbacks Ashton Walk and Keegan Gwinn have combined to pass for 1,458 yards and 14 touchdowns against seven interceptions. The Golden Eagles lost to the Dutch’s future finals foe Clearfield, 42-12, in Week 4.

Dutch senior quarterback Christian Coudriet and the rest of the offense looks to get tuned up for the Clearfield showdown. He’s nearing 2,500 yards in a season for the second time (181-for-273, 2,416 yards, 22 TDs, 3 Ints.) and with 6,604 career passing yards, he needs 35 yards to pass Smethport’s Mike DeFilippi (6,088, finished in 1999) for seventh on the district’s all-time passing list.

The Elkers held off Brookville last week in a 14-13 victory, meaning they’ll nail down a No. 2 seed behind Karns City with a win over the Mounties. That’ll also mean a potential semifinal matchup with the Raiders probably at home in a rematch in the playoffs.

The Golden Tide try to finish off a winning regular season after two straight one-win seasons when the host the Warriors of District 6.

The Warriors were blanked 21-0 by Glendale last week. The Tide beat Glendale, 32-29, back in Week 4. Sophomore quarterback Tyler Biggans runs much of the offense, passing for 700 yards and five TDs against 13 interceptions while leading the team in rushing with 472 yards and 10 TDs.

The Terrors travel to Westfield for what’s a usually annual late-season matchup with the District 4 Indians. Two years ago, the Indians outslugged the Terrors 56-54.