WPIAL Powerhouse Thomas Jefferson too Much for Banged Up Oil City 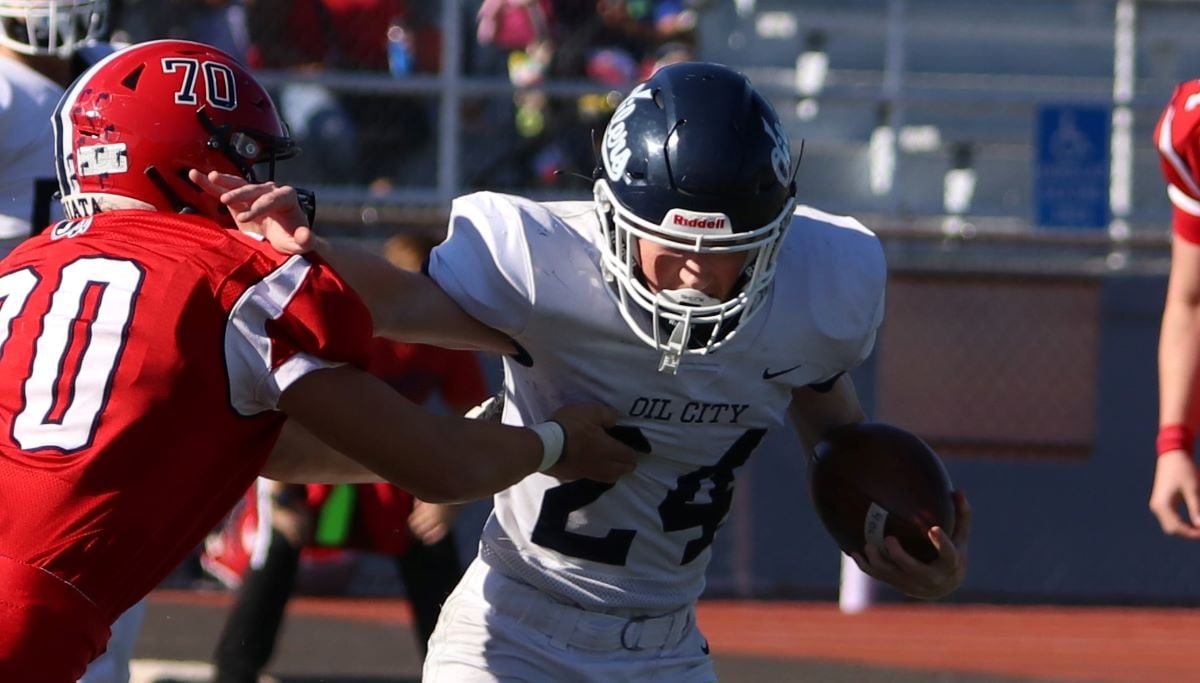 Sean Stack had a solid game in the loss for Oil City with an interception and 43 yards rushing. Photo by Jared Bakaysa of JB Graphics. See more of Bakaysa's work here

JEFFERSON HILLS, Pa. – Holden Stahl did about everything conceivable to play quarterback Friday night for Oil City in a PIAA Class 4A semifinal against Thomas Jefferson on the road.

Stahl tried a hot tub and ibuprofen to heal an ailing ankle.

There was no easy remedy for the Oilers during a 62-0 loss to the defending champion Jaguars.

Oil City’s offense, which averaged 50 points per contest entering the game, were blanked by a defense focused on shutting down an option attack with a gimpy quarterback.

“Last night, he couldn’t walk,” Oil City coach Dan York said. “He couldn’t walk right and it even showed when he threw the ball. You can’t throw the ball, and now we can’t run the option. There’s some stuff we wanted to do, we couldn’t do it.”

Thomas Jefferson (9-1) didn’t help by heaping pressure on Oil City from the outset.

The Jaguars marched down the field on their first possession, scoring 76 seconds into the game on a 21-yard pass from Jake Pugh to Preston Zandier.

It was the first of three touchdown passes for Pugh, which all went to Zandier.

Oil City’s offense got off to a positive start.

Sean Stack, who led the team with 43 yards on 16 carries, took the first carry of the game for 11 yards.

“Our thing was to not let them run the option,” Cherpak said. “We were coming to take the quarterback out of that equation. We did early and caused a fumble. We didn’t want to let them get going. If they can run the option and run the toss they run, it can cause problems for you.”

After Thomas Jefferson forced a fumble, Zandier doubled the lead by hauling in a 37-yard touchdown pass from Pugh.

The Jaguars added two more touchdowns – on a 40-yard run by Conner Murga and a 10-yard catch by Zandier – to stretch the lead to 28-0 by the end of the first quarter.

“What didn’t they do?” said York when asked what the Jaguars’ did right on offense. “It’s just one of those things.”

Murga, who rushed for a game-high 110 yards for Thomas Jefferson, scored two more times in the second quarter to extend the Jaguars’ halftime lead to 49-0.

Thomas Jefferson maintained its defensive intensity throughout the second half to make an emphatic return to Hershey.

York was pleased with his team’s effort throughout the season. Oil City made the semifinals by sweating out two one-point wins.

The banged-up Oilers just had a hard time against a tough Jaguars’ squad.

“That’s what I said to these guys, that’s too bad,” York said. “But I said there’s no doubt Thomas Jefferson is better than us. We ran into a hot team, that’s the way it is.”

Match Preview: Clarion/Marian Catholic Play for All the Marbles Saturday in PIAA 1A Volleyball
Third Quarter Dooms Reynolds In Class 1A Semifinal Loss to Jeannette
This website or its third-party tools process personal data.In case of sale of your personal information, you may opt out by using the link Do not sell my personal information.
×
Manage consent