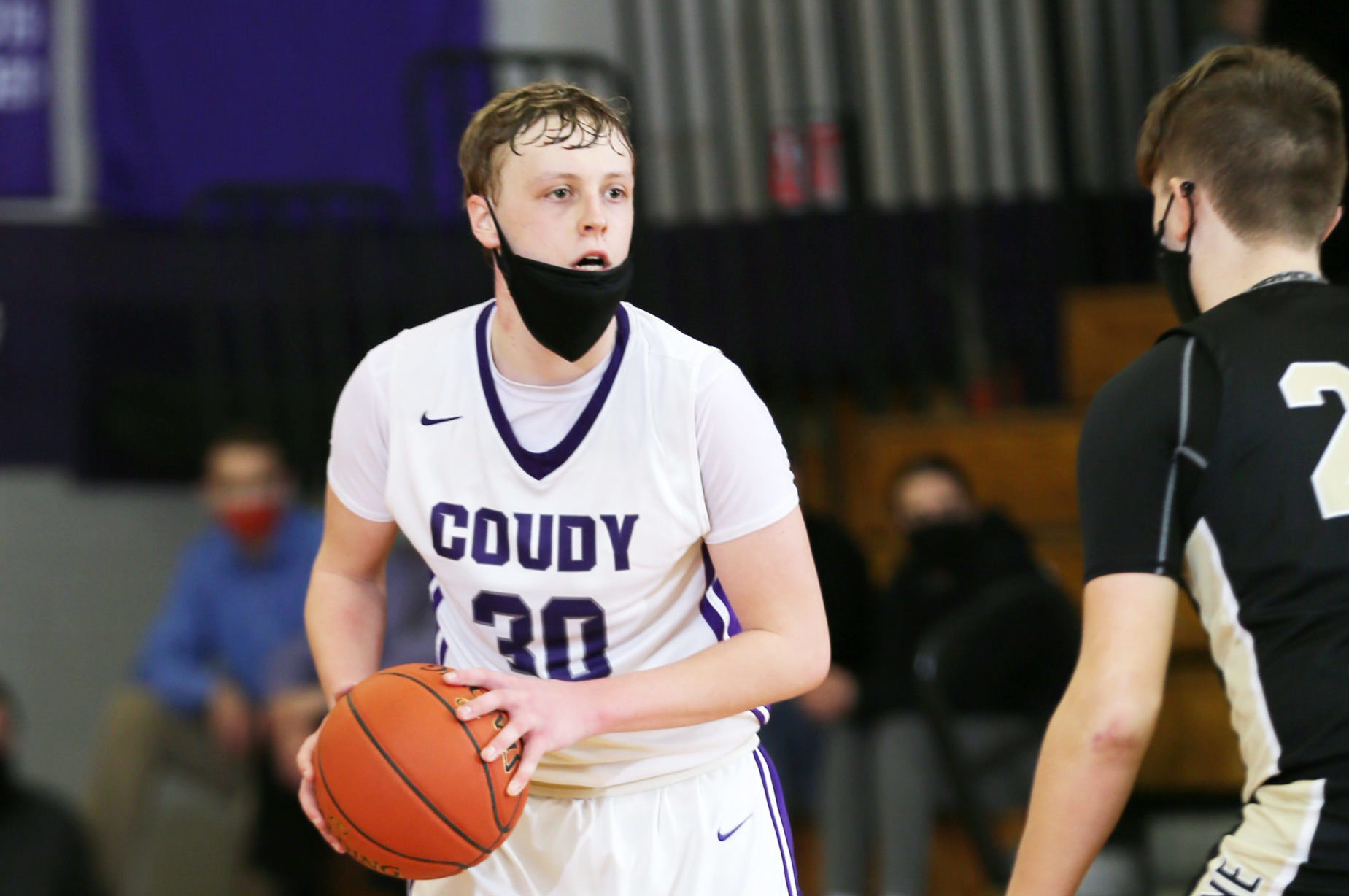 COUDERSPORT, Pa. – It was raining 3s in Coudersport on Thursday.

The host Falcons knocked down eight shots from distance in the first half, leading wire-to-wire in a 63-51 D9 Class 2A boys’ semifinal win over Keystone.

“For us to be successful against a 3-2 (zone), we felt like we really had to push the ball and look to attack and then look for kicks,” said Coudersport coach Scott Easton. “And it always helps when you’re knocking down 3s.”

Dalton Keglovits knocked down a pair to start the game and another from Garrett Kellert made it 9-0 right out of the gate.

Keglovits was brilliant for the No. 2 seed Falcons (14-5), especially in the first half, setting the tone with his outside shooting as well as a thunderous dunk to close the first quarter, one of two rack attacks he had on the evening.

“That’s huge,” Keglovits said. “I mean you watch the guys on the bench, the JV guys in the stands, and even the guys on the court, we’re pumped. That’s just huge for momentum. The team loves it.”

Keystone got within two, 14-12 early in the second quarter on a Brett Wingard bucket, but that was followed by an 18-4 Coudersport run that put them in complete control.

During the spurt, Derek Easton, Keglovits, Hayden Keck, and Brandt Kightlinger all hit from deep.

By the time the dust settled, Coudy led 32-16, and held that double-digit advantage for the rest of the game.

Keck spent much of the first half in foul trouble but was terrific in the second half in helping the Falcons maintain their lead.

He scored eight points in the third quarter and 14 of his 17 overall in the second half.

“I’ll tell you what, Hayden is a difference-maker, as well as a couple of our other guys,” coach Easton said. “He missed some time and we played really well and that helped. I mean, I think we had a lot of confidence because of the way we played the three games prior without Hayden.”

Keystone’s (15-5) Logan Sell did his best to keep the Panthers in the game, connecting on four 3s in the second half on his way to a game-high 20 points.

A Brett Wingard steal and layup to start the fourth quarter got the Panthers within 11, 50-39, the closest they got in the second half.

Coudersport responded with an 8-1 run, with a Keglovits putting an exclamation point on it, exploding down the lane and throwing down his second dunk.

Keglovits led Coudy with 19 points, while Keck added 17 and Easton 12.

Wingard added 13 and Colin Say eight for the Panthers.

Up next for the Falcons is a trip to play top-seed Karns City in the D9 title game on Saturday. The Gremlins eased past Ridgway in the other semifinal game, 59-34.

“We’re looking forward to it,” coach Easton said. “It’s two really good teams. If we want to win, we want to beat the best, and they’re the No. 1 seed. So you get a one vs. a two (seed) and you can’t ask for anything more.”