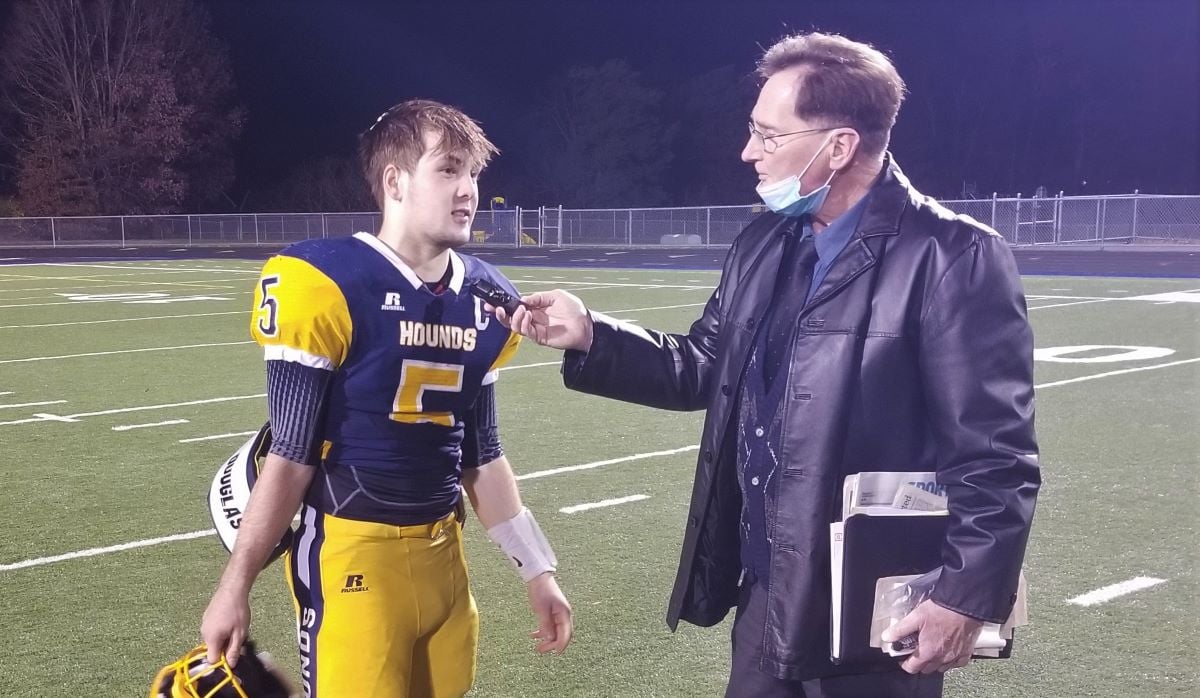 Caelan Bender of Wilmington is interviewed after the game by Ed Farrell of the Sharon Herald. Bender accounted for four of Wilmington's six touchdowns in Friday's win.

NEW WILMINGTON, Pa. – Caelan Bender accounted for four touchdowns for Wilmington Friday night in the Greyhounds 42-14 win over visiting Karns City in the opening round of the PIAA Class 2A playoffs Friday night, but all the senior quarterback really wanted to do was talk about his offensive line.

“They are special man,” Bender said when asked about the line. “Mr. Greenburg (longtime Mercer County radio announcer Bob Greenburg) put up a state that I think (said) we average like 6-2, 270 on the line. That is just incredible. They are great guys. They don’t care. They don’t need any credit. They just block and get the job done. No fuss about it.”

“We start things off up front,” Wilmington head coach Brandon Phillian said. “I think we’ve got a really solid offensive.”

Thanks, in part, to the offensive line, Bender put in a performance his coach described as “one for the ages”.

The senior quarter scored three times on the ground in the first half on runs of 1, 60, and 8 yards, and added a 36-yard touchdown pass to Ethan Susen in the fourth quarter – one of two big passes Bender and Susen hooked up on in the game.

Bender finished the night rushing six times for 88 yards while adding 110 yards passing on 3-for-7.

“We talk about what a dual-threat quarterback he is,” Phillian said. “I think that was fully on display tonight. I thought he had a great game running the football, a great game throwing the football. The thing about Caelan, he is also a tremendous leader. He’s really got the keys to this offense on the field. Multiple times tonight he checked us out of a play and checked us into a different play. We trust Caelan 100 percent running our offense out there. It was just a great night for him, and I couldn’t be happier for what he was able to do tonight.”

Bender was involved in perhaps two of the three biggest plays of the night.

The first was his 60-yard touchdown run that came midway through the second quarter with Wilmington (8-0) leading by just a touchdown, 7-0.

Karns City’s defense, after giving up a touchdown on the opening drive of the game for the Greyhounds, had forced back-to-back punts, and senior linebacker Nathan Waltman was making his presence felt all over the Wilmington backfield.

But Waltman had an issue with a cut and had to come out of the game for a play, and Wilmington took full advantage with Bender keeping the ball on an option and attacking the middle of the field where Waltman would normally be.

Bender, though, said he didn’t realize Karns City’s star defender wasn’t in the game, and the play was just the normal progression for Wilmington.

“Honestly, I don’t think so,” Bender said when asked if he realized Waltman had gone to the sideline. “We had that package in, and we were just going through that package. We were going through the plays we had in there, and I guess we just ran that one. Unfortunately, he wasn’t in there.”

The second big play didn’t lead directly to a touchdown but did set up Wilmington’s third score late in the first half that all but put the game away by putting the Greyhounds up 21-0 at halftime.

Following a Karns City punt, Wilmington was faced with 96 yards to go to the end zone.

Two plays, including a 15-yard run by Bender, got the Greyhounds some breathing room out at their own 21-yard line.

That’s when Bender, who hadn’t thrown a pass to that point – Wilmington ran 17 straight running plays to start the game – went up top and hit Ethan Susen with a 69-yard pass to the Karns City 10-yard line.

Bender finished the drive two plays later with his third scoring run of the night, the 8-yard blast up the middle with a tad over 51 seconds left before halftime.

“It was a great read by Caelan Bender,” Phillian said. “He was able to see the safety, where he was located, and get the ball up to Ethan. (He) made a great read getting the ball into Ethan’s hands, and Ethan with a couple of great moves to set up on the 10-yard line. To ultimately finish that drive with a score was huge going into the locker room.”

If the late first-half touchdown didn’t put the game away, what happened at the start of the third quarter did.

Karns City (6-3) kicked off to start the half, and Mason Reed fielded the ball at his own 27-yard line, made a couple of moves, broke into the free, and went 73 yards for a backbreaking touchdown.

“I thought all three phases made major contributions,” Phillian said. “To return a kickoff for a touchdown to get things started in the second half, what a boast of momentum that was.”

Things went from bad to worse for Karns City on the ensuing kickoff when the Gremlins fumbled the ball right back to Wilmington.

And while the Karns City defense held on downs inside the 10-yard line, the Gremlins offense went three-and-out setting up a short field for Wilmington.

The Greyhounds then put the PIAA Mercy Rule into motion when Darren Miller broke free for a 44-yard touchdown run and a 35-0 lead.

Karns City did manage a pair of 1-yard Luke Garing scoring runs sandwiched between the Bender to Susen touchdown connection to get onto the scoreboard.

Watch Garing score his first touchdown of the game late in the third quarter.

Wilmington will take on the winner of the District 5 championship game between Chestnut Ridge and Berlin Brothersvalley next week in the PIAA quarterfinals. The Chestnut Ridge/Berlin Brothersvalley game is Saturday, Nov. 7. The quarterfinal contest will be played at Wilmington again under the PIAA’s COVID-19 guidelines of the team on the top of the bracket hosting through the semifinals. The winner of the quarterfinal game will then travel to the WPIAL champion for the semifinal contest. The WPIAL title game is between Beaver Falls and Sto-Rox and is being played Nov. 14 at North Hills High School.

“Our coaches preach survive and advance,” Bender said. “That is really all we focus (on) – everybody going for the team and doing what is best for the team. I think that is what we did tonight. Offense, defense, special teams, it all clicked. We practiced that all week. We are just ready to move on and get the next game going.”

D9 and D10 Regular Season Recaps: Keystone, O-E, Warren, Corry All Win
Reynolds Wins District 10 Football Title for First Time Since 2005
This website or its third-party tools process personal data.In case of sale of your personal information, you may opt out by using the link Do not sell my personal information.
×
Manage consent