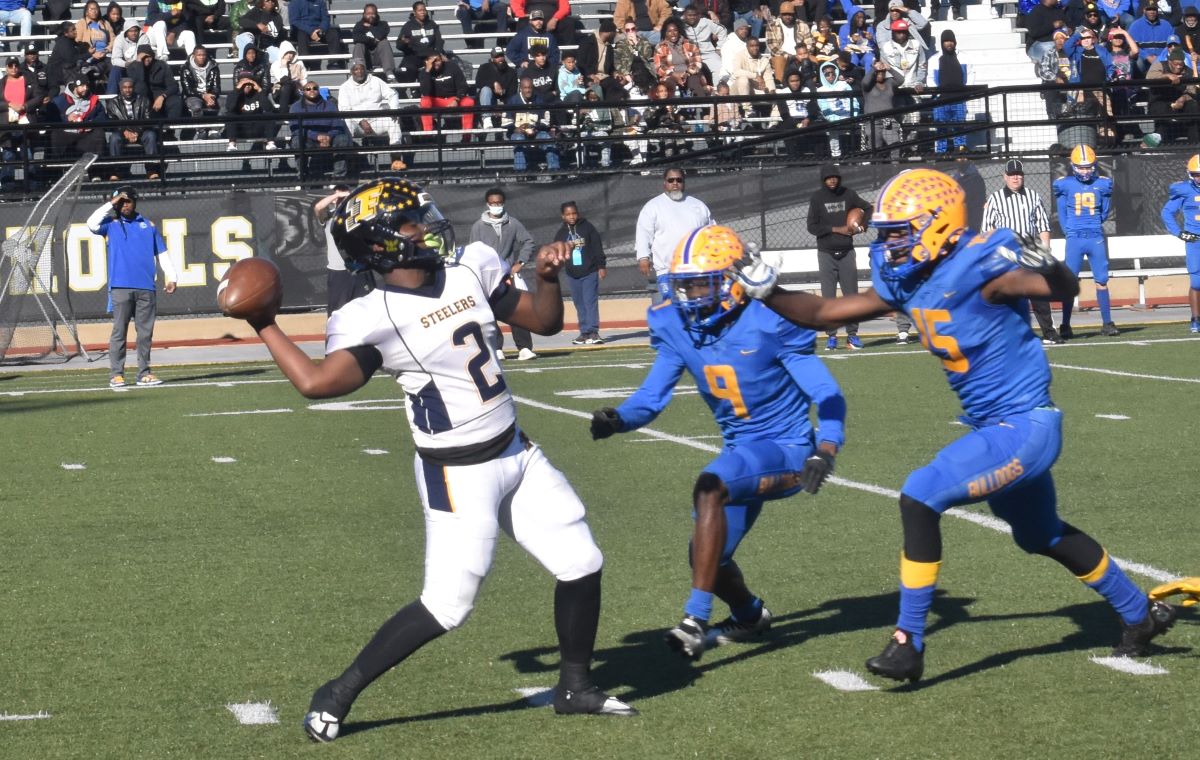 Farrell quarterback Kabron Smith is pressured during the first half against Westinghouse. Photo by Andy Close.

PITTSBURGH, Pa. – Westinghouse did what no team has been able to do against Farrell’s offense all season – shut them down.

The Bulldogs limited the Steelers to 61 yards of total offense, including negative three yards on the ground in a 34-6 win in the PIAA Class 2A quarterfinals at Cupples Stadium on Saturday.

With the win, Westinghouse advances to play WPIAL champion Steel Valley in the semifinals next week.

“We had our opportunities,” said Farrell coach Amp Pegues. “I think we were inside the 20 three or four times and we just didn’t get it done. It kind of reminded me in 2019 when we played Clairton and we were on the other end of the stick where they were down there a couple of times and turned the ball over.”

The Steelers (10-2) did indeed have their chances to start the second half. Trailing 20-6 at the half, they twice forced Westinghouse punts deep in their own territory, and the result was getting the ball at the Bulldogs’ (13-0) 29-yard line.

Each time, however, the Westinghouse defense was up to the challenge. The result was the best effort against a Farrell offense since the Steelers were shut out against Wilmington on Aug. 30, 2019.

The Westinghouse offense, conversely, got rolling again late in the third quarter, as Keyshawn Morsillo connected with Davon Jones on a 43-yard touchdown pass to cap an 87-yard drive.

“They are very well-coached and have great athletes,” Pegues said of Westinghouse. “They just played so hard. We had our opportunities, but just couldn’t get it done.”

Farrell was without a pair of key players in Kylon Wilson (1,500 rush/receiving yards, 27 TDs) and lineman Marcel Cheeks. Wilson was suspended for the game, a PIAA rule after he was ejected in the D10 title game against Sharpsville. Cheeks, an all-region lineman, was ruled ineligible for the postseason after transferring in the offseason.

“We were down a couple of key guys, but we’re not going to make any excuses,” Pegues said. “The better team won today and they’re moving on and just like I told the guys, we’re probably looking at the 2A state champions. I believe they’re that good.”

The two teams traded blows early in the game, with 20 combined first-quarter points.

First, it was Westinghouse getting great field position at the Farrell 45 on its opening drive. Khalil Taylor’s rush for 37 yards set up a goal-to-go situation and Taylor did the honors from one yard out to put the Bulldogs on the board.

Farrell answered right back. A 47-yard pass from Kabron Smith to Lamont Samuels Jr. put the Steelers in business, and Smith was able to punch it into the end zone on a 3-yard rush to make it 7-6 (the extra point was no good).

Westinghouse wasted little time in responding, going on a 63-yard drive that took just 1:36, as Taylor scored his second touchdown of the game on a 3-yard run.

After a Farrell punt, the Bulldogs went the length of the field to score for the third time in as many possessions, with Morsillo hitting Sincere Smith for a 16-yard score on a drive that took just 2:49.

“It wasn’t a great season, but it was a good season,” Pegues said. “The senior class, which was my first class as a head coach, won 48 games and a state title as freshmen. That’s pretty great.”

Morsillo finished with 164 yards passing and two touchdowns and 56 yards rushing, while Taylor had 106 yards on the ground and Smith 59 yards receiving.

For Farrell, Smith was 4-of-17 through the air for 64 yards, while Samuels finished with 62 yards receiving and Brandon Chambers eight yards rushing.

Pegues again praised his seniors for all they have accomplished and what’s in store for them.

“We’re losing about 15 of them, a lot of great players and a lot of leadership,” Pegues said. “I’m just so proud of them. A lot of them are going to go on and play some college ball, probably eight to 10 of them, which is really great for a small school like us.”

Gators Roll Reynolds, Head to PIAA Class 1A Semifinals
PIAA Announces Site/Time for Port Allegany’s PIAA 1A Football Semifinal Game
This website or its third-party tools process personal data.In case of sale of your personal information, you may opt out by using the link Do not sell my personal information.
×
Manage consent