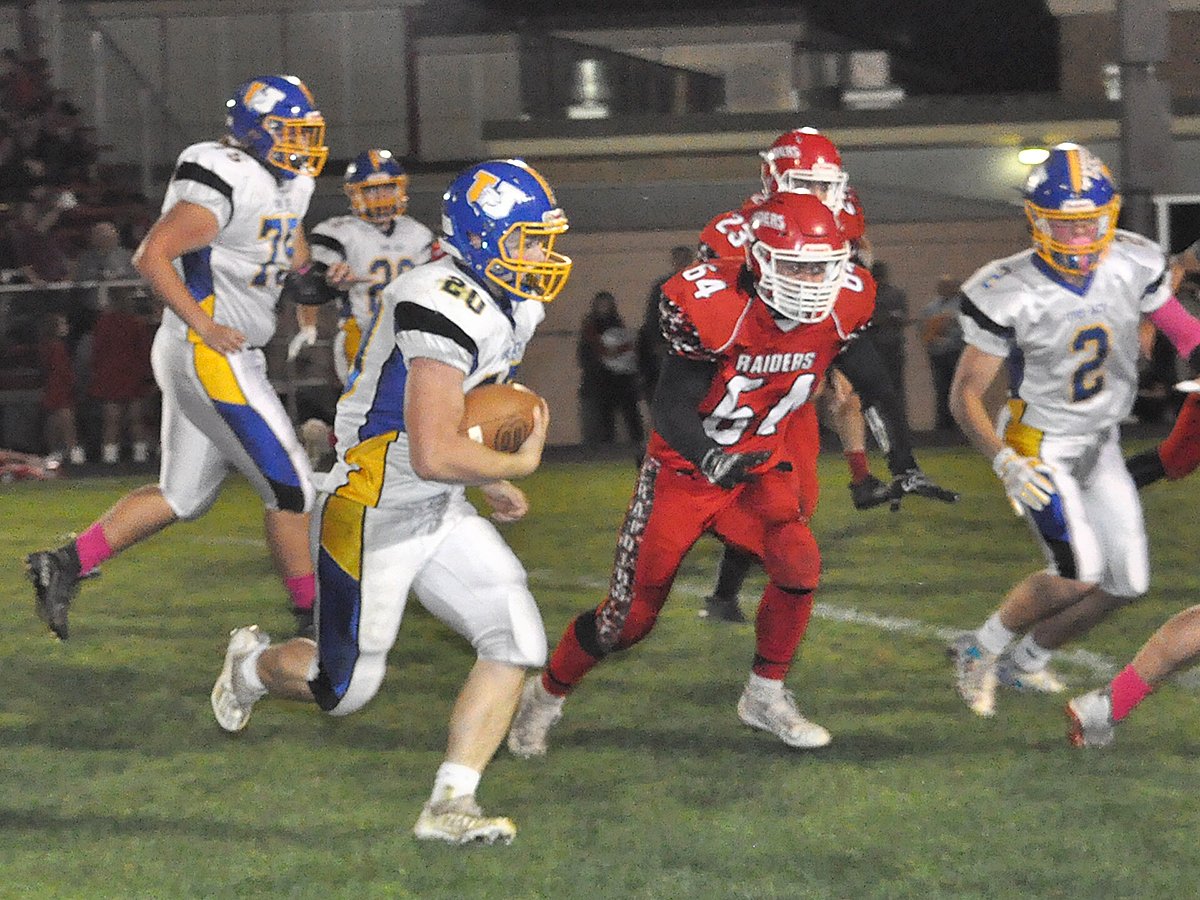 Two teams looking to bolster their positioning in the District 9 Class 1A playoffs collide Friday night at Union High school when the Union/A-C Valley Falcon Knights host the Redbank Valley.

The defending Class 1A champion Bulldogs (7-1) can also play a spoiler when it comes to the Small School South Division title race. A win over the Falcon Knights (6-1) would hand Keystone the division title presuming the Panthers beat Elk County Catholic.

A Union/ACV win claims the division title since the Falcon Knights beat Keystone two weeks ago. The only way the Bulldogs win the division comes with a win and an ECC upset win over Keystone.

All the scenarios were set into motion after both teams lost their season-opening games, Redbank Valley to Keystone and Union/ACV to Brockway. Neither team has lost since with the Bulldogs winning seven straight and the Falcon Knights six with one game — at Bucktail — lost due to COVID-19 concerns.

In the Mountain League, the district’s lone unbeaten Clearfield (8-0) hosts Bellefonte (2-6) and Curwensville (4-4) hosts Moshannon Valley (2-6) in the Inter-County Conference.

The Falcon Knights are giving up 9.4 points and 145 yards per game, intercepting 14 passes.

Eight different Bulldogs have combined for nine interceptions on a team that has eight non-offensive touchdowns — two fumble returns, four punt returns thanks to sophomore Ashton Kahle (32.8 per return on nine punts) and one kick return from Aiden Ortz, who has two interceptions.

Crissman (43-for-101, 553 yards, 9 TDs, 5 Ints.) leads the passing game with Roxbury (14-249, 2 TDs) and Caden Rainey (11-123, 2 TDs) his top receivers. Rainey averages a whopping 26.8 yards per return on 13 punts. Roxbury and Ryan Cooper are threats in the kick return game, combining to average over 30 yards per return with a Cooper touchdown. Rainey has returned two punts for TDs while Roxbury has two of the team’s four interception returns for scores.

After losing two straight games following a 5-0 start, the Panthers can win the Small School South with a win over the Crusaders and get help from Redbank Valley with a win over Union/A-C Valley. The Falcon Knights control their destiny, claiming the title with a win. A Panthers win and Union/ACV loss gives them the division while the only way the Bulldogs take the crown is to beat Union/ACV and hope the Panthers lose to the Crusaders.

Zach Mchenry (6.6 tpg.) leads the defense in tackles while he and Nellis give the Panthers a dangerous return game — Mchenry 23.3 and 23.0 averages on kick and punt returns with Nellis at 36.1 and 18.5 averages respectively. Nellis has returned two interceptions and one kick for a TD while Mchenry has one kick return for a score.

The Crusaders had scored 50 points in their previous six games before putting up 68 points in their shutout over Sheffield last week. Noah Cherry ran for 202 yards and Ben Reynolds for 155 yards.

The Rovers travel to Farwell, or the Renovo area, to take on the winless Bucks looking to keep their playoff hopes alive. They’re coming off a 26-21 loss to Port Allegany and with a non-division game with Brookville next week, taking care of the Bucks is a priority.

Bucks quarterback Dylan Cross leads the team in rushing as well. His top receivers are Braylon Fantaski and Brody Pentz. Last week, Zack Pick’s 80-yard kick return accounted for the only points for the Bucks in a 28-7 loss to Otto-Eldred.

The already-crowned division champion Hubbers look to wrap up their regular-season schedule at nine games with a matchup against their longtime rival Falcons, who will play a non-division game at Union/A-C Valley next week. So depending on how many teams get into the Class 1A playoffs, the Hubbers could be heading into a two-week break before playing a semifinal playoff game.

Coming off a big 26-6 win over Keystone last week, the Hubbers would secure at least a top-two seed with a win over the Falcons and perhaps the top seed if Redbank Valley loses to Union/ACV.

Last week, the Hubbers’ Ryan Mason ran for a touchdown, the team’s first without at least do-it-all senior quarterback Noah Lent being directly involved. He’s now rushed for 22 of the team’s 23 TDs while throwing for all 15 TD passes. For the season, Lent is up to 1,382 yards rushing on 152 carries with seven TDs while completing 44 of 80 passes for 751 yards and 15 TDs against just two interceptions. Alex Ognen (17-311, 9 TDs) and Brandon Higley (15-242, 3 TDs) are Lent’s top receivers.

Both teams are likely trying to secure a .500 record, so it’s an important game as the Red Raiders close with winless Bucktail next week and the Gators host Kane. The Red Raiders lost 20-6 last Thursday at home to Union/A-C Valley, which beat the Gators 41-8 in Week 5.

Port’s Noah Archer is coming off his Jim Kelly Player of the Week where he scored three touchdowns, including the game-winner in the fourth quarter to spark the team’s 26-21 win over Brockway. He ran for 109 yards while catching seven passes for 74 yards and had an interception on defense.

The Terrors ended their four-game losing streak last week with a 28-7 victory over winless Bucktail. They’ll end their regular-season schedule next week at Cowanesque Valley. The Bucks finish next week with Sheffield.

Ryan Love had a big game for the Terrors against Bucktail, rushing for 142 yards on 15 carries with three TDs. He’s the team’s top rusher with 448 yards and 7 TDs. Quarterback Gavin Jimerson ran for 81 yards last week. He went into the game with 521 yards passing and three TDs.

Sheffield has been outscored 424-32 in its seven losses, including a 68-0 loss to Elk County Catholic last week.

The last time these teams met, it was on the same field in last year’s Class 2A playoff semifinals where the Raiders won, 42-15. This time around, it’s pretty much about playoff positioning as the Raiders and Elkers right now are 2-3 respectively in the point standings.

The Elkers trio of Dom Allegretto (60-511, 9 TDs), Camron Marciniak (65-413, 4 TDs) and Eric Salberg (46-290) leading the running game that accounts for most of the team’s offense, but the passing game has been effective as Jonathan Hinton and Cameron Larkin have combined to throw for 1,082 yards and 10 TDs against six interceptions.

Last week’s convincing 35-0 win at Ridgway, the likely 2 or 3 seed, was impressive as they limited the Elkers to 198 yards in a shutout effort. Luke Garing ran for 106 yards on 16 carries and a TD while Jayce Anderson finished with 84 yards and two TDs. For the season, that duo leads the ground game with Anderson at 669 yards and 7 TDs and Garing with 620 yards and 15 TDs. Quarterback Eric Booher has passed for 763 yards with 8 TDs and three interceptions.

The Owls dropped a 38-7 loss to Central Clarion last week. While the defense has struggled significantly stopping foes, they’re passing the ball as much as any time in program history as the QB duo of senior Elijah Fitton (1,375) and freshman Talan Reese (651) have combined for over 2,000 yards in the air. Their top receiving target is Dalton Dixon (47-861, 7 TDs), who is approaching a 1,000-yard season.

It’s a battle of one-win teams as the Chucks host the Warriors. Not surprisingly, both teams beat Bradford, Punxsutawney 49-21 two weeks ago and Moniteau 44-38 in Week 5.

The Chucks were blanked 35-0 last week by DuBois. Junior running back Zeke Bennett (158-695, 6 TDs) is the workhorse for the Chucks’ offense. Quarterback Noah Weaver has thrown for 244 yards while rushing for 303 yards and 4 TDs.

The Dutch clinch the Large School Division title with a win over the Wolves before playing Tyrone next week to finish out the regular season. A loss to the Wolves and a Karns City win over DuBois next week would give the Gremlins the crown. Any tiebreaker if they both finish with a loss goes of course to the Dutch, who beat the Gremlins.

The Dutch have won seven straight since an opening loss to Ridgway, including a 42-6 rout of Moniteau last week. Quarterback Christian Coudriet (164-for-249, 2,146 yards, 20 TDs, 3 Ints.) became the ninth D9 quarterback to go over 6,000 career passing yards and he passed Clearfield’s Chad Kroell (6,088) into eighth place on the honor roll. With 6,334 yards, he’s 304 shy of tying Smethport’s Mike DeFilippi for the No. 7 spot.

The Wolves put up some decent offensive numbers last week against the Raiders in a 42-15 loss with Ricky Zampogna passing for 260 yards and rushing for 51 yards without an injured Harley Morris in the lineup. Zampogna has passed for 495 yards and Morris 739 yards this year  while Zampogna is the leading rusher with 536 yards on 104 carries. Landon Darr (36-409, 5 TDs) had 12 catches for 169 yards against Brookville.

It’s four straight shutout wins for the Bison, who haven’t given up a point since a 42-12 win over Tyrone in Week 4 and one of those wins came against the Red Raiders, whom the Bison beat 48-0 in Week 5. The rematch, a rare in-season rematch due largely to not being able to find another foe, will be at the Bison Sports Complex this time around.

But the defense numbers are impressive. The Bison, thanks to the shutout run, have given up just 26 points or four touchdowns all season. Opposing teams have rushed for 192 yards for the season … on 194 attempts while completing 78 of 183 passes for 652 yards and nine interceptions.

The Golden Tide have lost three of the last four games, including a 45-17 loss last week at Southern Huntingdon. Also included in that stretch is a “forfeit” loss to Bellwood-Antis due to the game being canceled due to COVID-19 concerns with the Tide. That’s the opposite way of how D9 has handled its canceled games to date, so the playoff point standings are reflecting two different standards of what’s a loss and win.

Down the Stretch They Come: D10 Football Embarks on Week 9
D9and10Sports.com to Broadcast Bradford at Karns City Football Friday
This website or its third-party tools process personal data.In case of sale of your personal information, you may opt out by using the link Do not sell my personal information.
×
Manage consent