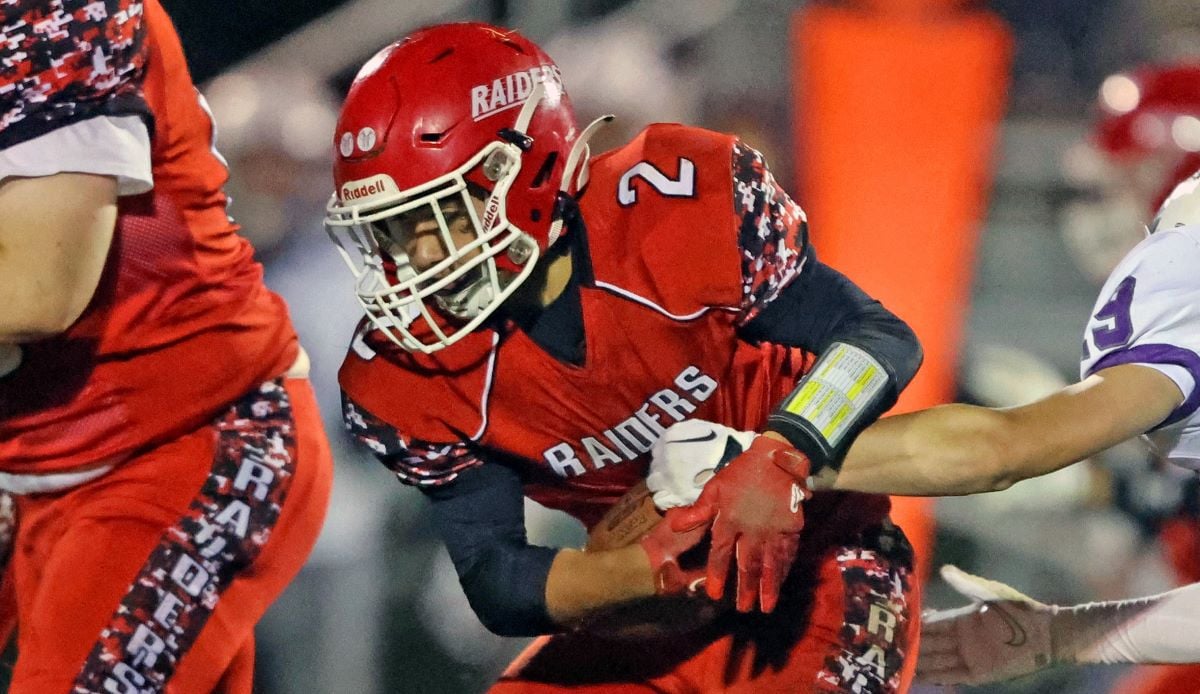 It was the fourth straight win for the Red Raiders (4-5) after an 0-5 start and it snapped Otto-Eldred’s three-game win streak with the Terros falling to 6-3.

Otto-Eldred, which lost quarterback Andrew Schenfield to an injury in the third quarter, trailed 22-14 until midway through the fourth quarter when David Schonfield ran for a 4-yard touchdown and Hunter App took in the 2-point conversion run to tie the game at 14.

Baughman’s overtime touchdown was his third rushing TD of the game, as he added a pair of 1-yard runs. He ran 13 times for 80 yards and was 0-for-4 passing.

Freshman Malaki Zucal continued his strong season for Cameron County going over 200 yards on the ground with a touchdown. He rushed 24 times for 209 yards giving his 543 yards rushing on the year with all but 45 of those yards coming in the last four weeks. It was his third 100-yard rushing performance of the year.

Landen Farren had eight tackles and a sack for Cameron County, while Isaac Shaw had seven tackles for Otto-Eldred.

Watch an interview with three of the Cameron County heroes, including Narby

RIDGWAY, Pa. – In a game delayed in the first half because of lights going out on the bleacher side of the field in the first quarter, Union/A-C Valley rallied from an early deficit to beat Ridgway, 26-19.

Trailing 6-0 at the end of the first quarter, the Falcon Knights (5-4) scored three straight touchdowns, including a 40-yard interception return for a TD by Ryan Cooper to start the scoring for Union/A-C Valley.

Zach Cooper added a 1-yard touchdown run just before the half to put the Falcon Knights ahead 14-6 at the break, and then Brody Dittman ended a 19-play, 96-yard with a 6-yard touchdown run to make it 20-6 with 58 seconds left in the third quarter.

But just as Union/A-C Valley looked like it was putting the game away, Luke Zimmerman broke a 70-yard touchdown run, his second long run of the game (he also ran for a 61-yard score in the first quarter), to make it 20-13.

Dittman and the Falcon Knights answered right back with a 66-yard drive that ended in a 21-yard Dittman run 2:12 into the fourth quarter to make it 26-13.

Ridgway (2-7) got a late touchdown with 2:25 to play on a 3-yard Aiden Zimmerman run but couldn’t get closer.

Dittman was 10 of 16 passing for 103 yards and an interception while rushing eight times for 50 yards and two touchdowns.

Mikey Card then the Falcon Knights with 17 carries for 82 yards.

NEW BETHLEHEM, Pa. – Braylon Wagner threw for all of his 221 yards in the first half, throwing for two touchdowns and running for another to lead Redbank Valley to a 34-28 win over Brockway.

Wagner completed 17 of 24 passes overall — he went 16-for-20 in the first half — and helped engineer four Bulldogs scoring drives in four first-half possessions. He threw a 6-yard flip pass to Aiden Ortz, ran for a 1-yard TD and threw a 22-yard scoring pass to Tate Minich before Drew Byers scored on a 2-yard run to put the Bulldogs up 28-14 with 2:52 left in the second quarter.

From there, the only points the Bulldogs scored was an Ortz 47-yard interception return on a Brayden Fox pass that hiked the lead to 34-14 with 1:11 remaining in the third quarter.

Brockway matched Redbank Valley’s first two scores for a 14-14 tie with Fox’s TD strikes to Dylan Hanna covering 13 and 74 yards. But the Rovers didn’t score again until the fourth quarter when Hanna grabbed his third TD pass from Fox on an 8-yarder and another Fox TD covering 5 yards to Alex Carlson with 1:07 remaining.

Brockway’s ensuing onside kick try failed and the Bulldogs were able to kneel out the clock.

The Rovers’ Jendy Cuello ran for 178 yards on 32 carries. Hanna caught four passes for 119 yards. Fox was 17-for-38 for 229 yards with his four TDs and two interceptions.

SMETHPORT, Pa. – Trailing by 12 midway through the second quarter, Kane scored four unanswered touchdowns on its way to a 26-12 road win over Smethport.

Kyle Zook threw for a pair of scores and Sam West and Addison Plants each ran for touchdowns to lead the Wolves (2-7) to the victory.

A 17-yard Zook to Landon Darr touchdown pass on a fourth-and-9 play got Kane moving, and when Plants scored on a 3-yard run the Wolves took a 14-12 lead into halftime.

Zook then hooked up with Sam Lundeen on a 45-yard scoring pass to push the lead to 20-12, and West scored on a 5-yard run to make it a two-score game.

Will Domico’s 36-yard interception return for a touchdown in the second quarter gave the Bison a 7-6 halftime lead, and Collins then added touchdown runs in the third and fourth quarters to put the game away.

Xavier Curry added an interception on defense for Clearfield (7-2).

ST. MARYS, Pa. – Central Clarion’s defense intercepted Charlie Coudriet four times returning one of them to the house to lift the visiting and unbeaten Wildcats to a 48-27 win at Dutch Country Stadium.

St. Marys (6-3) led 13-7 midway through the second quarter but watched Central Clarion (9-0) score 21 points in the final 3:50 of the half including two touchdowns in 12 seconds by Tommy Smith in the final minute of the half.

Connor Kopnitsky, who scored three times on the ground, gave the Wildcats the lead for good, 14-13, on a 26-yard run with 3:50 to play before the break.

Then, with 52 seconds left in the half, Smith caught a 16-yard touchdown pass from Jase Ferguson to make it 21-13.

On St. Marys’ next play, Smith intercepted Coudriet and returned it 22 yards for a touchdown and a 28-13 Wildcat lead at the break.

Central Clarion extended the lead to 34-13 going to the fourth quarter thanks to a 51-yard Ferguson to Ashton Rex touchdown pass.

The teams then traded fourth-quarter scores with Ferguson finding Rex again, this time from 62 yards out, and Kopnitsky scoring on a 1-yard run for Central Clarion and Coudriet hitting Collin Reitz with a 17-yard scoring pass and Carter Chadsey with a 7-yard pass.

Both QBs had mixed outings.

Coudriet tossed four touchdown pass to go with his four interceptions and was 16 of 36 for 228 yards while rushing seven times for 22 yards.

Kopnitsky ran 12 times for 57 yards and the three touchdowns with Rex catching six passes for 153 yards and the two scores while also rushing twice for 16 yards.

Smith, who had two interceptions on defense, added three catches for 38 yards and the touchdown.

Ferguson and Braylon Beckwith also had interceptions for the Wildcats.

Coudriet, Chadsey, and Eli Rippey each had interceptions for St. Marys while Johnny Brandy had a pair of sacks.

WEST SUNBURY, Pa. – Visiting DuBois got touchdowns from five different players in a 42-0 rout of Moniteau.

The Beavers (5-4) led 21-0 at halftime on touchdown runs from Garrett Nissel, Dalton Yale and Brendan Orr, then doubled the total with three more scores in the second half. Trey Wingard threw a TD pass to Cam-Ron Hays, Hayden Ross ran one in and Orr added a second TD run to complete the scoring.

The Gremlins (5-4) ran for 292 yards and five touchdowns on 51 carries while quarterback Eric Booher was 9 of 12 passing for 153 yards and a touchdown.

Nathan Hess scored on a pair of short runs for Karns City finding the end zone from a yard out and from two yards out, and the Gremlins scored 28 straight points after Bradford tied the game at seven. Hess also caught a 33-yard screen pass from Booher for a touchdown.

Mason Martin, Braden Slater, and Cooper Coyle also scored on the ground for the Gremlins with Martin scoring on a 5-yard run, Slater on a 2-yard run, and Coyle on a 1-yard run.

Levi Hawk led Karns City with 13 carries for 93 yards with Nate Garing adding four carries for 39 yards and four catches for 32 yards. Micah Rupp had a pair of catches for 46 yards.

Coyle added one catch for 43 yards and five carries for 23 yards.

His touchdown was a 6-yard pass to Adam Ward, and Lucas Luktah also scored on a 1-yard run for the Owls.

Ott scored on runs of 30 and 28 yards for the Falcons (6-3) who also got rushing touchdowns from James Culvey, Viggo Brown, and Cooper Rossman, a 14-yard John Wright to Jackson Moss touchdown pass, and a block punt recovery score from James Liller.

In all, 14 different guys carry the ball.

Brody Pentz threw a touchdown pass for Bucktail but was also intercepted three times, all by Dylan Howard.

Pentz went 4 of 14 for 47 yards with his scoring pass going to Gavin Yachymiak.

A pair of kickoff returns for scores and an interception return for a touchdown helped the Trojans (6-3) pull out the victory.

Two of those non-offensive touchdowns happened late in the first half and helped Mt. Union turn a 20-15 deficit into a 30-20 halftime lead.

Following a 29-yard Danny McGarry to Nik Fegert touchdown pass that put the Tide (3-6) up by five, Je’Saun Robinson returned the ensuing kickoff 80 yards to give the Trojans the lead for good, 23-20.

Right after the Robinson kickoff return, Cainen Atherton scored his second of three touchdowns when he picked off a McGarry pass and went 52 yards to the house and the 30-20 lead.

Robinson then scored on a 24-yard run out of halftime to push the Trojan advantage to 36-20.

But as it has done all season, Curwensville fought back.

A 9-yard McGarry to Fegert scoring pass, one of three between the duo, made it 36-26, and then McGarry hit Fegert from 15 yards out before running in the 2-point conversion to close the gap to two, 36-34, with 10 ½ minutes to play.

But Curwensville’s special teams let the Tide down again when Atherton returned the ensuing kickoff 80 yards for a touchdown and a two-score lead, 43-34.

McGarry added a pair of rushing touchdowns for Curwensville scoring on runs of 18 and five yards in the first half.

Atherton had a 31-yard scoring run for Mt. Union before halftime, and Bryce Durish added a 68-yard touchdown run to give the Trojans a 15-14 lead.