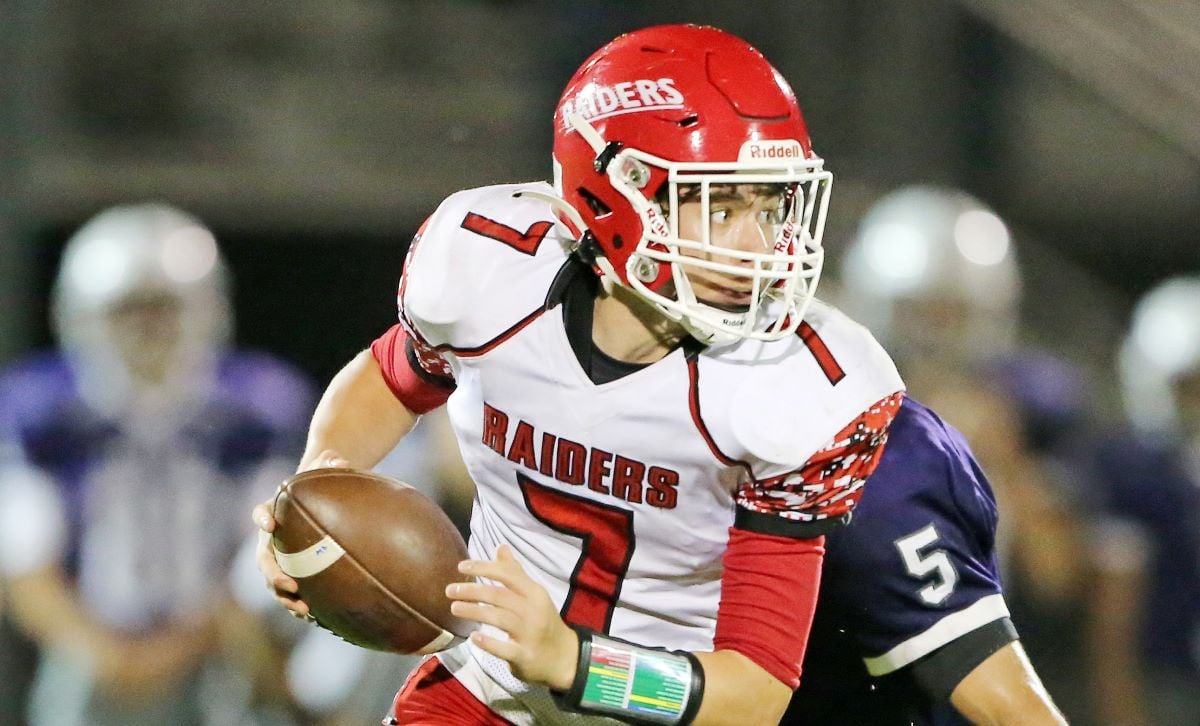 The Red Raiders (3-5) trailed 13-8 at the break but a Maddox Baughman touchdown run and a Baughman touchdown pass in the second half to take a 22-13 halftime lead before Jameson Britton put the game away with a 2-yard run with 7:17 to play.

Baughman’s 2-yard run just under four minutes into the second half gave Cameron County a 16-13 lead, and he then hit Brevin Lewis with a 28-yard scoring pass 49 seconds into the fourth quarter to make it 22-13.

Baughman also scored on a 1-yard touchdown run in the second quarter to give the Red Raiders a 8-0 lead before Noah Cherry helped put ECC (6-2) ahead at halftime.

Baughman passes for 39 yards (3 of 5) while rushing nine times for five yards.

Britton led the Red Raiders, who gained just 166 yards, with 59 yards on 17 carries with Malaki Zucal adding 56 yards on 14 totes.

RIDGWAY, Pa. – Scoring four touchdowns in a span of 8:01 starting late in the third quarter and continuing midway through the fourth quarter, Brockway broke open a 13-all tie on its way to a 41-13 win at Ridgway.

Alex Carlson scored a pair of those touchdowns including a go-ahead 16-yard touchdown pass from Brayden Fox with 1:52 to play in the third quarter before returning an interception 83 yards for a score with 8:46 to play in the game to make it 34-13.

A 62-yard Fox to Dylan Hanna touchdown pass on the final play of the third quarter had put the Rovers (5-3) up two scores going to the fourth quarter.

Ridgway (2-6) led 7-6 at the end of the first quarter thanks to a 62-yard Cameron Larkin to Aiden Zimmerman touchdown pass early in the game.

Carlson then caught a 22-yard touchdown pass from Fox midway through the second quarter to put the Rovers up 13-7 before Eli Perez caught a 13-yard scoring pass from Larkin with just 13 seconds to go before halftime to tie the game at 13 at the break.

Fox was 12 of 14 passing for 147 yards and three touchdowns with Carlson catching four passes for 52 yards, Hannah catching two balls for 60 yards, and Brubaker six for 35 yards.

Cuello ran 26 times for 160 yards and the touchdown with Hanna adding nine carries for 41 yards. Brubaker ran twice for 14 yards and the score.

Larkin was 7 of 20 for 141 yards, two touchdowns, and an interception. Zimmerman had three catches for 79 yards.

Ridgway, though, was held to 32 yards on the ground on 24 carries while Brockway rushed for 233 yards.

KNOX, Pa. – Aidan Sell and Kyle Nellis both ran for over 100 yards and two touchdowns to lead Keystone to a 45-13 win over visiting Kane.

Tyler Albright also caught a touchdown pass for the Panthers and had three catches for 52 yards while rushing five times for 47 yards.

Drew Keth was 3 of 6 passing for 52 yards and a touchdown and also returned an interception for a touchdown, and Josh Beal kicked a 35-yard field goal.

RIMERSBURG, Pa. – Brody Dittman threw for a touchdown and ran for two touchdowns and Ryan Cooper scored three times to lift Union/A-C Valley to a 42-7 win over visiting Smethport.

Dittman threw a 37-yard touchdown to Zac Cooper and ran for scores of 21 and 1 yard, while Ryan Cooper scored once on an interception return (42 yards), once on a pass from Owen Bish (60 yards), and once on a punt return (25 yards).

Smethport’s lone touchdown, which came with the Hubbers (1-7) down 42-0, was on a 25-yard pass from Preston Alfieri to Aiden McKean.

Dittman was 2 of 5 passing for 63 yards and the score and ran four times for 47 yards.

Dawson Camper ran 13 times for 55 yards to lead the Falcon Knights, while Mikey Card had 39 yards on five carries.

BRADFORD, Pa. – Charlie Coudriet scored two rushing touchdowns and threw for a third to lift visiting St. Marys to a 31-0 win over Bradford.

Matthew Davis (84-yard carry) and Justin Dornish (4-yard run) both scored on the ground for the Dutch as well.

Carter Freeland, Carter Chamberlain, and Brady Collins each scored twice for the Bison (6-2).

Both Freeland’s and Chamberlain’s scores came on the ground, while Collins ran for a touchdown and caught a touchdown pass.

Bellefonte fell to 1-7 on the year.

PUNXSUTAWNEY, Pa. – No Zeke Bennett, no problem for the Punxsutawney rushing attack.

Despite missing its workhorse running back, the Chucks ran for 310 yards on its way to a 41-0 win over visiting Moniteau.

Seth Moore also ran for a short score for the Chucks (4-4) while throwing for 47 yards and two touchdowns. Noah Weaver and Beau Thomas caught touchdown passes.

On defense, Landon Peterson had six tackles and a sack for Punxsy with Anthony Gould had five tackles and two sacks.

Matt Martino had 33 yards receiving and 12 yards rushing for Moniteau (2-6).

KARNS CITY, Pa. – Jackson Zimmerman ran for three touchdowns while quarterback Noah Peterson threw for over 100 yards and ran for over 100 to lead Brookville to a 34-9 win at Karns City.

Peterson and Carson Weaver scored on runs in the fourth quarter to help the Raiders pull away for the win.

Ferguson ran for TDs of 1 and 2 yards. He also threw an 11-yard TD pass to Mason Burford. Connor Kopnitsky ran for 53 yards on 10 carries with a TD. Thomas Uckert also kicked a 23-yard touchdown.

Wingard was 2 of 8 passing for 67 yards with Kougher catching three passes for 69 yards.

CURWENSVILLE, Pa. – Adam Jasper hit Noah Hendershot with a 2-point conversion pass in overtime to give visiting Conemaugh Valley a 28-27 win over Curwensville.

Curwensville (3-5), which missed an extra point at the end of regulation that would have won the game, got the ball to start overtime and went ahead 27-20 on a 10-yard Danny McGarry to Chase Irwin and a Nik Fegert extra point.

But the Blue Jays (2-5) answered back on a 5-yard Jasper run to get Conemaugh Valley within one, and the Blue Jays went for and got the victory with the 2-point play.

Curwensville, which trailed 20-7 early in the third quarter, could have won the game on the final play of regulation.

After McGarry hit Hunter Tkacik from 19 yards out on the final offensive play of regulation to tie the game at 20.

But Fegert’s extra point was low after a bad snap sending the game to overtime.

Jasper ran for 52 yards on eight carries, while Elio Darr led the Blue Jays with 136 yards and a touchdown on 32 carries. Tommy Stiffler added a 58-yard touchdown run and ran seven times for 73 yards.

Irwin had eight carries for 83 yards.

RENOVO, Pa. – Otto-Eldred scored the final 16 points of the game in the fourth quarter to rally for a wild 42-36 win over Bucktail.

Braxton Caldwell’s 86-yard interception return for a touchdown coupled with the 2-point conversion got the Terrors within two at 36-34 with 6:07 to play.

Three minutes later, Andrew Schenfield connected with Max Splain with 3:07 to play to put the Terrors up for good.

Schenfield had another big game through the air, throwing for 281 yards and three touchdowns. Max Splain had 110 yards receiving, while Manning Splain had 131 yards and Ray’Shene Thomas also hauled in a score.

The Terrors overcame a monster game from Bucktail’s Tanner Pettingill, who rushed for 207 yards and four touchdowns on runs of 5, 16, 22, and 3 yards.

Week 8 D10 FB Recaps: Grove City Powers Past Sharpsville; Big Second Half Lifts Prep; OC’s Knox Over 400 Again in Win
Battle to the Gators: Port Allegany Tops Redbank Valley
This website or its third-party tools process personal data.In case of sale of your personal information, you may opt out by using the link Do not sell my personal information.
×
Manage consent