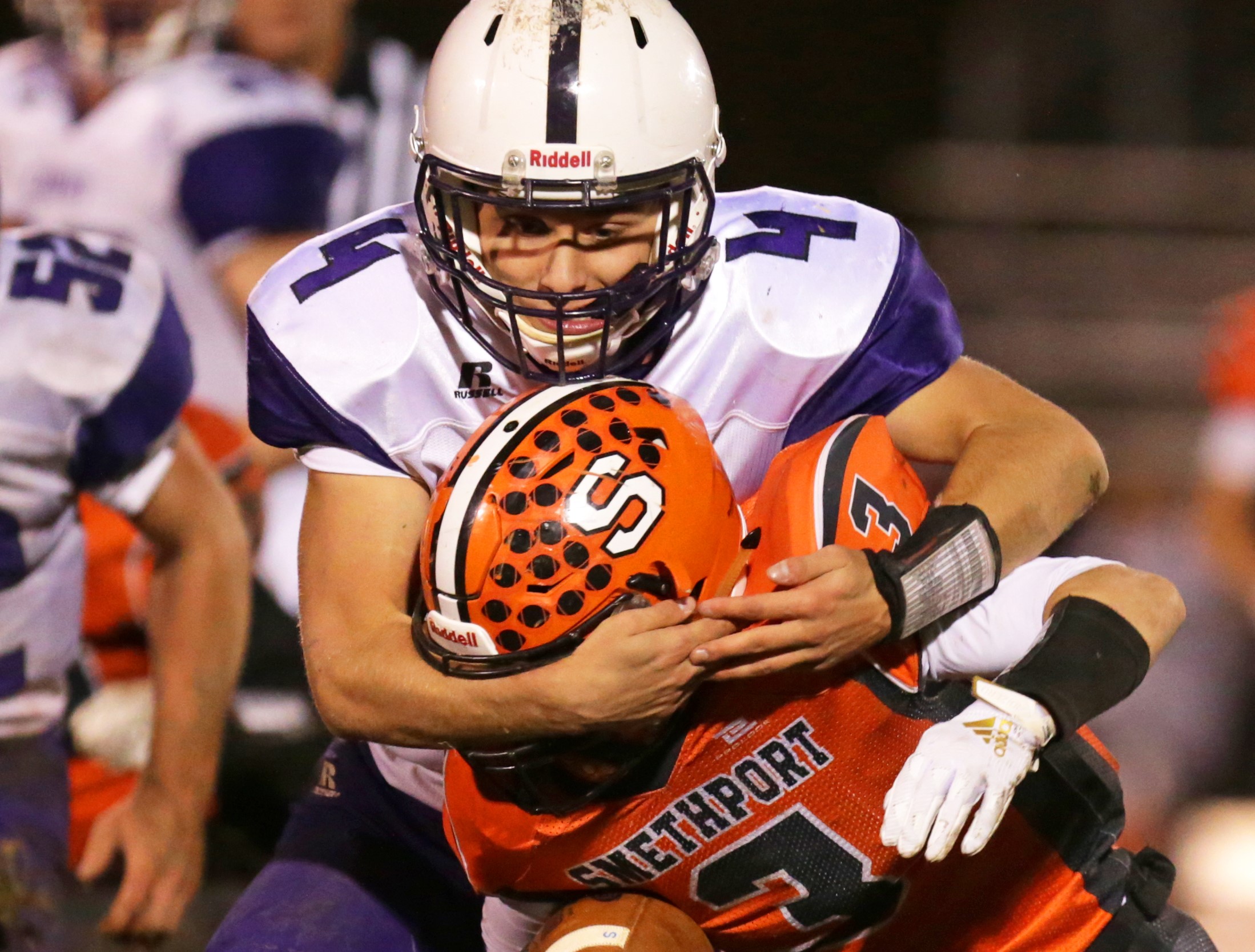 Hayden Keck of Coudersport and Braedon Johnston of Smethport will tangle again Friday night in Coudersport with a home playoff game on the line. (Photo by Paul Burdick. Check out more of Burdick's work here)

The football playoffs begin in less than two weeks.

That’s a victory considering the clouds of doubt hanging over things earlier this fall.

District 9 ironed out some details at a Wednesday meeting. The football portion of those details can be read here.

And now on to Week 6 of the season. The big game? With a playoff theme clearly the biggest factor, it’s Smethport at Coudersport Friday night with a 7 p.m. kickoff.

Both teams are 4-0 in the IU9 Small School Bubble and both teams are secured a playoff berth in Class 1A. Friday’s winner gets Union/A-C Valley presumably at home either Oct. 23 or 24 while the loser heads to Redbank Valley on one of the same dates in the other semifinal matchup.

Home fields are intended to be used for the semifinals with Brockway serving as the neutral site for the finals in both Class 1A and 2A the weekend of Oct. 30-31 as the above story indicates.

It’s the fifth time that the Hubbers and Falcons have met since the beginning of the 2018 season. The teams split that year with Coudersport winning the playoff matchup. Last year, the Falcons swept the Hubbers, 42-0 and then 35-6 in the semifinals.

Both teams haven’t been tested much this year, the Falcons outscoring their foes 187-40 and the Hubbers 194-12.

Similar to the Falcons, the Hubbers have a playmaker at quarterback as well. Noah Lent (58-592, 11 TDs) leads the team in rushing while completing 21 of 41 passes for 416 yards with 10 TDs and one interception. Braedon Johnson (66-442, 5 TDs) is Lent’s top handoff option out of the backfield while Ryli Burrit (8-191, 5 TDs) is Lent’s top receiving target.

So obviously, the Moniteau at Karns City and St. Marys at Ridgway games have playoff implications.

UPDATED PASSING HONOR ROLL — Four active D9 passers are on the this updated all-time passing yardage/TDs list as Brookville’s Jack Krug broke a tie with Brockway’s Derek Buganza for second place on the TD passing list while climbing closer to No. 4 Gabe French of DuBois on the yardage list.

A missing honor roll player was added to the list. Clarion’s John Katis threw for 4,082 yards, 2014 his senior year with the Bobcats.

Here’s a closer look at the rest of this week’s games:

The last time these Butler County rivals met in Moniteau in the season-opener, it was the visiting Gremlins that won 31-8. The Gremlins have split their four games since with Moniteau owning just one win against winless Punxsutawney and dropped a last-second 19-16 decision at DuBois last week.

In the first meeting, the Gremlins outgained the Warriors 292-206 with quarterbacks Eric Booher and Brayden Christie throwing TD passes to Micah Rupp. Kaden Scherer returned a punt for a touchdown.

The Gremlins have split their four games since then, routing DuBois and Punxsutawney and losing to Brookville and Central Clarion, the latter a 43-41 classic that came down to the last play of the game.

It’s a shorter season, obviously, but the Raiders haven’t had a perfect regular season since maybe 1933 when, at 7-0, the Raiders appeared to pick up a late-November game to play … DuBois. And the Beavers dominated the Raiders in a 47-12 rout.

The Raiders haven’t been 7-0 since 1971 and they’ll try to do that in a rematch with a Beavers team they topped 42-28 at home in the season-opener. The Beavers were routed in Week 2 by Karns City (55-14), but have played well since then, blanking Punxsutawney and losing a close 15-7 decision to Central Clarion before last week’s 19-16 last-second win over Moniteau.

The Raiders beat the Chucks 49-14 last week after a 47-14 win at Moniteau two weeks ago. They’re averaging 46.2 points and 436 yards per game offensively. Quarterback Jack Krug, who passed for 383 yards and four TDs in the first matchup, has thrown for 1,493 yards and 22 TDs and is one shy of reaching 100 for his career. Only Port Allegany’s Matt Bodamer (137) has more.

The first time around, the Wildcats beat the Chucks 42-6 at the C-L Sports Complex and racked up 458 yards of offense while Cal German passed for 292 yards and four TDs.

The Chucks have scored five TDs in their five games, two of them coming in last week’s loss to Brookville. The Chucks average 190 yards per game offensively, with Kameron Falgout (56-248, 2 TDs) and Zeke Bennett (87-238) getting most of the yards out of the backfield rushing. Falgout ran 84 yards for a TD in the first game against the Wildcats.

The Flying Dutchmen beat the Elkers 34-7 two weeks ago, so they’ll look to make it a season sweep as they try to keep up the momentum for a Class 3A D9 title showdown with Clearfield.

Christian Coudriet threw for 202 yards and three touchdowns while James Davis ran for 175 yards on 25 carries and two TDs in the Dutch’s win over the Elkers. They also limited Ridgway to just 122 yards of offense, including 18 yards rushing on 16 attempts.

The Wolves routed the Owls 51-7 two weeks ago at home, but the Owls turned around their rematch against Ridgway last week, losing just 28-21 after falling to the Elkers 45-14 the first time around.

The Owls threw the ball 54 times in their first three games, but quarterback Austen Davis completed 14 of 40 in the loss to Ridgway. For the year, Davis has completed 28 of 69 for 297 yards with two TDs and one interception. The Owls still haven’t been able to run the ball, just 188 yards in four games with no back over 75 yards.

In their season-opening matchup, the Bulldogs beat the Golden Tide 44-0 and limited the Tide to 61 yards yards of offense. While the Bulldogs were securing a playoff spot with a 26-0 win at Keystone last week, the Tide lost a tight 19-14 decision to Brockway.

Redbank Valley has given up just 14 points all season while averaging 264 yards per game. The Bulldogs used two quarterbacks in last week’s win. Cam Wagner, who replaced starter Gunner Mangiantini in the second half and completed 3 of 5 passes for 37 yards and two touchdowns. He’s 7-for-15 for 82 yards and two TDs backing up Mangiantini, who has thrown for 365 yards, completing 30 of 56 passes with six TDs and two interceptions.

The first meeting in Brockway in the season opener saw the Falcon Knights win 37-7 as they held the Rovers to 70 yards with Eli Penny returning an interception for a touchdown and quarterback Tanner Merwin ran for two TDs and threw another to Karter Vogle.

After starting 0-3, the Rovers have won three straight games including last week’s 19-14 win over Curwensville.

Quarterback Conner Ford has completed 45 of 77 passes for 561 yards while running for 190 yards on 63 attempts. Conner Ryckman has rushed for 161 yards on 31 attempts while Austin Schmader (14-208) and Tanner Morelli (12-237) are the leading receivers. Morelli scored the Rovers’ lone TD in their first game against the Falcon Knights with a kick return.

Both teams have lost to unbeaten Smethport and Coudersport and both teams beat Port Allegany — the Crusaders 60-28 last week and the Terrors 40-30 in Week 2 — so it could be a very interesting matchup in St. Marys.

Something will have to give here in a battle of winless teams. The Gators and Red Raiders have been outscored by a combined 332-76, although all but six of those points have been scored by the Gators.

Port lost a 40-30 shootout to Otto-Eldred and was close at halftime to Elk County Catholic last week before dropping a 60-28 loss. The Red Raiders haven’t scored since their 32-6 loss to ECC in the opener, losing shutouts to unbeaten Coudersport and Smethport since then.

The Red Raiders were held to just 20 yards of offense against the Hubbers last week. Dylan Rieder led the defense with eight tackles.

The Bison host the winless Bearcats as they look to rebound from last week’s 25-21 loss to Central-Martinsburg, which beat Huntingdon 53-17 two weeks ago.

Looking for a team to replace Sheffield on their schedule, the Panthers head to the Johnstown area to face the Blue Jays, a Class 1A school in District 6.

Keystone looks to move on from its 26-0 loss to Redbank Valley last week, knocking it out of the playoff race. Running back Nick Weaver (65-385, 7 TDs) is also the top receiver with eight catches for 132 yards and two TDs. His nine TDs lead the team and he’s accounted for seven of the team’s 12 TDs since the Panthers’ 86-point opener against now-defunct Sheffield.