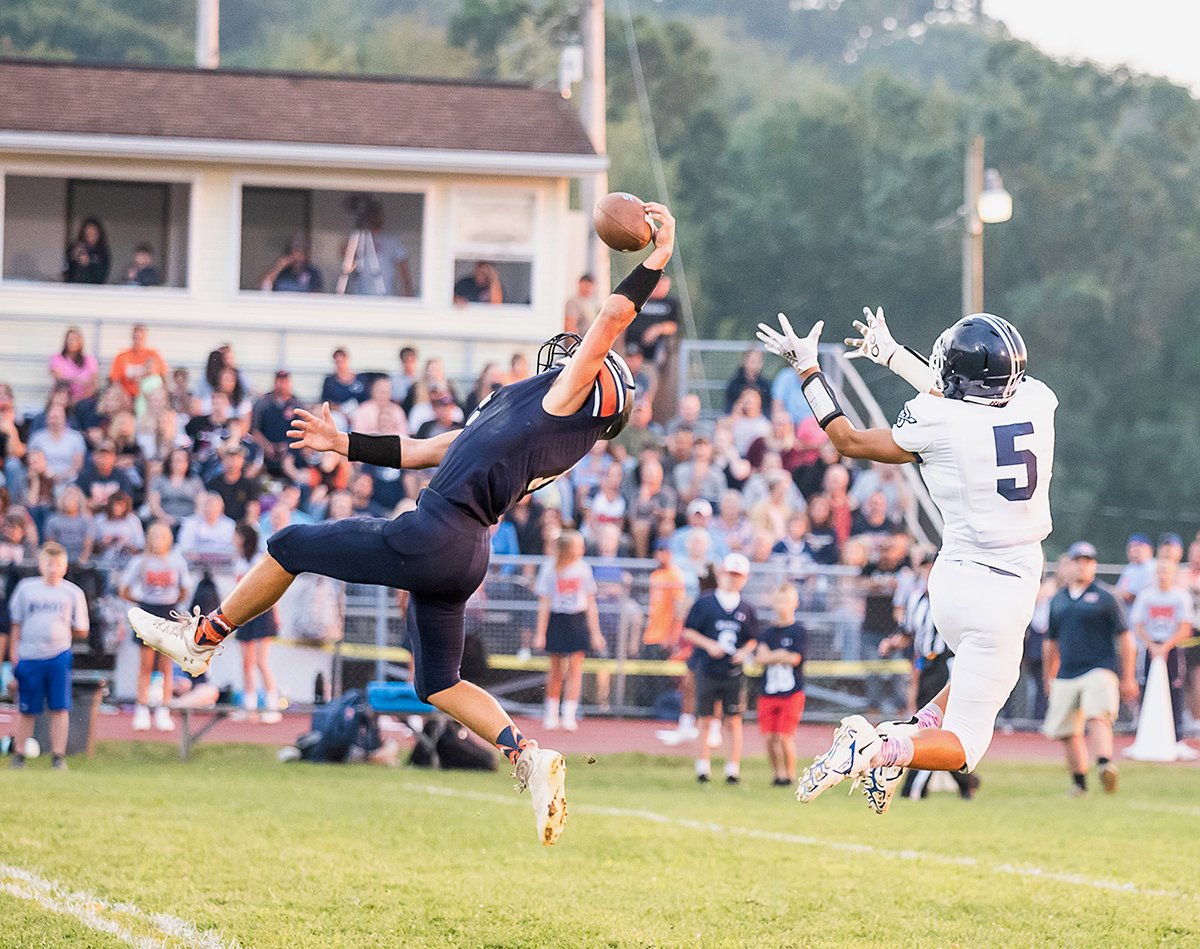 Two matchups featuring one of the three District 9 unbeaten football teams against a 3-2 foe catch our eye this week as the season enters Week 6. The district has 13 games that all fall on Friday night.

The 5-0 Redbank Valley Bulldogs host Union/A-C Valley in New Bethlehem while the Central Clarion Wildcats put their perfect record on the line against Karns City at Clarion University’s Memorial Stadium.

Both game have Region 1 or 2 implications as far as the standings go, but also district playoff rankings as well. The Bulldogs and Falcon Knights are among a group of Class 1A teams looking to solidify their status while the winner of the Gremlins/Wildcats game likely gets the top seed for the Class 2A playoffs.

In Region 1 play, the Wildcats and DuBois are the lone unbeaten teams with Karns City and St. Marys both sitting with one loss.

From a Class 1A playoff perspective, the Bulldogs’ home date with the Falcon Knights — it’s their first matchup since last year’s D9 final won 28-21 by the Bulldogs in a close game at Clarion University on their way to the state final — plays a big part in sizing up the field. Right now, it’s either the Bulldogs or Port Allegany as the top seed if the playoffs began today.

And once again, of course, record or power points do not determine seeding. A committee does it on a judgment call. It’s important to remember that as D9 is doing that for the first time this season in Classes 1A and 2A.

How the Falcon Knights sit in the picture makes it an important game for them as they’ve won two straight since back-to-back blowout losses to Keystone and Central Clarion. The Panthers, at this point, would probably be the No. 3 seed on merit.

Last week, the Falcon Knights beat the Wolves, 37-19, while the Bulldogs rallied from a 13-0 first-quarter deficit to outgun Ridgway on the road, 42-33.

Redbank Valley puts up 38 points with 384 yards of offense per game. Quarterback Cam Wagner and his receiving crew accounted for 22 of the team’s 27 touchdowns. He’s completed 71 of 100 passes for 1,353 yards with three interceptions.

Union/ACV averages 245 yards per game of offense. The Falcon Knights rushed for a season-high 268 yards last week and had a balanced 324 yards against Brockway with a season-high 172 passing yards.

The Bulldogs have won seven of eight meetings against the Falcon Knights since the co-operative program went into effect prior to the 2016 season.

At Clarion University’s Memorial Stadium, the 3-2 Gremlins head into their matchup with the unbeaten Wildcats with a three-game winning streak. They opened with losses to DuBois and Redbank Valley and with the improving health of injured quarterback Eric Booher, they’re probably where they wanted to be out of the gate at this point.

These are the only two teams with winning records in Class 2A with Brookville, Kane and Moniteau at 1-4 and Ridgway at 0-5. So while those teams try to put together a resume worthy of a postseason trip, the Wildcats and Gremlins battle for the top seed, which may not mean much other that posturing if nobody else gets into the playoffs that can include up to four teams.

Last year, the Gremlins swept the Wildcats, 35-7, in the District 9 Class 2A playoffs while beating the Wildcats 37-13 during the regular season.

Karns City, after its losses, beat Ridgway (28-0), St. Marys (14-6) and Moniteau (35-6). The Wildcats haven’t played any of those teams yet, a quirky setup considering these teams play in the same division.

Booher completed 6 of 8 passes for 87 yards and three TDs in last week’s win over Moniteau, the first passes he’d thrown since the opening loss against DuBois when he was already playing with an injury that eventually forced a cast on his right arm. He played after that, but didn’t start at quarterback, or throw any passes since the opener.

Meanwhile, the Wildcats are forcing turnovers and scoring points, averaging 38.6 points and 394 yards of offense per game with 26 takeaways so far.

This is the fifth game between the teams over the past three seasons. They split their 2020 games, 43-41 Wildcats in the regular season and 34-9 Gremlins in the playoffs.

Here’s a look at the other games:

The Beavers face the Chucks looking to keep pace with the leaders at the top of the Region 1 standings while the Chucks try to end a three-game losing streak. DuBois has won 12 of the last 15 meetings with their long-time rival, including 35-0 last year.

Beavers quarterback Cam-Ron Hays has thrown for 340 yards and leads the team with his 252 rushing yards. Chucks running back Zeke Bennett has churned out 721 yards and 10 TDs on 127 carries, or over 25 attempts per game.

The Chucks’ three losses are to Redbank Valley, Central Clarion and St. Marys, which have a combined one loss. DuBois has not played any of those teams yet.

The Raiders’ all-time winningest coach faces them on the sideline as head coach of the Dutch as Chris Dworek faces his old team for the third time with the first two games being split. The Dutch beat the Raiders at home, 19-14, last year.

Raiders quarterback Easton Belfiore has thrown for 537 yards (35-for-66) with six TDs and four interceptions. Jackson Zimmerman (75-369) is the leading rusher while Brayden Kunselman (17-253, 2 TDs) and Noah Peterson (13-171, 3 TDs) are the leading receivers. Kunselman became the fourth Raider to reach 100 career receptions in last week’s loss to DuBois.

The Owls lug a 23-game losing streak to Butler County to face the Warriors, who are 7-25 since 2019 with three of those wins coming against the Owls. Last year, the teams battled to a 44-38 slugfest won by the Warriors who ran for 575 yards with Matt Martino and Hunter Stalker running for 287 and 175 yards respectively. Both are back.

The Gators head to Kane with three straight wins, coming off an impressive 40-7 rout of Brockway last Saturday.

After managing just 12 points in their first three losses to Port Allegany, St. Marys and Karns City, the Elkers have turned up their offense at least and last week’s performance left unbeaten Redbank Valley with its hands full in a hard-fought 42-33 win over the Elkers in Johnsonburg.

The Rovers try to stop a two-game losing streak at home against the Hubbers, who are coming off a 14-14 loss to Keystone. Two weeks ago, they dropped a 16-0 shutout loss to Coudersport. The Rovers beat the Falcons, 70-16, in Week 3.

Rovers quarterback Brayden Fox has thrown for 1,271 yards and 12 TDs and one interception while Alex Carlson (50-587, 6 TDs) is his top receiving target.

The Crusaders look to keep their unbeaten season alive with a home date against the Falcons. They’ve given up five TDs in the past five games, improving on their first shootout win over Otto-Eldred (35-30) in the season-opener with a 49-6 blowout of the Terrors last week.

In last week’s win, Noah Cherry ran for five TDs and 129 yards on 21 carries. Complete statistics for the Crusaders are not available on Max Preps.

Coudersport comes of a 16-0 shutout win over Smethport and doesn’t yet share a common foe with the Crusaders. Quarterback Gavin Ayers has thrown for 199 yards and two TDs while rushing for 129 yards and five TDs. Ethan Ott (47-209, 1 TD) is the top rusher.

The Red Raiders head to Clinton County to face the Bucks, who are coming off their second win of the season over winless Sheffield with a 42-22 decision.

The Bucks lost 30-16 to Elk County Catholic and 52-32 to Otto-Eldred while Cameron has scored five TDs all season and has been shut out in two straight losses to Port Allegany and Coudersport, 22-0, last week. The Red Raiders and Bucks don’t share a common foe yet.

Cameron quarterback Maddox Baughman has thrown for 471 yards and one touchdown.

This won’t count in the region standings because it’s the second meeting between the Wolverines and Terrors, who won the first matchup 54-6 at Sheffield in Week 2.

Sheffield, with 15 straight losses, put up a season-high point total in last week’s 42-22 loss to Bucktail in its second meeting with the Bucks. The Wolverines’ statistics aren’t available on Max Preps.

The Golden Tide face a West Branch team that lost a 62-52 shootout to Conemaugh Township last week in which the teams combined for over 900 yards of offense. Both teams have wins over winless Everett, West Branch 48-28 and Curwensville 33-13 last week.

The Bison have won four straight since opening with a loss to Juniata and visit the Bearcats who have lost three straight, including last week’s 14-6 loss to Tyrone. They lost 41-14 to Penns Valley in Week 3. The Bison beat the Rams, 42-14, last week.

Brady Collins has rushed for 449 yards on 58 carries with five TDs to lead Clearfield, which has beaten Huntingdon four straight times and nine of 10 since 2009.