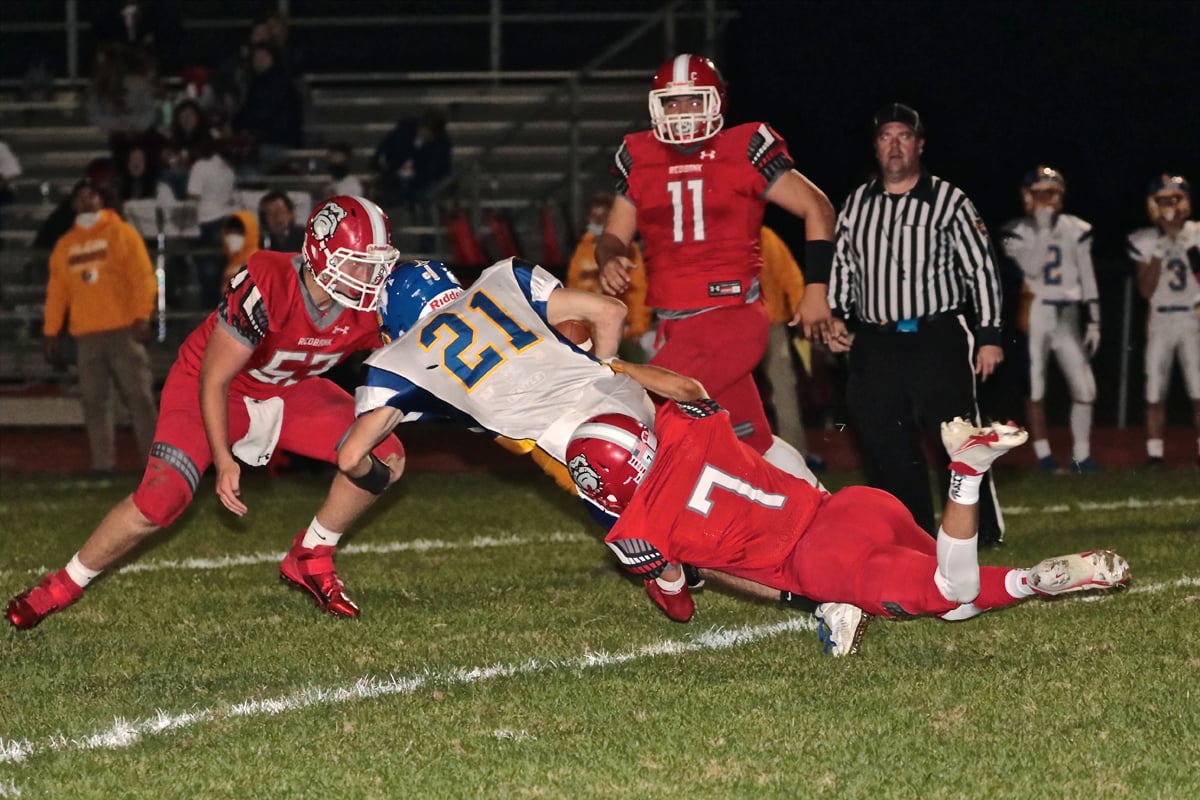 Redbank Valley's Trenten Rupp (7) and Coltin Bartley (53) stop Union/ACV's Kylar Culbertson (21) while Kobe Bonanno (11) looks on. The Bulldogs square off against Keystone this Friday in a key Class 1A game in Knox. (Photo by Mike Maslar)

When glancing down the District 9 playoff scenarios, there’s just one that has any type of drama.

In Class 3A, there are three D9 teams and one is winless. The other two are Clearfield (2-0) and St. Marys (3-0). Those two will play for the D9 title Oct. 23 or 24 with the winner playing the D5 champion the next weekend for a state berth.

In Class 2A, the only possible scenario that’s interesting in the IU9 Bubble is if Ridgway gets tripped up two games in a row against Bradford and St. Marys. Since it doesn’t play Kane again and it’s between those two teams for the one playoff berth, one loss to those two teams and the Elkers still go to the postseason since it beat the Wolves in the season opener.

But in Class 1A, half of the equation is up for grabs going into the next-to-last weekend of the regular season. The IU9 will likely send Smethport and Coudersport to the semifinals on Oct. 23-24, but the Southern Region has three teams — Redbank Valley (3-0), Union/A-C Valley (3-1) and Keystone (3-1) — battling for two spots. Two of those teams play this week when Redbank Valley visit Keystone.

If Keystone wins? Well, it appears that gets the Panthers in with the second spot coming down to the final week of the regular season with Redbank Valley needing to beat Curwensville and Union/ACV lose to Brockway to get the other spot.

Last year, the battle for the D9 League’s Small School South title wound up a three-way tie between Redbank Valley, Union/A-C Valley and Keystone because all three finished 1-1 against each other, the Bulldogs beating Keystone (29-8) and losing to Union/A-C Valley while Union/A-C Valley lost to Keystone.

Redbank Valley has given up just 14 points and two touchdowns and 400 yards over its three games. It’ll face a Keystone squad that’s averaging 247 yards of offense. Senior Nick Weaver has rushed for 306 yards on 51 carries and seven touchdowns. He also leads the team in receiving with eight catches for 132 yards and two TDs.

Quarterback Bret Wingard has thrown for 311 yards, completing 24 of 49 passes for 311 yards with three TDs and five interceptions. Altman has rushed for 134 yards on 30 carries. Keenan Heeter (5-86, 1 TD) is the second-leading receiver behind Weaver.

PASSING MILESTONES — While Brookville’s Jack Krug has been climbing up the district’s all-time passing yardage and TD honor roll, two other quarterbacks are on the “Jim Kelly List.” What’s the Jim Kelly list? Well, when it comes to anything regarding District 9, it’s any list that Jim Kelly is on. The East Brady native who threw for 3,915 yards in high school, of course, went on to forge a Hall of Fame career in professional football, first with the Houston Gamblers of the USFL and then the Buffalo Bills.

Otto-Eldred’s Cole Sebastian is on the verge of going over 5,000 career yards while Central Clarion’s Cal German is close to hitting 4,000 yards. There are 34 D9 quarterbacks who have thrown for 3,400 or more yards. That could hit 35 this week with St. Marys quarterback Christian Coudriet sitting at 3,331 yards.

Here’s the updated list going into this week’s games:

Here’s a look at the rest of Friday’s schedule. Every game minus Curwensville at Brockway (7:30 p.m.) has a 7 p.m. kickoff:

The Wildcats travel to Butler County to take on the Gremlins in what’ll be a playoff positioning matchup in Class 2A. Brookville, the Wildcats and Gremlins will be three of the four playoff teams, so how they stack up in what order is still up for grabs. And using comparative scores, it also appears to be an interesting matchup.

Both teams lost to unbeaten Brookville by very different scores, the Wildcats 49-30 and the Gremlins in a 44-0. Last week, Central Clarion grinded out a 15-7 win over DuBois. Karns City wiped out the Beavers 55-14 two weeks ago.

Both German and Burford have reached or are close to reaching milestones. German, with 53 career TD passes, has 3,820 career passing yards as he nears the 4,000 mark while Burford went over 2,000 career receiving yards. He sits at 2,019 with 78 catches and 29 TDs.

The Warriors trek to DuBois for what could be a good matchup of teams looking for their second wins. Both teams’ lone wins have come against Punxsutawney, the Warriors in a come-from-behind 21-14 win at Punxsutawney and the Beavers a 24-0 shutout at home.

The Raiders host the winless Chucks looking to solidify their spot in the Class 2A playoffs, renewing the Route 36 Trophy Game this week on Homecoming Night.

The Chucks head north to the county seat of Jefferson County losers of 20 straight games. They’ve been outscored 136-20 so far including two straight shutout losses. Last week, the Chucks were blasted 49-0 by a Karns City team that was coming off a 44-0 loss to Brookville.

Krug also reached the 7,000-yard passing club and passed Clearfield’s Isaac Rumery into the No. 5 spot on the all-time list with 7,235. He’s 705 yards behind DuBois’ No. 4 passer Gabe French.

It’s rematch time for the IU9 Large as all four teams replay one of their earlier matchups. This time, Kane heads to St. Marys after losing 23-7 to the Dutch at home back in Week 3, or the second game for the IU9 teams.

In that one, Christian Coudriet threw for 210 yards and three TDs, completing 21 of 38 passes with an interception. Mitchell Reiter caught nine passes for 81 yards and a TD. The Dutch outgained the Wolves, 300-165.

Kane quarterback Zuke Smith completed 17 of 43 passes for 132 yards with a TD and interception in the loss to St. Marys. The Wolves managed just 33 yards rushing on 20 carries. Ricky Zampogna caught seven passes for 69 yards.

Two weeks ago, the Elkers routed the Owls 45-14 in Bradford. This time around, it’s a rematch in Johnsonburg.

The first time around, the Elkers limited the Owls to just 25 yards of offense, including minus-26 yards rushing. Ten different Elkers ran the ball with four scoring touchdowns. Quarterback Ben Briggs completed 8 of 11 passes for 99 yards and a touchdown.

The Elkers are coming off a 34-7 loss to St. Marys, so they’ll look to rebound. For the season, the Elkers are about as balanced as you can get offensively, 267 rushing yards, 260 passing yards. Briggs has passed for that 260 on 18-for-30 throwing with a touchdown and interception. Camron Marciniak has rushed for 90 yards on 24 carries with four TDs. Will Howard has five receptions for 117 yards and a TD.

Bradford quarterback Austen Davis didn’t play in last week’s 51-7 loss to Kane. Sophomores Lucas Laktash and Troy Adkins combined to go 5-fof-10 for 109 yards with two interceptions. Elijah Fitton ran for 50 yards on eight carries. The Owls have rushed for 67 yards on 63 carries for the season.

The Rovers host the Tide, who gave Keystone plenty of trouble in last week’s 26-16 loss. Brockway was in District 4 land securing its first win with a 32-14 triumph at Cowanesque Valley.

Two weeks ago, the Rovers were blanked by Keystone 28-0. Against Cowanesque Valley, quarterback Conner Ford completed 11 of 16 passes for 143 yards and two TDs while rushing for 101 yards on 17 carries. Tanner Morelli caught four passes for 66 yards and ran for 67 yards on nine carries.

The Tide hadn’t scored a point in their first two games before testing Keystone last week, leading 16-13 going into the fourth quarter. Quarterback Dan McGarry completed 12 of 20 passes for 102 yards while throwing and running for touchdowns. Ty Terry and Thad Butler both caught six passes.

Curwensville hasn’t been able to run the ball, just 77 yards on 65 attempts over three games. McGarry has thrown for 273 yards, completing 36 of 71 passes with a touchdown and five interceptions. Terry (15-124) and Butler (10-77, 1 TD) are his top receiving targets.

The Falcons look to stay unbeaten against the Terrors, who had their game postponed with Cameron County last week.

Coudersport, which beat Elk County Catholic 39-20 last week, is piling up big numbers again. The Falcons have thrown just 18 passes in three weeks, three going for touchdowns and seven completions totaling a whopping 229 yards. But most of the damage is on the ground as they’ve rushed for 313 yards per game. Quarterback Hayden Keck (26-381, 9 TDs), Brandt Kightlinger (43-310, 2 TDs) key the running game.

The Hubbers look to keep pace with Coudersport going into their matchup next week when they host winless Cameron County, which had its game with Otto-Eldred postponed last week.

The Red Raiders were outscored 77-6 in their two losses to Elk County Catholic and Coudersport.

The Bison and Red Dragons square off in a Mountain League showdown of unbeaten teams. The two have played some good ones over the years, although the Bison have won 10 of 12 games since 2008.

The Bison are averaging 338 yards per game with quarterback Oliver Billotte throwing for 376 yards, completing 24 of 42 passes with six TDs against no interceptions. He’s the leading rusher with 91 yards on 15 carries with two TDs. Jake Lezzer (12-249, 3 TDs) is Billotte’s top receiver.

The last time the Falcon Knights faced a WPIAL team, they hosted Imani Christian in the 2017 season opener and lost 50-22. They’ll travel to Beaver County to take on the Class 2A Rams in a non-conference tilt.

The Falcon Knights average 290 yards of offense per game — 192 rushing, 98 passing — but were limited to 195 yards and just 41 yards on 34 attempts rushing in last week’s loss to Redbank Valley.