Week 4 football: Bison are back! 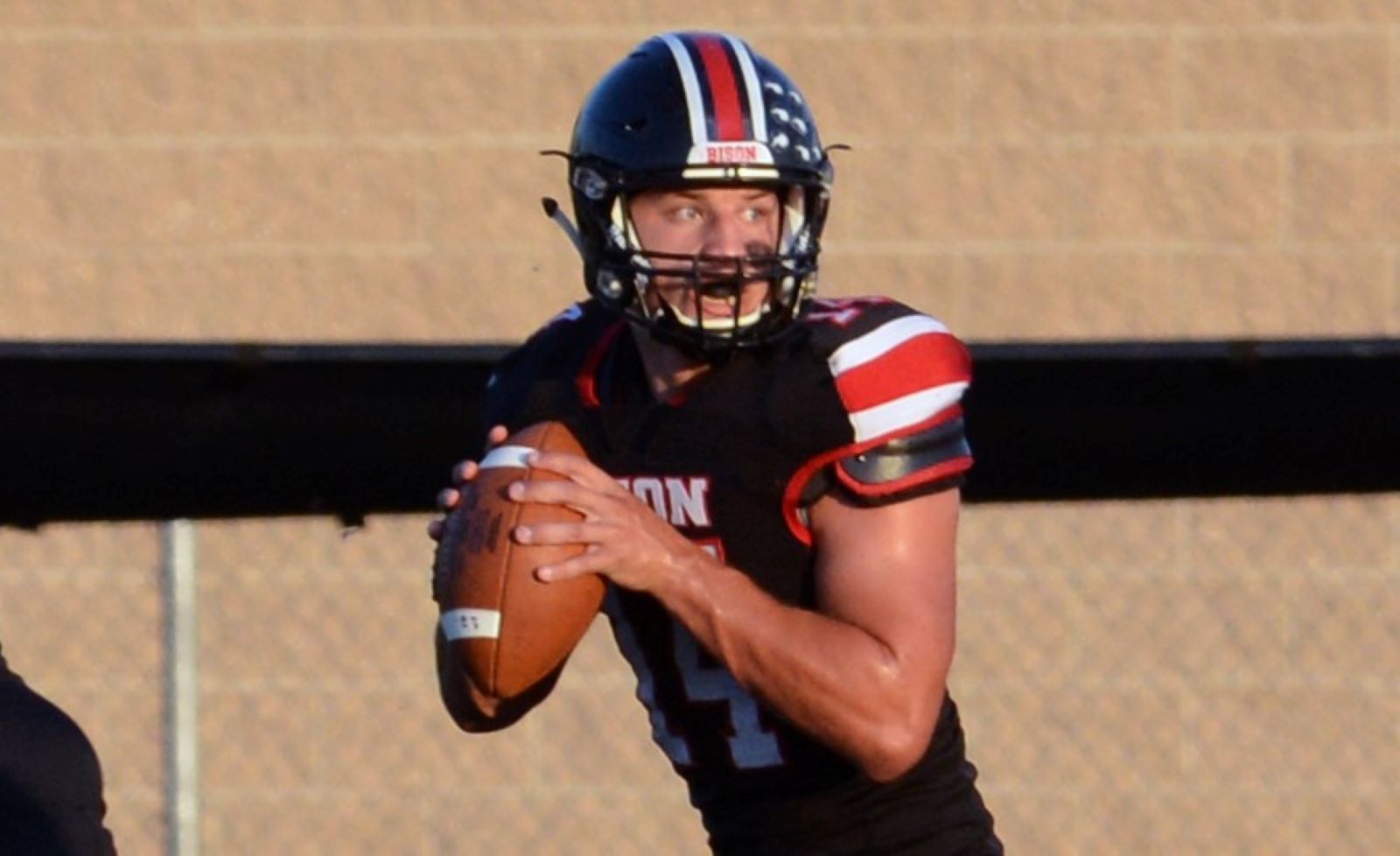 Clearfield quarterback Oliver Billotte leads his team into its first game since Sept. 11 when the Bison host Philipsburg-Osceola in a Mountain League game Friday night.

Eleven games dot the Friday night schedule in District 9 football and one includes the return of the Clearfield Bison after a long layoff when they host Philipsburg-Osceola in a Mountain League game.

COVID-19 concerns with the Bison and their foes have kept them from playing their second game. The last time on the field was the season-opening 27-0 loss to Penns Valley back on Sept. 11. They’ve lost games to Tyrone (Sept. 18) and Bellefonte (Sept. 25) and could have just four games to go in what could be a four-game regular season.

The Bison, a Class 3A team, are one of three D9 teams vying for two playoff spots in the District 5-6-9 Sub-Regional setup. Punxsutawney and St. Marys are the other two district teams and two are set to play in a D9 final on Oct. 23 or 24 with the winner playing the D5 champion on Oct. 31. From there, it’s on to the state playoffs Nov. 6-7.

For the complete playoff plan for all four classifications for D9 teams, read this story.

The Bison host a Mounties team playing its third game. They opened with a 35-20 win over Huntingdon before losing their Week 2 game to Penns Valley. Then last week, the Mounties were routed by Central-Martinsburg, 40-14.

Last year, the Mounties were 1-9, forfeiting their final two games because of low player numbers. One of those losses were to Clearfield. Counting the forfeit, Bison have beaten the Mounties eight straight times dating back to their last loss in 2011 and 19 of 20 since 1996.

Bison junior quarterback Oliver Billotte threw for 222 yards and two TDs in the win over Penns Valley, rushing for 56 yards on 12 carries with the team’s other two scores. Jake Lezzer caught eight passes for 128 yards.

Here is a look at the other games:

It’ll be a showdown at Dutch Country Stadium with two early unbeatens as the Elkers face the Flying Dutchmen. Both teams have beaten Kane and Bradford. The Elkers held off Kane 17-14 in the season-opener while the Dutch topped the Wolves 23-7 last week.

The Wolves lost 23-7 to St. Marys last week and 17-14 in their opener, so they won’t be feeling sorry for the winless Owls who have been outscored 114-27 in their losses to St. Marys and Ridgway.

The Owls haven’t done much at all rushing the ball, 10 yards in two games, with their quarterback Austen Davis completing 14 of 29 passes for 136 yards with a touchdown and interception. Dalton Dixon (2-92, 1 TD) and Jake Pattison (8-46) are his top receivers.

The Raiders head to West Sunbury to face the Warriors, who just gave up 430 passing yards to Cal German in a 46-14 loss to Central Clarion. Moniteau was down 26-14 before giving up 20 unanswered points in the fourth quarter.

It’s likely that the Raiders will challenge the Warriors through the air as well as senior quarterback Jack Krug, who has thrown for 913 yards, completing 72 of 109 passes for 12 touchdowns against one interception. He’s now No. 6 in the district in passing yards (6,906) and is 229 yards shy of tying Clearfield’s Isaac Rumery for the No. 5 spot. Krug’s 89 TD passes are No. 3 all-time, six behind No. 6 Derek Buganza of Brockway.

The Warriors have losses to two teams the Raiders have beaten — Karns City (31-8) and Central Clarion last week. The Raiders are coming off a 44-0 rout of the Gremlins and a 49-30 win over Central Clarion.

The Gremlins and Chucks look to rebound from shutout losses last week, the Gremlins at Brookville and the Chucks at DuBois.

Karns City was limited to 74 yards of offense and were intercepted six times in the loss to the Raiders. Running back Jayce Anderson (13-120) still leads the Gremlins in rushing despite just two carries last week. Quarterbacks Eric Booher and Brayden Christie are a combined 10-for-32 for 170 yards with six interceptions so far.

The Chucks were limited to 90 yards in their loss to DuBois. Quarterback Kameron Falgout has completed 23 of 43 passes for 230 yards with two TDs and four interceptions. Zeke Bennett (56-162) is the top rusher.

The Wildcats’ Cal German, coming off his 430-yard passing effort against Moniteau, nears a milestone as his 3,624 career yards is closing in on the 4,000-yard mark. He’s thrown for 52 TDs.

German, who has completed 51 of 92 passes with 13 TDs against two interceptions so far, has worked well with his top receiver Ethan Burford once again. Burford caught six passes for 219 yards and three TDs last week, is up to 15 catches for 441 yards and six TDs while Cutter Boggess has caught 19 passes for 275 yards and three TDs while running for 101 yards on 16 carries. Breckin Rex (20-130, 1 TD) is the team’s top rusher.

DuBois ended a 12-game losing streak on the field dating back to the end of the 2018 season with last week’s 24-0 shutout of Punxsutawney, netting first-year head coach T.J. Wingard his first win.

Quarterback Cam-Ron Hays has thrown for 419 yards and two TDs against two interceptions while completing 38 of 58 passes. Zach Henery (26-145) is the top rusher while Dale Kot (12-175, 2 TDs) is Hays’ top receiving target.

Looking to keep pace in the Southern Region Class 1A playoff race with Union/A-C Valley and Redbank Valley and prepping for next week’s showdown with Redbank Valley, the Panthers travel to winless Curwensville.

The Tide have been outscored 89-0 in their losses to Redbank Valley and Union/ACV. Curwensville quarterback Dan McGarry has completed 24 of 51 passes for 171 yards with four interceptions. His top receiver is Ty Terry (9-82).

It’s been a dominant start for the unbeaten Falcons who host the Crusaders. In routs of Port Allegany and Cameron County, Coudersport has an aggregate score of 105-6.

The Falcons have thrown just 10 passes in the two games with Hayden Keck completing 5 of 9 for 148 yards and two TDs. He’s the team’s top rusher as well with 262 yards on 14 attempts with six TDs. Brandt Kightlinger has rushed for 200 yards on 23 carries with two TDs.

The Crusaders, after beating Cameron County 32-6 in their opener, are coming off a 39-6 loss to Smethport. Running back Sam Kaul has done much of the work offensively, rushing for 238 yards on 18 carries and two TDs. Nick Crisp (34-123) is another threat out of the backfield while quarterback Mason McAllister has completed 11 of 24 passes for 127 yards.

Terrors senior quarterback Cole Sebastian is on the verge of hitting a milestone as his team hosts the winless Red Raiders.

The Red Raiders have been outscored 77-6 in their two losses, including 45-0 last week to Coudersport. Dylan Baney ran for 73 yards on 12 carries against the Falcons.

The Hubbers look to keep pace with Coudersport at the top of the IU9 Small School North when they host the Gators. Quarterback Noah Lent has done it all for the Hubbers so far, completing 13 of 26 passes for 250 yards and four TDs while rushing for 254 yards on 28 attempts with six TDs. Braedon Johnson has rushed for 326 yards on 34 carries and four TDs.

Looking to make up a bye week created by the season-ending move by Sheffield after the opening week of the season, the Rovers travel north to Westfield — about 100 miles into the northern part of District 4 — to face the winless Indians.

Much of the Indians’ offense revolves around junior quarterback Tucker Stpeter, who has completed 24 of 51 passes for 431 yards and two TDs with two interceptions while also leading the team with 111 yards rushing on 33 carries.

For the Rovers, quarterback Conner Ford has completed 23 of 46 passes for one touchdown against five interceptions. Tanner Morelli (5-125) and Ben Glasl (7-101) are his top targets. Conner Ryckman (17-51) and Ezra Swanson (24-51) are the leading rushers).