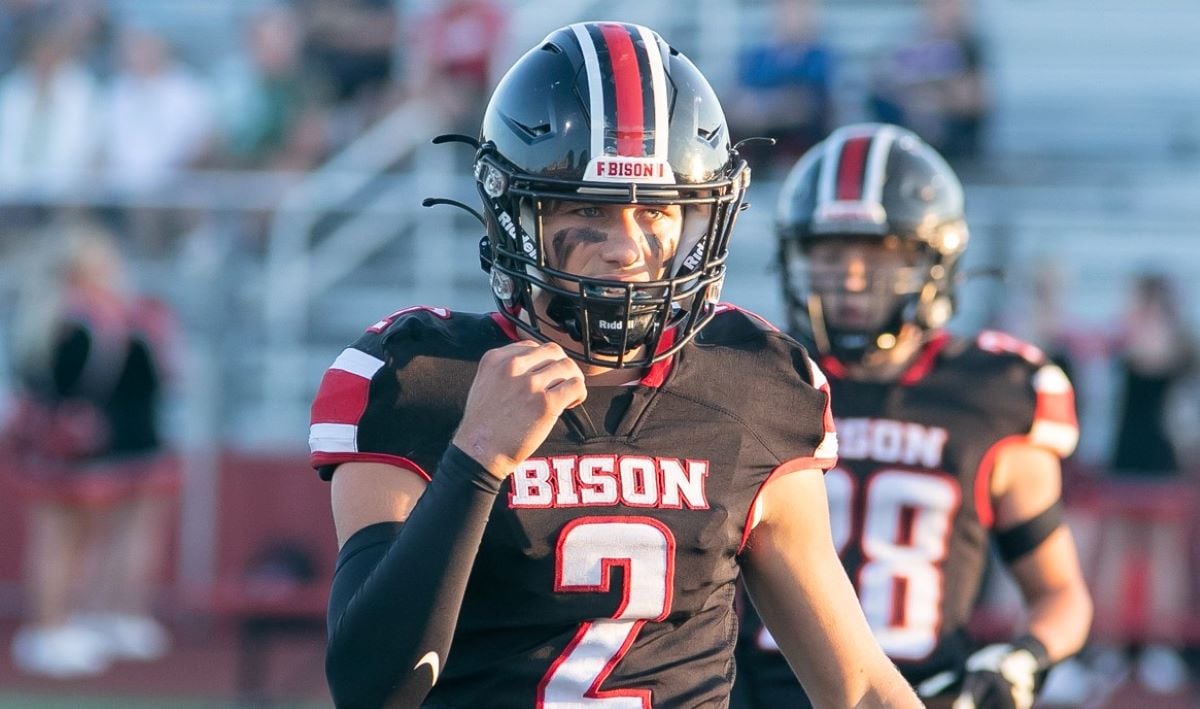 PHILIPSBURG, Pa. – Will Domico was a perfect 8-for-8 for 249 yards and five touchdowns to lift Clearfield to a 56-0 win at Philipsburg-Osceola.

Three of those scoring passes went to Isaac Samsel and two went to Carter Freeland.

Samsel had four catches for 129 yards and Freeland three for 114.

Brady Collins, meanwhile, ran for 122 yards and a touchdown.

FIRST-QUARTER TD STANDS UP FOR BROOKVILLE IN 7-0 WIN

BROOKVILLE, Pa. – Easton Belfiore’s 75-yard touchdown pass to Noah Peterson in the first quarter accounted for the game’s only score as Brookville notched its first win of the year in a 7-0 win over Moniteau.

From there, it was a struggle for both teams who combined four nine turnovers with Moniteau committing five on four interceptions, two by Peterson and Brayden Kunselman and one by Belfiore.

Belfiore completed 10 of 16 passes for 197 yards with Peterson catching three passes for 89 yards. Jackson Zimmerman ran for 132 yards on 19 carries. The Raiders (1-3) outgained the Warriors, 362-194, but fumbled away two possessions inside the Moniteau 6-yard line.

NEW BETHLEHEM, Pa. – Cam Wagner threw for 389 yards and six touchdown passes to lead Redbank Valley to a 42-7 rout of Keystone in a matchup of to 3-0 teams.

Keystone actually led 7-0 on Tyler Albright’s 6-yard run at the 7:54 mark of the first quarter before the Bulldogs scored all six of their touchdowns on Wagner passes by the 3:55 mark of the second quarter.

Wagner connected three times with Ashton Kahle for 30, 3 and 16 yards, Aiden Ortz for TDs covering 65 and 85 yards and Mason Clouse for 16 yards.

Ortz’s 85-yarder completed the game’s scoring with just under four minutes to go in the first half. He finished with four catches for 161 yards and intercepted a pass. Kahle caught four passes for 87 yards and picked off two Rayce Weaver passes in a night where the Bulldogs forced five Keystone turnovers.

Kyle Nellis ran for 89 yards on 16 carries while Albright finished with 65 yards on seven carries. Weaver completed 3 of 11 passes for 20 yards.

Ferguson threw for 249 yards, completing 12 of 23 passes and connecting with Ashton Rex on scoring strikes of 43 and 50 yards, Tommy Smith for 42 yards and Dawson Small for 36 yards. Ferguson also ran for 53 yards on 10 carries with a 6-yard run.

The Wildcats led 28-7 at halftime, Ferguson’s 36-yarder to Smail coming with 34 seconds on the second-quarter clock. The Uckert field goal in the third quarter, and Quinn’s TD run and Ferguson’s 50-yarder to Rex setting the Mercy Rule clock into motion with 8:06 remaining. Rex caught nine passes for 161 yards.

Zeke Bennett ran for 119 yards on 26 carries, scoring the Chucks’ only touchdown and tying the game at 7-7 with his 30-yard run at the 3:39 mark of the first quarter.

RIDGWAY, Pa. – Ricky Zampogna ran for five touchdowns to lift Kane to its first win of the season, 48-27, at Ridgway.

Ridgway (0-4), which got two touchdown catches from Isaiah Jackson and a touchdown run by Aiden Zimmerman, actually led 13-8 at the end of the first quarter before a pair of Zampogna scoring runs in the second frame gave Kane a 22-13 halftime lead.

The Elkers were still within eight, 28-20, following a 72-yard kickoff return for a score by Jackon Kilpeck midway through the third quarter but couldn’t slow down the Kane rushing attack with Zampogna scoring twice more and West adding a touchdown run.

Jackson had two catches for 47 yards and the two touchdowns for Ridgway with one coming from Cameron Larkin (6 of 10, 140 yards) and the other from Derek Beimel (1 of 3 for 9 yards). Jackson added four carries for 45 yards.

Zimmerman ran nine times for 62 yards and the score and caught three passes for 37 yards.

Drew Evens threw two of his three touchdowns in the second quarter, both to Noah Archer, as the Gators (3-1) opened up a 32-0 halftime lead.

Evens finished the night 13 of 20 for 217 yards while Archer caught seven passes for 122 yards and two scores. Kaden Price had the other touchdown catch from Evens and made two grabs for 56 yards.

Archer also scored a rushing touchdown and ran nine times for 49 yards, and Blaine Moses added a score on the ground while rushing for 27 yards on six carries.

Backup quarterback Nick Wilfong threw a score as well going 3 of 6 for 38 yards with a 15-yard touchdown pass to Tristan Kiser.

Maddox Baughman went 7 of 17 passing for 56 yards for Cameron County (0-4), who was held to just 54 yards of total offense after being limited to negative two rushing.

COUDERSPORT, Pa. – A week after giving up 70 points in a loss to Brockway, Coudersport used a combination of ball control and stout defense to shutout visiting Smethport, 16-0.

The Falcons (2-2) allowed just 168 yards of offense to the Hubbers (1-3) in part due to the fact that Coudersport held the ball for over 35 minutes to just 12 for Smethport.

Coudy was able to possess the ball with a strong rushing attack that featured 55 carries for 182 yards led by a balanced attack.

Smethport, which ran just 33 plays compared to 62 for Coudersport, saw Ryan Pelchy run the ball seven times for 74 yards while Preston Alfieri was 7 of 15 passing for 87 yards. Ryan Mason had two catches for 65 yards, and Aiden McKean had four catches for 23 yards.

SHEFFIELD NO MATCH FOR ECC

ST. MARYS, Pa. – Frankie Smith’s interception return for a touchdown just 15 seconds into the game set the tone for Elk County Catholic in a 57-0 win over Sheffield at St. Marys’ Dutch Country Stadium.

Smith scored the game’s first two touchdowns before ECC even ran an offensive play, as he also returned a puny 28 yards for a score at the 9:25 mark of the first quarter.

Once ECC;s offense did get the ball, they rolled up 307 yards, including 296 on the ground.

Charlie Geci ran 12 times for 74 yards and a touchdown, while Noah Cherry added six carries for 52 yards and two scores. Isaac Dellaquila also added 62 yards on nine totes, Shawn Geci scored on a 58-yard run on his only carry, Smith added three carries for 46 yards, and Ben Reynolds also had a rushing touchdown while carrying the ball three times for 16 yards.

Reynolds also threw a TD pass to Cherry while going 1 of 2 for 11 yard for the unbeaten Crusaders (4-0).

Sheffield (0-3), losers of 14 in a row, was held to negative four yards of offense on 37 plays with Colby Barr going 2 of 10 passing for 1 yard with three interceptions.

Gage Mott-Macalush did run nine times for 40 yards, but the rest of the Sheffield runners lost 45 yards.

Also for the Terrors (3-1), Shene Thomas had a touchdown catch.

BRADFORD, Pa. – Austin Henery scored twice on the ground to help DuBois pick up a 49-20 road win over Bradford.

Cam-Ron Hayes and Brendan Orr also added first-half touchdown runs for the Beavers (3-1), while Dalton Yale scored on a key early second-half run after a bad snap punt by the Owls (0-4)

Talan Reese did a have a big game for Bradford, which dropped its 22nd straight game, going 18 of 30 passing for 317 yards and three touchdowns. Lucas Laktash caught two of those touchdown passes grabbing three balls for 112 yards.

SOUTHERN HUNTINGDON TOO MUCH FOR CURWENSVILLE

Curwensville led 14-12 with under a minute to go before halftime before Dan McGarry had a pass intercepted by Chase Gibbons and returned 20 yards for a score to give the Rockets a 20-14 halftime lead.

And that was all it took to launch Southern Huntingdon to victory, as the Rockets (3-1) outscored Curwensville (2-2) 27-6 in the second half.

Nate Myers ran for a pair of scores and threw two touchdowns to Owen Winter for Southern Huntingdon, while McGarry had a TD pass to Chris Fegert and also ran for a score for Curwensville.