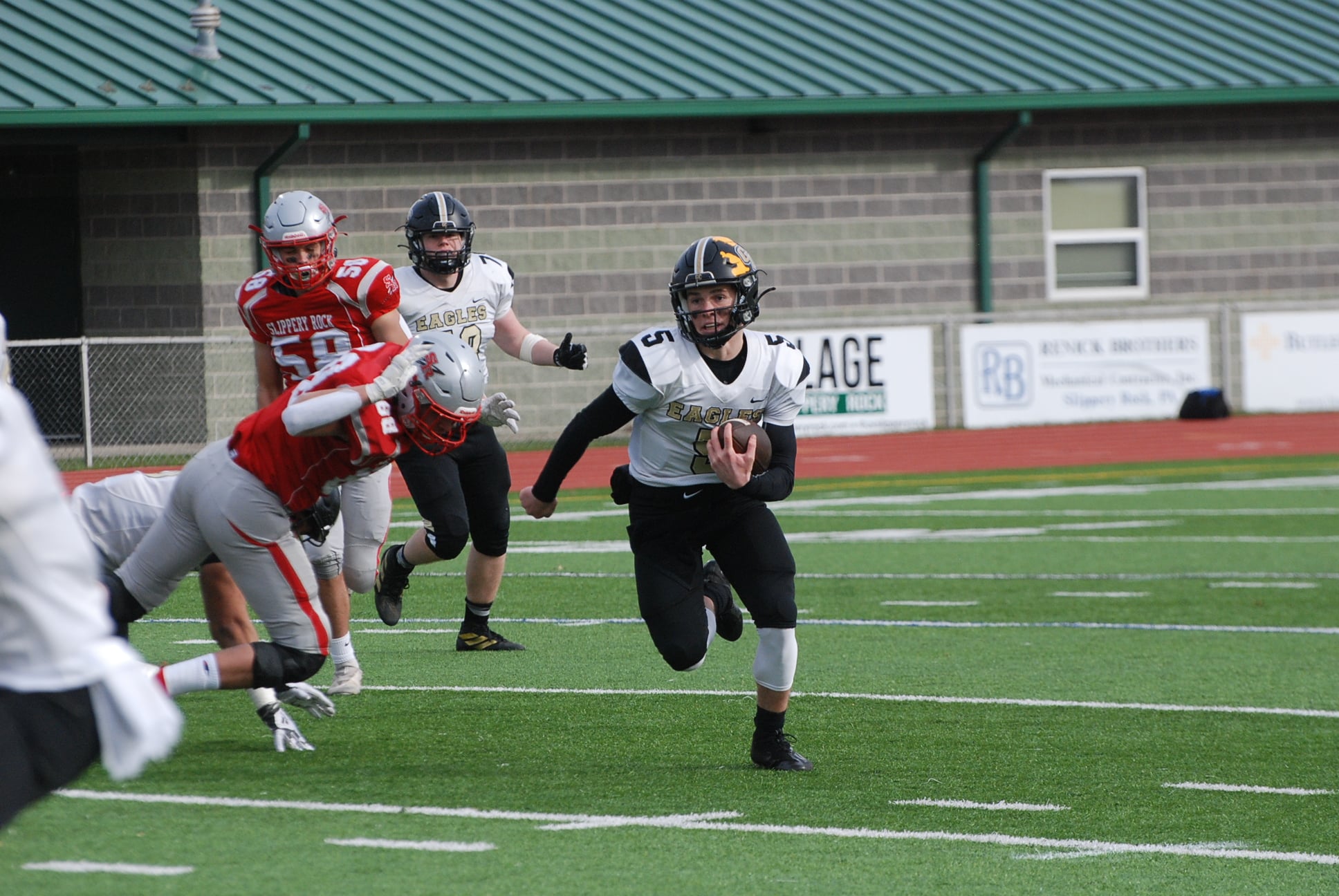 Hunter Hohman and Grove City got a big Region 3 win over Sharon.

OIL CITY, Pa. – Ethen Knox and Oil City’s offensive line were at it again as Knox rushed for 424 yards and five touchdowns in a 64-0 blanking of Route 8 rival Franklin.

Knox now has over 1,500 yards rushing and 22 total touchdowns through four games.

Knox had scoring runs of 35 and 17 yards in the first quarter, and his 60-yard scoring run made it 26-0 in the second quarter.

Carl Chelton put the Oilers up 34-0 on his 51-yard touchdown run just before the half.

Knox had two more touchdown runs in the second half, including an 80-yarder.

GREENIVLLE, Pa. – Kylon Wilson accounted for three total touchdowns and Kabron Smith and Lamont Samuels hooked up for a pair of passing touchdowns as Farrell earned a 46-7 win over Greenville.

Wilson’s spectacular season continued as he continues to impact the game in multiple ways. He rushed for 110 yards and also had a fumble return for a touchdown.

Hohman finished the game with 183 yards passing and 47 yards rushing.

Leading 28-7 at halftime, Anthony Nemec’s 1-yard touchdown run made it 35-7 early in the third quarter and essentially put the game out of reach.

Mikey Rodriques threw a pair of second-half touchdown passes for Sharon, a 20-yard strike to Jayveerh White, and a 22-yard connection to Rayvion Wilbon-Venable.

Lutz, who had 144 yards receiving, put the finishing touches on the win with an interception return for a touchdown.

Rodriquez had 170 yards passing and 60 yards rushing for Sharon, as both teams now stand at 2-2 on the season.

HERMITAGE, Pa. – Trailing 14-0 going into the fourth quarter, Wilmington scored 22 points over the final 12 minutes to rally for a 22-21 win over Hickory.

Buddha Book caught a 7-yard pass from Tuff McConahy to get the Grehounds within one at 21-20. The Hounds went for two and got it courtesy of Ben Miller, who had touchdown runs of five and 18 yards in the fourth quarter.

The Hounds tied the game on Miller’s 18-yard run at 14-14, but Logan Woods caught a 1-yard touchdown pass from Logan Woods to briefly put the Hornets back on top, 21-14.

The Hornets took their lead on the strength of a pair of first-half rushing touchdowns by Sean Kennedy covering 32 and 3 yards.

Tyer Mikulin led Wilmington with 72 yards on the ground, while Kennedy had 76 on the ground for Hickory. Mikulin also had 45 yards receiving.

SLIPPERY ROCK, Pa. – In a battle of Region 3 unbeaten, Caullin Summers threw for 200 yards and four touchdowns to lead Sharpsville to a 28-14 win over Slippery Rock.

It was part of a monster game for Summers, who also had over 100 yards on the ground.

Summer and Garen Levis got the Blue Devils on the board early, connecting on a 62-yard strike midway through the first quarter to make it 7-0.

Slippery Rock responded, controlling the tempo for much of the rest of the half. William Mokel had an 11-yard touchdown pass to John Sabo late in the first quarter, and Maddox Allen’s 4-yard touchdown run gave the Rockets a 14-7 lead with 5:28 to go before halftime.

Summer and Levis hooked up again before halftime, a 53-yard score that knotted the game at 14-all at halftime.

It remained that way until 2:06 to go in the third when Dalton Bylerly caught the first of two second-half touchdown passes from Summers, a 27-yarder that made it 21-14.

Byerly and Summers connected again less than two minutes into the fourth quarter, a 6-yard score that made it 28-14.

The Trojans actually got the scoring going through the air with a 22-yard touchdown pass from Ben Moore to Ray Jackson, which was followed by a Bobby Blue 2-yard touchdown run to make it 14-0.

Artis Simmons scored two rushing touchdowns in the half and Moore and Jackson also found the end zone on the ground to make it 45-0 at halftime.

Stephon Porter became the fifth Trojan to score a rushing touchdown with a 30-yard touchdown in the third quarter that put a cap on the scoring for McDowell.

The Trojans outgained the Royals 488-210, with 318 of those yards coming on the ground. Simmons led the way with 141 rushing yards, while Moore finished with 151 yards through the air, completing 13-of-18 passes. Jackson also added 44 receiving yards.

MEADVILLE, Pa. – Meadville continued its early-season onslaught with a 69-7 win over Titusville in Region 4 action.

Through four games, the Bulldogs have outscored their opponents 193-21, with 14 of those points allowed coming in a win over Butler.

Khalon Simmons had another monster game on the ground for the Bulldogs, rushing for 176 yards and three touchdowns, while also scoring on a punt return and a touchdown pass to Nic Williams.

Brady Walker had three first-half rushing touchdowns as well as the Bulldogs built a 48-0 halftime lead.

Simmons opened the scoring with the punt return for a touchdown and also scored on runs of 5, 66, and 3 yards

CAMBRIDGE SPRINGS, Pa. – Jalen Wagner rushed for 200 yards as Reynolds earned a 46-6 win over Cambridge Springs to improve to 3-1.

The Raiders scored on the first play from scrimmage and never looked back, with Haydin McLaughlin scoring on a 71-yard run.

Andrew McCloskey added an interception return for a touchdown and Brayden McCloskey threw a pair of touchdown passes – a 50-yarder to Travis Blackburn and a 60-yarder to McLaughlin to make it 25-0.

Dajoure Hollingsworth scored on a 2-yard touchdown run for the Ramblers in the first half, which was followed by another long field goal from Constable, this one a 47-yarder.

Suhtaun Lewis had a pair of touchdown runs for the Ramblers in the first half, including a 20-yard burst.

The Ramblers put the mercy rule in effect early in the second half when Luke Costello connected with Camariyon Bridges on a 42-yard touchdown.

Daemyn Mattocks scored on runs of 64 and 21 yards in the first three minutes of the game for the Mustangs, while Carter Addison’s 69-yard scoring run made it 21-0.

Nate Haines made it 28-0 after the first quarter on his 53-yard interception return.

The Mustangs continued to be opportunistic on defense, as Troy Bachman had a Pick Six of his own to make it 35-0 at halftime.

Haines put a capper on his strong night with a 14-yard touchdown run that made it 42-0 in the running third-quarter clock.

LINESVILLE, Pa. – Gavin Rex drilled a 23-yard field goal as time expired to send Warren to a 10-7 win over Conneaut.

Ethan Senz’s 26-yard touchdown run with 7:22 to go in the second quarter gave Warren a 7-0 lead, their only points until the game-winning field goal.

Conneaut tied the game on the next drive, as Logan Groover completed a 45-yard touchdown pass to Joseph Furgiuele on fourth-and-six.

Tommy Nyquist had 200 yards rushing for Warren in the win.

David Graef also had two touchdown runs for the Golden Tornado and Braden Littlejohn (52) and Landon Dubyak (3) had one each in the win.