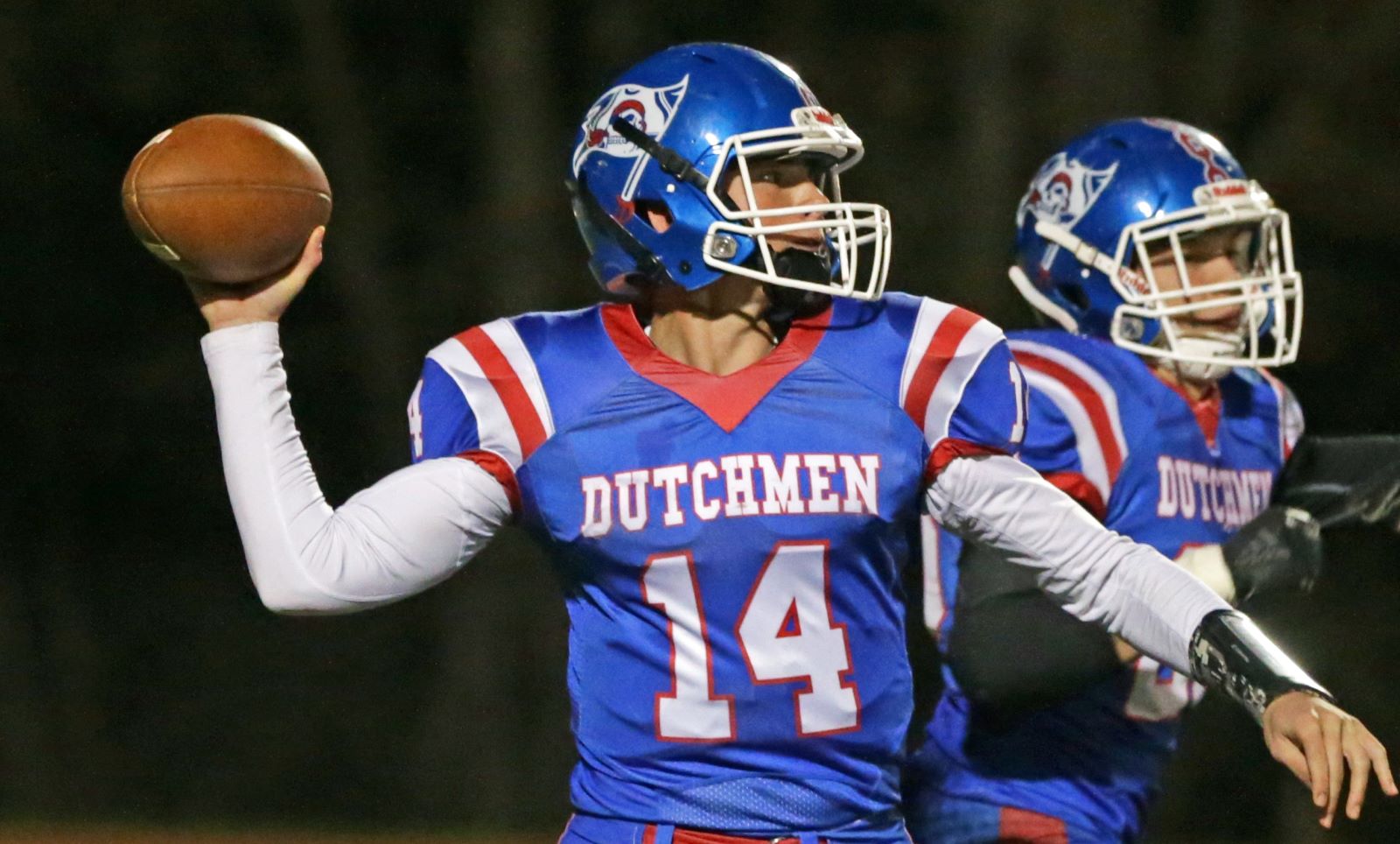 Among District 9’s Southern Region Large School teams, it looked to be a battle out of the gate for Class 2A supremacy among Central Clarion, Brookville and Karns City.

Last week, Brookville pulled away in the fourth quarter for a 49-30 win over Central Clarion. This week, the Raiders host Karns City Friday night in another key matchup.

The Raiders-Gremlins showdown highlights a list of 10 games on the district’s football schedule. It’s two less than usual considering that Redbank Valley’s trip to Sheffield on Saturday is canceled and Clearfield has postponed its second straight game due to COVID-19 concerns.

Clearfield, which beat Penns Valley 27-0 in its opener, is scheduled to host Philipsburg-Osceola Oct. 2.

POSTSEASON OUTLOOK — The unknown postseason setup got some clarification when the PIAA released its six state playoff brackets on Wednesday. See story here.

All that points to a likely championship-only round of playoffs the previous week in at least Class 1A and 2A. District 9 has not confirmed how its playoffs will be run in those classes, or the others since other districts are involved with those plan. Details should come soon.

SHEFFIELD GONE, FOR NOW — After one game, the Sheffield Wolverines are no more, at least for this year. The season started without Abraxas in the previous co-operative setup due to COVID-19 concerns and ended after an 86-0 loss to Keystone. Click here for story about the PIAA approving a one-year setup between Sheffield and Warren with the possibility of the Abraxas/Sheffield co-op getting re-established for 2021.

Here’s a closer look at this Friday’s games:

Last year’s 42-41 double-overtime thriller won by Brookville in Karns City was one of the best games in D9 last year, so it’ll be a tough act to follow.

But on paper, it very well could be a good one with the traditional run-heavy Gremlins clashing with the Raiders and their passing game led by quarterback Jack Krug.

The Raiders are coming off a big win over Central Clarion, scoring the game’s final 19 points after entered the fourth quarter tied at 30-30. Krug has thrown for 642 yards, completing 46 of 72 passes with eight TDs and just one interception. He’s three yards shy of tying Smethport’s Mike DeFilippi for sixth place on the D9 all-time passing yardage list, 6,638 to 6,635, and he’s two TDs shy of tying DuBois’ Gabe French for No. 3 on that all-time list, 87-85.

Against Central Clarion, the Raiders put a running back over the 100-yard mark in a game for the first time since 2017 as sophomore Braiden Davis ran for 107 yards on 15 carries, giving the Raiders a counter to teams expecting a lot of passing.

Karns City averages 214.5 yards rushing per game and has thrown just 16 passes, only three attempts in last week’s 55-14 rout of DuBois. Last year in the loss to the Raiders, the Gremlins ran for 349 yards while Robert Keth, filling in for the injured Krug, threw for 345 yards.

Jayce Anderson is the Gremlins’ leading rusher out of a crowded backfield of carriers thus far with 120 yards after going for 95 on six carries last week.

The visiting Wildcats look to bounce back from their loss to Brookville by traveling to West Sunbury to take on the Warriors who are coming off their come-from-behind win over Punxsutawney.

Wildcats quarterback Cal German has thrown for 532 yards, completing 34 of 58 passes with eight TDs and two interceptions. Cutter Boggess (13-179, 2 TDs) and Ethan Burford (9-222, 3 TDs) are his top receiving targets with Breckin Rex the leading rusher with 119 yards on 15 carries.

Moniteau is run-heavy as usual of late, with just 21 passes in two games. They ran for 343 yards against the Chucks in a game where they scored the final two touchdowns after trailing 14-7. Mason Mershimer ran for 175 yards on 17 carried with two TDs and leads the team with 225 overall on 28 carries.

Something has to give in this one as the Chucks host the Beavers in a game featuring two on-field losing streaks of note. The Chucks have lost 18 straight games dating back to their last win over St. Marys (24-21) on Sept. 14, 2018.

While the Beavers received a forfeit win over Erie High last year, they haven’t won on the field since Oct. 26, 2018 when they beat Brookville (16-7). That’s a streak of 12 games not counting the forfeit game last year.

These longtime D9 rivals haven’t met since 2015 when DuBois routed the Chucks, 47-13. The Beavers have won five straight over the Chucks since the Chucks’ last win over DuBois, 27-7, back in 2010.

The Beavers are averaging 208.5 yards per game, last week’s 55-14 loss to Karns City hitting that number hard as they were limited to just 192 yards with only 40 yards on the ground. The Beavers have rushed for 63 yards in two games on 38 attempts. Quarterback Cam-Ron Hays is off to a good start, however, completing 31 of 49 passes for 317 yards and two TDs with two interceptions. Eight different players have caught passes with Zach Shilala leading the team with seven catches for 72 yards.

Punxsutawney has moved the ball a bit more in losses to Central Clarion and Moniteau, which it lead 14-7 before the Warriors scored the final two TDs to win 21-14. The Chucks are averaging 265.5 yards per game as senior Kameron Falgout has completed 19 of 34 passes for 193 yards and two TDs with two interceptions and leads the team with 164 yards rushing on 24 carries with a touchdown. Zeke Bennett has rushed for 95 yards on 33 carries and leads the team with 11 receptions for 108 yards.

The Elkers edged Kane while the Owls were roughed up by St. Marys last week. Ridgway led 17-0 before Kane made things interesting.

Ridgway’s two touchdowns were set up fumble recoveries deep in Kane’s own territory, thus skewing the Elkers’ offensive numbers, just 155 yards total with Camron Marciniak running for 49 yards on 14 carries and both TDs. Quarterback Ben Briggs completed 4 of 8 passes for 57 yards. Aiden Zimmerman booted a 25-yard field goal to give the Elkers a 10-0 lead before halftime.

Bradford was routed 69-13 by St. Marys, which piled up 475 yards of offense with 307 yards of it coming through the air via quarterback Christian Coudriet. The Owls managed 161 yards of offense as quarterback Austen Davis completed 11 of 22 passes for 112 yards and a touchdown covering 79 yards to Dalton Dixon.

The Dutch visit the Wolves looking to make it 2-0 after piling up big numbers in their 69-13 rout of Bradford as junior Christian Coudriet completed 22 of 31 passes for 307 yards and five touchdowns.

Coudriet has now thrown for 2,919 yards and 27 touchdowns in 12 games dating back to last year. Against the Owls, seven receivers caught passes led by Bryce Walker’s seven catches for 101 yards and two TDs. Michale Fitzgerald caught six passes for 85 yards and two scores.

Kane rallied from a 17-0 deficit against Ridgway before falling short in a 17-14 loss. Quarterback Zuke Smith completed 11 of 28 passes for 193 yards and two TDs while running for 56 yards on five carries. Harley Morris ran for 26 yards on nine attempts. Josh Buhl caught four passes for 78 yards while Bobby Rumcick had two catches for 76 yards. Both caught a Smith TD pass.

The Rovers and Panthers square off trying to shake off losses last week and in the case of the Rovers, trying to win their first game. Both teams lost to Union/A-C Valley, the Rovers 37-7 in the opener and Keystone 14-7 last week.

For Keystone, it’s averaging 244.5 yards of offense with quarterback Bret Wingard throwing for 188 yards, completing 16 of 28 passes for two TDs and two interceptions. Nick Weaver (14-66, 2 TDs) and Taylar Altman (9-55) are the leading rushers while Weaver leads the team in receiving with six catches for 71 yards and a TD.

Brockway quarterback Conner Ford has completed 17 of 33 passes for 203 yards and one TD against three interceptions. His top receivers are Ben Glasl (4-54, 1 TD), Tanner Morelli (4-91) and Austin Schmader (6-53). The Rovers have rushed for just minus-2 yards in two games, getting limited to minus-35 in the opening loss to Union/ACV and 33 against Redbank Valley.

Since the Falcon Knights became a co-operative program in 2016, they’ve never been 2-0, so it’s new territory for them as they take on a Golden Tide team that was routed by Redbank Valley in their opener before getting the Sheffield-induced off week last week.

The Falcon Knights have outscored their foes Brockway and Keystone, 51-14, so far allowing just 161 yards per game with five interceptions and two of them returned for touchdowns. Offensively, the Falcon Knights don’t boast huge numbers at 206 yards per game as quarterback Tanner Merwin has passed and thrown for exactly 111 yards. He’s thrown for one TD and run for two. Kylar Culbertson and Caden Rainey have rushed for 63 and 59 yards respectively and Rainey has five catches for 56 yards.

Curwensville, which lost to Union/ACV 24-0 last year, managed just 61 yards in its 44-0 opening loss to Redbank Valley. Quarterback Dan McGarry completed 7 of 19 passes for 61 yards and was sacked eight times.

The Crusaders and Hubbers gun for a 2-0 start. Elk County Catholic opened with a Thursday night 32-6 win over Cameron County last week while Smethport routed Otto-Eldred 60-6.

For the Crusaders, two running backs went over 100 yards with Sam Kaul and Nick Crisp, who also had an interception on defense. Quarterback Mason McAllister threw for a touchdown and ran for a score.

The Hubbers got a big night from quarterback Noah Lent in their win over the Terrors. Lent ran for 108 yards and three TDs and threw for 158 yards and two TDs to receivers Richie McDowell and Brandon Higley. Braedon Johnson ran for 180 yards on 17 carries and three TDs.

Smethport and ECC split their games last year, the Crusaders winning the regular-season finale 18-0 before the Hubbers flipped it in the first round of the Class 1A playoffs a week later in a 28-6 win.

The Falcons travel to Emporium looking to make it 2-0 after blitzing Port Allegany last week, piling up 560 yards. Player of the Week Hayden Keck, the Falcons’ senior quarterback, threw for 138 yards and two TDs while running for 178 yards on eight carries and four more TDs.

Dylan Rieder ran for 93 yards on 15 carries with a touchdown for the Red Raiders in their loss to Elk County Catholic. Lathan Reed ran for 57 yards on 11 carries.

For Otto-Eldred, quarterback Cole Sebastian threw for 108 yards, completing 14 of 31 passes with a touchdown going to receiver Ethan Smith who caught nine passes for 63 yards.