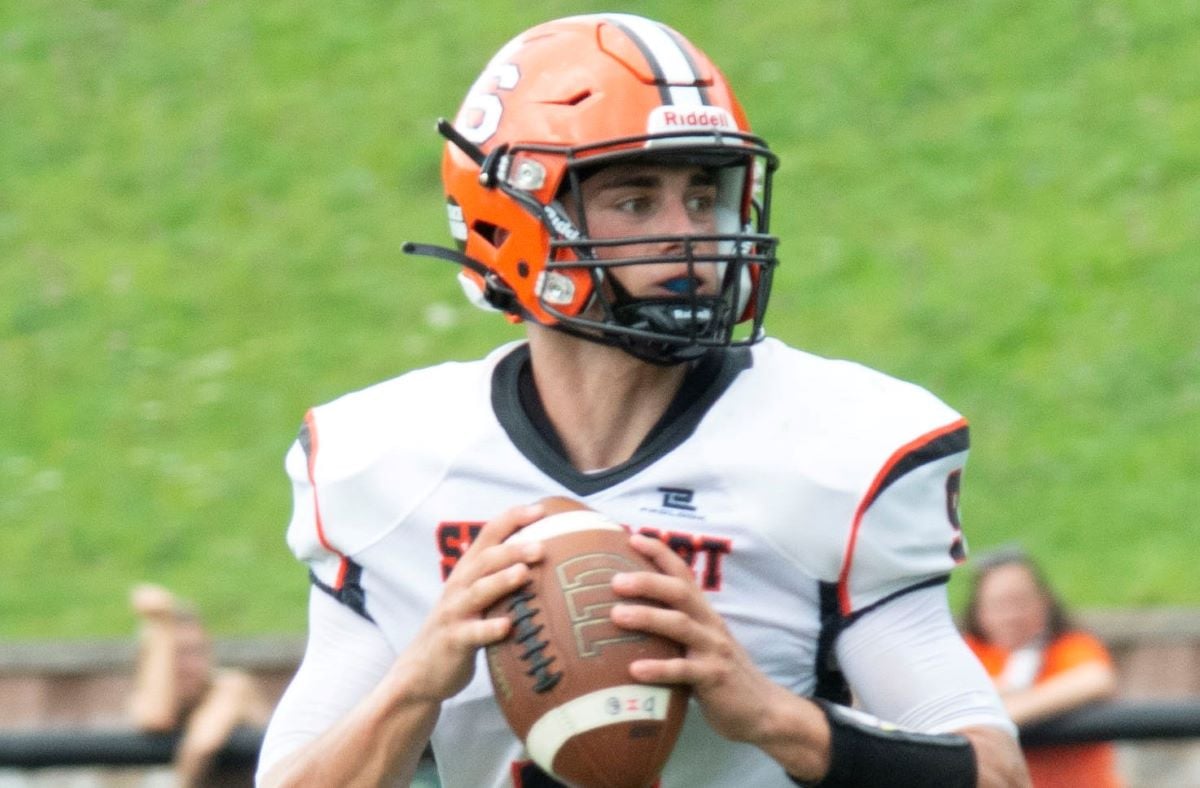 Smethport quarterback Noah Lent, who had a hand in six touchdowns in the Hubbers' win over Sheffield last week, leads his team into Friday night's matchup with Brockway. (Photo by Barb Davis)

Another round of Large School Division matchups to go with North vs. South Small School games make up Week 2 of the District 9 football schedule this weekend.

Ten D9 League games in all along with Clearfield’s Mountain League opener at home against Bald Eagle Area Friday night while Curwensville’s home game Mount Union in the Inter-County Conference was moved to Saturday night due to flooding issues in the Mount Union area.

Central Clarion won’t be playing this week due to Moniteau’s canceling of their game in West Sunbury due to COVID-10 concerns. As of this posting, the rest of the 12-game schedule is good to go.

In the Large School games, Punxsutawney plays its first game of the year after last week’s canceled game with Central Clarion when it hosts Karns City (1-0). The only other game with two 1-0 teams facing each other has Ridgway hosting Kane. Brookville (1-0) travels to DuBois (0-1) and St. Marys and Bradford both gun for their first win when the Flying Dutchmen travel to Parkway Field in Bradford.

The list Small School games between divisions is headed by Smethport hosting Brockway in a pair of 1-0 teams along with Keystone traveling to Port Allegany in another game featuring two teams coming off wins.

In Smethport, the Hubbers are coming off a lopsided win against Sheffield, which returned to the field for the first time since last year’s season-opener. Senior quarterback Noah Lent completed all seven of his passes for 170 yards with four touchdowns and ran for 104 yards on five carried with two more scores. Alex Ognen caught five passes for 109 yards and two TDs. On defense, John Adamoski had two of the Hubbers’ five interceptions.

Smethport will be looking to stop the Brockway passing game that features freshman quarterback Brayden Fox, who completed 23 of 44 passes for 282 yards and three touchdowns and three interceptions with most of the yardage coming in the first half in a 28-20 win over Union/A-C Valley.

The Raiders beat the Beavers last year twice in the trimmed down, regional scheduling by scores of 42-28 and 35-13. While the Raiders pulled way for a 36-6 win last week against Bradford, the Beavers dropped a 27-7 game at Clearfield.

Sophomore quarterback Charlie Krug made his varsity starting debut for the Raiders, completing 19 of 23 passes for 209 yards and a touchdown. Junior receiver Brayden Kunselman caught 10 passes for 146 yards and returned the game-opening kickoff 83 yards for a touchdown.

Both teams are coming off wins, Kane a 21-6 victory over Moniteau in Todd Silfies’ return to the Wolves sideline and Ridgway a 24-6 shutdown of St. Marys.

The Wolves got a solid game from senior quarterback Harley Morris, who completed 13 of 23 passes for 126 yards and a touchdown while running for 54 yards on nine carries. Junior running back Ricky Zampogna ran for 58 yards on eight carries and a TD. Both Morris and Zampogna had two of the team’s four interceptions on defense with Jake Costanzo leading with 12 tackles.

Ridgway had an efficient start to the season, piling up 358 yards of offense on St. Marys. Quarterback Johnathan Hinton completed 10 of 11 passes for 99 yards while Dom Allegretto ran for 126 yards on 12 carries with two TDs to go with an interception on defense. Camron Marciniak added two rushing TDs on 42 yards. Will Howard caught six passes for 75 yards.

The Dutch travel to McKean County to take on the also 0-1 Owls. St. Marys was limited to one touchdown on a Matthew Davis 4-yard run in its 24-7 loss to the Elkers while Bradford managed one score on quarterback Elijah Fitton’s 1-yard TD run in a 36-6 loss at Brookville.

Fitton completed 10 of 22 passes for 151 yards, but was intercepted three times

It’s the season-opening game for the Chucks, who had their opener with Central Clarion canceled due to COVID-19 concerns at Punxsutawney. They’ll face a Karns City team coming off a 35-17 rout of Girard of District 10.

The Gremlins pounded their way to a 35-0 lead in the first half. Luke Garing ran for three touchdowns while Nate Garing led the team with 70 yards rushing and two TDs, one of them a 43-yard run and the other a 12-yard pass from quarterback Eric Booher.

It’s another intriguing matchup among the Small School teams in the district as the Panthers, coming off a big 22-20 win over defending Class 1A champion Redbank Valley, travel north to face the Gators who routed Otto-Eldred, 34-0.

Keystone, however, did it with big plays from its defense and special teams, getting intrerception returns for scores from Kyle Nellis and Steven Shetler, and a huge 80-yard kick return from Zander McHenry to give the Panthers the lead for good with less than seven minutes left in the game. The Panthers were limited to just 83 yards of offense.

The Crusaders host the Falcons as the teams come from different directions, the Crusaders topping Bucktail 20-6 on the road and the Falcons getting shocked by Cameron County in a 28-27 loss.

ECC running back Ben Reynolds ran for 98 yards on 17 carries with two TDs while quarterback Ben Paul completed 7 of 13 passes for 123 yards and a TD. Joe Tettis caught three passes for 93 yards and a score.

The Falcons blew a 13-point lead in the fourth quarter in their loss to Cameron County. Sophomore quarterback Gavyn Ayers passed for 86 yards and a TD while running for a team-high 71 yards and two TDs. Dylan Kelly ran for 54 yards on 13 attempts with James Culvey catching three passes for 56 yards.

While the defending Class 1A champion Bulldogs were edged 22-20 by Keystone, the Terrors were routed 34-0 by Port Allegany, so both teams look to even their record.

Redbank Valley, previously ranked No. 5 in the state by pennlive.com, limited Keystone to 83 yards of offense, but two interceptions returned for touchdowns along with a kickoff cost the Bulldogs dearly. Offensively, the Bulldogs had quarterback Gunner Mangiantini complete 4 of 8 passes for 131 yards and a touchdown and Bryson Bain throw for 63 yards and two TDs. Chris Marshall caught four passes for 42 yards and a score while intercepting a pass on defense.

The Red Raiders opened with a streak-busting 28-27 win at Coudersport, ending a 20-game losing streak. Now, the team will try to win a second straight game for the first time since winning four straight during the 2014 season.

Cameron quarterback Maddox Baughman earned last week’s Jim Kelly Player of the Week Award after leading the Red Raiders to their come-from-behind win over the Falcons. He completed 12 of 24 passes for 215 yards with four TDs against two interceptions. Dylan Baney caught five passes for 133 yards and two TDs. Baughman also picked off two passes on defense while Evan Smith led the unit with 13 tackles.

The Bucks’ lone score came on a fumble recovery and 90-yard return by Brody Pentz in the fourth quarter.

Union/ACV trailed 21-0 at Brockway before turning things around, albeit too late for a win. Losing starting quarterback Bailey Crissman to an injury late in the first quarter, the Falcon Knights were able to put together a strong running game as Mikey Card and Dawson Camper ran for 92 and 75 yards respectively in a 280-yard rushing performance. Camper scored all three TDs on runs of 20, 3 and 2 yards.

Sheffield, after playing just one game last year before shutting down its program, returned to the field against the Hubbers last Saturday. Its lone score came on Malique Outland’s 77-yard fumble return.

The Bison try to make it a 2-0 start against a Bald Eagles team coming off a 20-0 non-conference win over Troy.

Eagles freshman quarterbvack Carson Nagle completed 14 of 23 passes for 123 yards and a touchdown while senior running back Garrett Burns rushed for 53 yards on seven carries with a touchdown. Burns made a whopping 15 tackles on defense.

Clearfield outgained DuBois, 355-93, in its 27-7 opening win. Bison quarterback Oliver Billotte completed 9 of 20 passes for 220 yards and two TDs, most of it going to senior receiver Karson Kline who caught eight balls for 161 yards and a TD. Isaac Samsel had three sacks to lead the Bison defense.

The Golden Tide needed just one touchdown to win their 7-6 opener at home over Everett in their ICC opener. Tad Butler ran for a 42-yard TD and Jake Mullins hit the extra point kick with 7:28 left to take the lead for good.

The Trojans are coming off a 32-8 win at Huntingdon. Quarterback Dayvon Wilson threw for 159 yards and a touchdown while running for another.

2021 District 9 and District 10 Week 2 Football Predictions
Big Plays Send Oil City Past Conneaut; Cathedral Prep Beats Erie as Game Called Early
This website or its third-party tools process personal data.In case of sale of your personal information, you may opt out by using the link Do not sell my personal information.
×
Manage consent