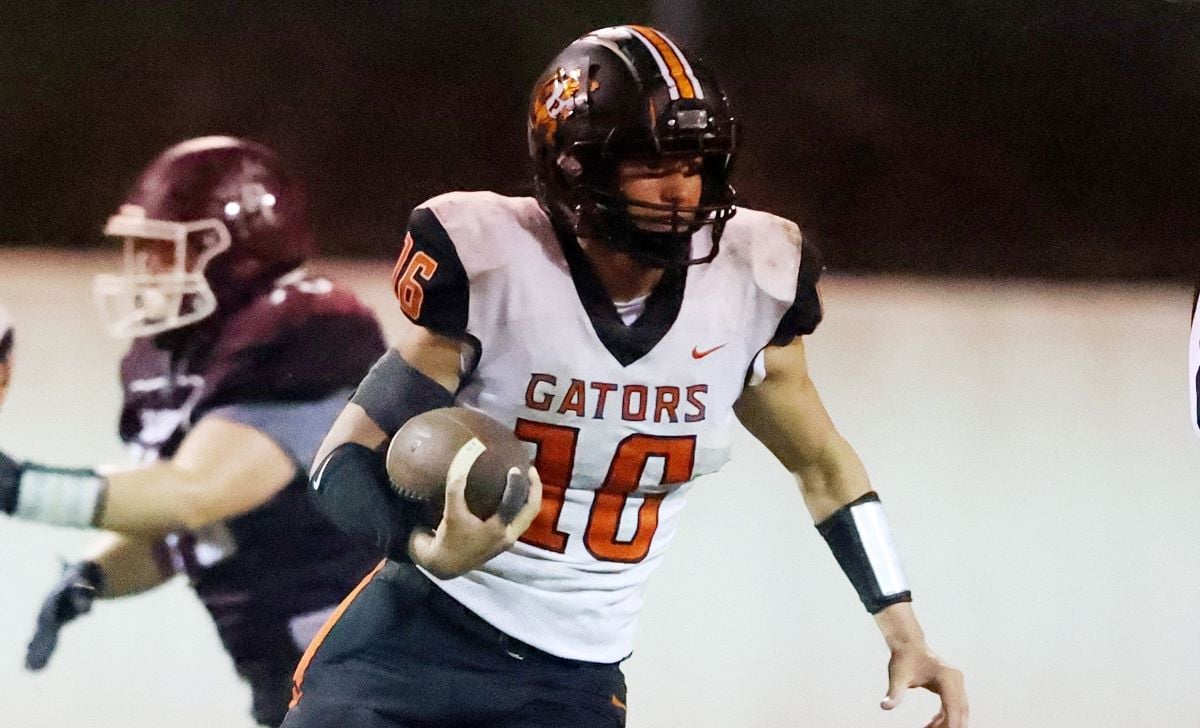 The second week of the District 9 football season features three games with both D9 teams owning 1-0 marks, including a non-region matchup between Central Clarion and Port Allegany.

The Wildcats, coming off a 42-7 win over Brookville, treks to Port Allegany to take on the Gators who opened with a 30-6 victory over Ridgway.

Other games of interest this week include other non-region games has a matchup of two two-time defending D9 champions with Karns City (0-1) visiting Redbank Valley (1-0) while Punxsutawney (1-0) travels to Kane (0-1) and DuBois (1-0) hosts Brockway (1-0).

For the Wildcats, the season got off to a much better start already than last year’s 0-4 beginning. After giving up the first points of the season against the Raiders, the Wildcats scored the final 42 points to finish off a 1-0 start.

Quarterback Jase Ferguson and the Wildcats offense went the big-play route as eight of his 16 passes were completed for 307 yards with four touchdowns. Ashton Rex caught three passes for 216 yards alone, hauling in TD catches of 91 and 73 yards while Dawson Hotchkiss caught a 43-yard TD pass. The Wildcats also returned two interceptions for scores with Ryan Hummell and Brady Quinn.

The Gators turned in a strong effort in their win over the Elkers, limiting them to just 54 yards of offense, just one yard coming on the ground. Blaine Moses led the Gators’ offense with 132 yards rushing on 27 carries with three TDs.

Quarterback Drew Evens ran for 59 yards on nine carries and completed 8 of 16 passes for 64 yards while picking off a pass on defense. Peyton Stiles caught a TD pass from Evens and had four receptions for 49 yards.

It’s the first meeting between the Wildcats and Gators. The last time Port met Clarion-Limestone was in 2018 when the Lions beat them 66-0 in the playoffs. Port beat Clarion twice in playoff matchups in 2011-12.

Here’s a closer look at the other games:

These teams lock up again in what’s been a good matchup at least the last two years with the Falcon Knights notching hard-fought wins, 26-24 in Knox last year and 14-7 two years ago also in Knox.

The Falcon Knights notched a win at home as well in a 27-14 win over Cameron County. Brody Dittman completed 11 of 17 passes for 127 yards and two TDs in his first start at quarterback. Skyler Roxbury caught five passes for 40 yards and Dawson Camper returned a kickoff 73 yards for a touchdown.

While the Hubbers were having a tough go of it in giving up 53 points in the first half in a 53-8 loss at Redbank Valley, the Red Raiders hung in there and held Union/A-C Valley scoreless in the second half of their 27-14 loss to the Falcon Knights.

For Cameron, quarterback Maddux Baughman ran for both of the Red Raiders’ touchdowns while completing 9 of 20 passes for 121 yards. Lathan Reed ran for 43 yards on nine carries.

The Hubbers did most of their work in the second half, of course, as Ryan Pelchy finished with 139 yards on 16 carries and a touchdown.

It’s the second straight Saturday game for the Terrors, who were outslugged 35-30 at Elk County Catholic last week. They’ll try to bounce back against the Wolverines, who dropped a 42-12 game at Bucktail.

The Bulldogs reached the PIAA state final after their second straight District 9 Class 1A title last year while Karns City also won its second title in a row last year in Class 2A. The two square off for the first time since 2017. The Gremlins won three straight over the Bulldogs from 2015-17 after a three-year layoff. The Bulldogs’ last win over the Gremlins came in 2010 in a 28-14 win at Karns City, so it’s a four-game Gremlins’ winning streak at this point.

Last week, the Bulldogs did nothing wrong in overwhelming Cameron County, 53-8, scoring all of their points before halftime. Quarterback Cam Wagner turned in a big game, again all of his numbers coming in the first half as he completed eight of nine passes for 228 yards with five TD passes to five different receivers while also running for one. Drew Byers ran for 134 yards on nine carries, one going 92 yards for a TD.

The Gremlins were doomed by three key turnovers in their 28-7 loss at DuBois. Quarterback Eric Booher completed 12 of 25 passes for 124 yards with Micah Rupp catching four passes for 72 yards. The Gremlins actually did outgain the Beavers, 288-250.

It’s the Class 1A Rovers traveling to the Class 4A Beavers at Mansell Stadium. The only other known meeting in many years was back in 2020 when the Beavers blanked the Rovers, 49-0.

Cam-Ron Hays earned Player of the Week honors after running for four TDs in the Beavers’ 28-7 win over Karns City. He threw for 52 yards on 9-of-15 passes and ran for 84 on 10 carries.

The Rovers trailed 19-6 in the first half before rallying to beat Kane 28-25. Quarterback Brayden Fox threw for 214 yards on 18-of-30 passes with a touchdown to Blake Pisarcick, who also ran for a touchdown. Alex Carlson caught eight passes for 104 yards.

Zeke Bennett got off a to strong start of the season for the Chucks, rambling for 179 yards on 21 carries with four touchdowns while teammate Landon Martz ran for 108 yards on nine carries with a touchdown.

The Wolves led Brockway 19-13 at the half before the Rovers rallied for a 28-25 win. The Wolves’ Ricky Zampogna ran for 146 yards on 18 carries while quarterback Kyle Zook completed 16 of 27 passes for 184 yards.

The Flying Dutchmen are coming off a lopsided 47-14 win over Moniteau while Ridgway looks to rebound from a 30-6 loss to Port Allegany.

Last year, the Elkers beat the Dutch 24-7 after getting swept in two games in 2020. Last week, Dutch quarterback Charlie Coudriet had a big game, completing 7 of 14 passes for 137 yards and two TDs while running for 57 yards on carries and four more scores while having one of the Dutch’s three interceptions on defense.

The Elkers’ lone touchdown in their loss to the Gators came on Cameron Larkin’s 11-yard pass to Eric Hoffman. The Elkers were limited to 54 yards of offense.

The Falcons and Owls meet for the first time since Bradford first entered the now-defunct Allegheny Mountain League in 2016-17 when they split two matchups, the Owls winning the last one 28-8 in 2017.

The Falcons trailed 20-0 in their 33-16 loss at Keystone before scoring twice as Gavyn Ayers threw a TD pass to James Culvey and ran one in himself. Ayers threw for 98 yards on four completions, all of them to Culvey.

The Owls were blanked 56-0 at Punxsutawney last week, their losing streak increasing to 19 games.

The Crusaders racked up some big numbers in their shootout 35-30 win over Otto-Eldred last Saturday, putting three backs over 100 yards rushing with Noah Cherry (28-180), Ben Reynolds (16-112) and Frankie Smith (11-94) and completing just one pass attempt.

The Warriors were routed by St. Marys, committing six turnovers in a 47-14 loss to the Dutch. Hunter Stalker ran for 70 yards and a touchdown for the Warriors. Matt Martino led the defense with nine tackles.

Instead of playing their home opener, the Raiders now have their longest road trip of the season in a first-ever matchup with the Golden Eagles of Blair County and District 6.

Jackson Zimmerman ran for 121 yards and a touchdown for the Raiders last week in a game where both teams turned the ball over six times.

Both teams try to get on the winning side of the ledger after opening losses. It took the Bison two days to finish their loss at Mifflintown, a lightning/storm-delayed 20-7 loss to Juniata.

Brady Collins ran for 80 yards on 13 carries to lead Clearfield. Will Domico completed 4 of 15 passes for 35 yards.

BEA dropped a 20-9 game to Troy. Quarterback Carson Nagle went 22-for-38 for 188 yards and a touchdown, but was intercepted four times. Tre Greene ran for 57 yards and led the defense with 12 tackles.

The Golden Tide visit Alexandria to face a Hornets team in a battle of unbeatens. The Tide used a strong third quarter to get by Meyersdale in a 34-18 win last week. They were trailing 12-7 at halftime.

Tide quarterback Dan McGarry ran for three touchdowns and threw for another.

The Hornets, who didn’t face the Tide last year, opened with a 23-12 win over Glendale last week.

Wings Up: The Raymond Monica Show! Episode 1
Knox Ties Oil City Record in Victory, Prep Rallies for Wild Win in Week 2 D10 Thursday Night Football
This website or its third-party tools process personal data.In case of sale of your personal information, you may opt out by using the link Do not sell my personal information.
×
Manage consent