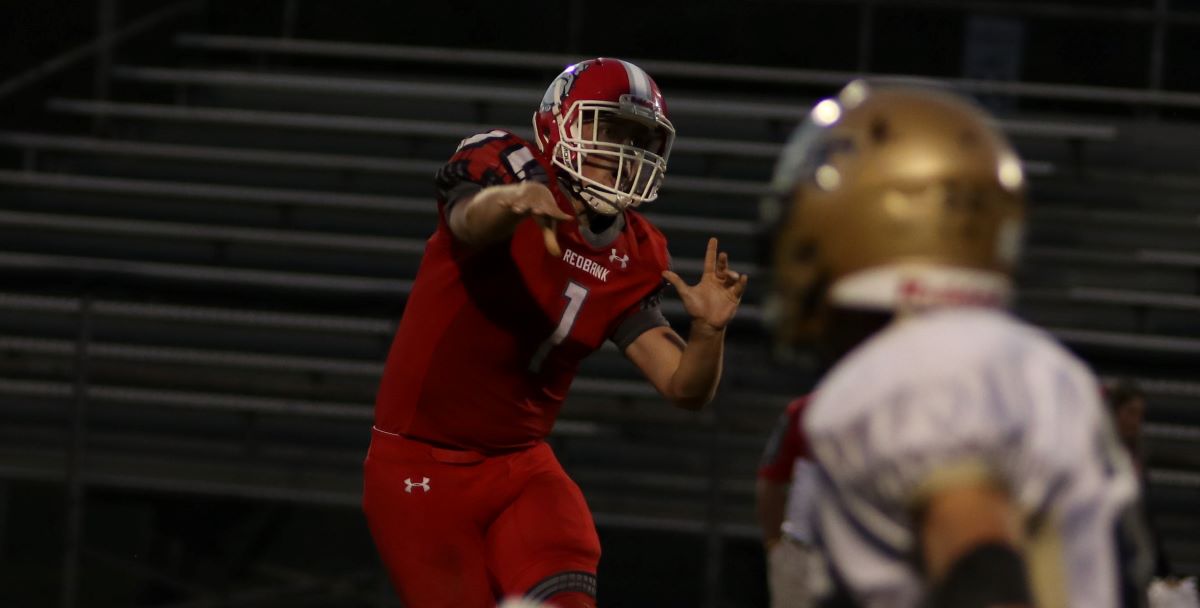 NEW BETHLEHEM, Pa. – Gunner Mangiantini threw four touchdowns passes and just one incomplete pass and also ran for a touchdown to lead Redbank Valley to a 44-0 win over visiting Curwensville.

Mangiantini talked about his game and the win.

Hudson Martz also scored on a 25-yard run for the Bulldogs and reached the 100-yard mark (8 carries, 101 yards) on the ground.

A 22-point outburst in the final 4:19 of the first half turned a 15-0 Redbank Valley advantage into a 37-0 halftime lead and included a 25-yard Mangiantini pass to Gardlock on the final play of the half.

Dan McGarry was 7 of 19 passing for 61 yards for Curwensville.

WEST SUNBURY, Pa. – Scoring three times on special teams, including a pair of touchdowns, Karns City opened the 2020 season with a convincing 31-8 win at Moniteau.

Relisten to the game:

The Gremlins got a 60-yard punt return for a score from Kaden Schrerer, a fumble recovery in the end zone of a high punt snap from Austin Brown and a 25-yard field goal from Owen Collwell to account for 17 of their 31 tallies.

The other 14 points came from sophomore wide receiver Micah Rupp, who caught a pair of touchdowns passes in his first varsity football action.

Rupp snagged a 2-yard toss from Brayden Christie with just eight seconds to play before halftime to give Karns CIty a 14-0 lead at the break and then outran the Moniteau defense for a 66-yard score off the arm of Eric Booher late in the third quarter to make it 31-0. Rupp also recovered an onside kick.

Schrerer added another big play catching a 33-yard pass from Zach Blair on a halfback option toss to set up Rupp’s first touchdown and had three grabs for 36 yards and the tone-setting punt return while being named the Allegheny Grille of Foxburg Jim Kelly Player of the Game.

Booher was 3-for-5 for 99 yards and the touchdown with Rupp catching two passes for 68 yards and Schrerer two for 51 yards.

BROCKWAY, Pa. – Tanner Merwin ran for a pair of touchdowns and threw for a touchdown to lead Union/A-C Valley to a 37-7 win at Brockway.

Merwin carried the ball seven times for 72 yards and was 6 of 12 passing for 57 yards, a touchdown and an interception. The touchdown pass was an 18-yard toss to Karter Vogle.

Baylie Crisman added a touchdown run for the Falcon Knights and had an interception on defense to go with three tackles, while Eli Penny returned an interception for a score and had five tackles, including two for a loss. Carter Terwint led Union/A-C Valley with eight stops and Kylar Culbertson had seven tackles.

STRATTANVILLE, Pa. – Big plays and the Cal German to Ethan Burford connection helped Central Clarion County to a 42-6 win over Punxsutawney in the first game for the Clarion, Clarion-Limestone, North Clarion co-op under the new team name Friday night at Clarion-Limestone.

The Wildcats scored on five plays of at least 40 yards including four of at least 50 yards, and German found Burford for three of his four touchdown passes on the night.

German was 15-for-22 for 312 yards, the four scores and an interception, while Burford caught seven passes for 184 passes and three scores. The duo hooked up on scores 53, 64, and 40 yards. German also hit Christian Simko with a 25-yard scoring pass.

Central Clarion County also got a pair of long touchdown runs with Cooper Shall scoring from 65 yards out and Breckin Rex from 57 yards out. Rex ran seven times for 97 yards and Shall five times for 74 yards. Cutter Boggess had five catches for 83 yards and had seven carries for 24 yards.

Kameron Falgout ran 11 times for game-high 104 yards, with most of it coming on an 84-yard touchdown run, and was 2-for-8 with an interception for Punxsutawney. Zeke Bennett also had five catches for 51 yards.

SPRING MILLS, Pa. – Oliver Billotte threw a pair of touchdowns and ran for a third, and the Clearfield defense pitched a shutout in a 27-0 Mountain League win at Penns Valley.

Mark McGonigal also had 12 totes for 57 yards and a touchdown for the Bison, while Jake Lezzer caught seven passes for 105 yards.

BROOKVILLE — Jack Krug threw for 383 yards and four touchdowns to lead Brookville to a 42-28 win over visiting DuBois.

Krug, who became the eighth D9 passer to go over 6,000 career yards, also moved past Clearfield’s Chad Kroell (6,088) on the all-time yardage list into the No. 7 spot with 6,376 yards. He raised his TD pass total to 81, passing another former Bison Isaac Rumery (78) and Kroell’s 79 into third place all-time.

Krug connected with three different receivers for TDs, two of them with Brayden Kunselman and one each with Braiden Davis and Robert Keth, who also rushed for two touchdowns.

DuBois got an 85-yard kick return for a touchdown from Derraick Burkett. Quarterback Cam-Ron Hayes threw for 183 yards and a touchdown covering 16 yards to Zach Shilala.