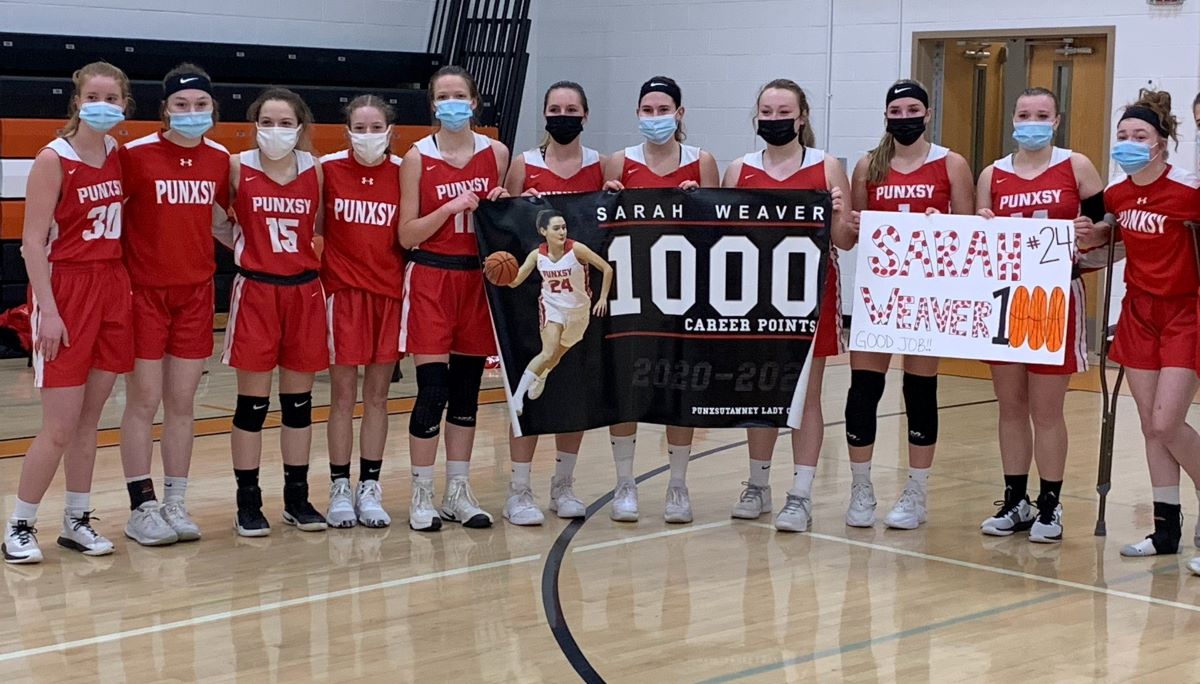 Sarah Weaver - Center holding the banner - with her Punxsutawney teammates after the game in which she scored her 1,000 career point. Photo by Al Modrzejewski

Weaver accomplished the feat on a fastbreak layup off a feed from her longtime friend and fellow senior, Riley Presloid 54 seconds into a 49-29 win at Clarion.

Weaver, who needed one point coming into the game after a 20-point output Friday night in a win over Moniteau, ended the afternoon with nine points, seven rebounds, three steals, and two assists.

She said scoring 1,000 career points wasn’t something she really thought about.

“Honestly, all season I haven’t really thought about the 1,000 points,” Weaver said. “My mentality going into a game is work hard and motivate your team to do better. I just thought the points would come, and they did. I am just very thankful.”

Behind five points from Weaver, the Lady Chucks started fast scoring nine of the first 10 points.

The Lady Chucks then started the second half on a 14-5 run to push the lead to 20, 32-12, with Chloe Presloid hitting a pair of 3-pointers to help fuel the run.

But there was too much Weaver and Riley Presloid in the final eight minutes for the Lady Cats.

Weaver added four more points, including these two on a great pass from Kierstin Riley.

Meanwhile, Riley Presloid caught fire from the outside hitting three 3-pointers in the quarter, including this one with about two-and-half minutes to play.

Thanks to the late barrage of triples, Riley Presloid scored a game-high 15 points while adding four assists, three rebounds, two steals, and a blocked shot.

Jordan Best led Clarion with 11 points, including eight in the second half, while Erica Selfridge contributed 10.

The win pushed Punxsutawney to 16-0 on the season. The Lady Chucks are an incredible 90-1 in their past 91 games against District 9 opponents while winning 28 in a row vs. D9 foes.

Weaver, who now has 1,008 career points, joins an elite group of Punxsutawney players over 1,000 points.

Reynolds Sends Six to 2A Super Regionals, Fort LeBoeuf Has Five Advance
Getting to 1,000 in Style: Needing 12, Garzel Scores 41 in Port Allegany Win
We use cookies on our website to give you the most relevant experience by remembering your preferences and repeat visits. By clicking “Accept All”, you consent to the use of ALL the cookies. However, you may visit "Cookie Settings" to provide a controlled consent.
Cookie SettingsAccept All
Manage consent