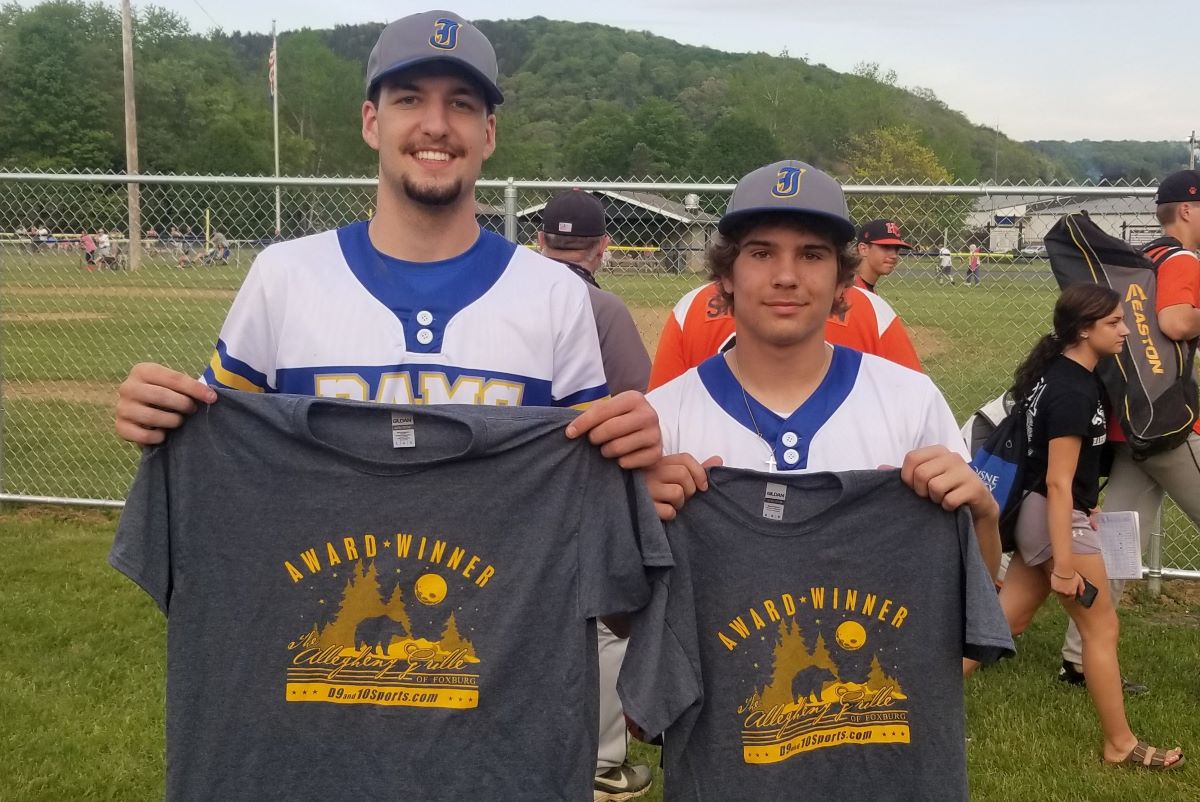 JOHNSONBURG, Pa. – In a battle of two of the top baseball teams in the state, Johnsonburg got a great pitching performance from Gabe Watts to beat visiting Harbor Creek, 4-0, in the regular-season finale for both teams at Johnsonburg’s Knothole Park.

The win completed a perfect 18-0 season for the Rams, while Harbor Creek lost for the second time this week to fall to 18-2.

Watts was the difference.

The senior left-hander went the distance for Johnsonburg scattering five hits while walking three and striking out seven.

“I would probably say my location of my fastball,” Watts said when asked what was working for him Friday.

Watch Watts strike out Caden Herman in the third inning.

Watts, who was named the co-Allegheny Grille of Foxburg Player of the Game with teammate Luke Zimmerman, only faced trouble once.

It was in the fifth inning when Harbor Creek, which used 14 different players, loaded the bases with two outs on an infield single by Brady Rocky, a line-drive single to center by Austin Vaughn and a walk to Cam Williamson on four pitches.

That brought up Cody Smith, who had singled in his first at-bat an inning earlier against Watts. Smith, who came into the game hitting .347 with three home run, presented a lefty-on-lefty match up for Watts.

Johnsonburg manager Mike Porter went out to talk to his pitcher prior to Smith stepping into the box.

“(He told me to) just eep throwing strikes,” Watts said. “I walked a guy before that.”

Watts had trouble throwing his first pitch to Smith for a strike and got behind the tall lefty 1-0. But the second pitch jammed Smith, and he popped the ball up to first baseman Caden Smiley to end the threat.

After the fifth, Watts cruised the rest of the way setting Harbor Creek down 1-2-3 in the sixth.

Casey Smith started the seventh with a base hit to right-center for the Huskies, but Smith was gunned down at second base by right fielder Jefferson Freeburg trying to stretch the single into a double after centerfielder Cameron Marciniak had trouble fielding the base hit.

Watts then retired Cam Miller on a fly ball before getting Herman to ground out to third baseman Dalton Stahli to end the game.

“I just felt like I got a second wind and started throwing again (after the fifth inning),” Watts said.

Watts worked with the lead most of the game thanks to a three-run second inning by Johnsonburg off Williamson.

Making just his third start of the season – one of those first two starts was a five-inning no-hitter against Erie High May 14 – Williamson got into some trouble in the second when Stahli and Kaden Dennis started the inning with back-to-back singles. Stahli went to third on the Dennis infield single when shortstop Eli Moon airmailed his throw to first.

Dennis stole second, but Smiley bunted back to the mound that Williamson turned into an out that erased Stahli, who had ventured two far down the line and was out in a rundown with Dennis staying at second.

Dennis moved to third on a flyout to center by Collin Porter.

With Luke Zimmerman at the plate, Williams tried to pick Smiley off first and threw the ball away allowing Dennis to score the game’s first run.

A couple of pitches later, it was 3-0 Johnsonburg when Zimmerman, a freshman, hit his first career home run, a shot over the right-field fence.

“I hit it and I saw it go up in the air,” Zimmerman, who was named co-Allegheny Grille of Foxburg Player of the Game, said. “My first base coach, I just heard him yell. So I looked over and I saw him (the right fielders) walking by the fence. That’s when I knew. It was awesome.”

Watch the full postgame interview with Watts and Zimmerman

Johnsonburg had a chance to add to its lead in the third when Domenic Allegretto reached on an error and went to second when Marciniak walked. Ethan Wells then bounced a single past shortstop Aidan Kelly, and Allegretto tried to score on the play.

But Rocky, the left fielder, threw a strike to Austin Vaughn, the catcher, and it appeared Allegretto was out by a couple of feet.

The ball, however, was dropped by Vaughn, and the umpire ruled Allegretto safe.

Out of the dugout came Harbor Creek manager Tim McQueeney to argue that Allegretto made avoidable contact with Vaughn and therefore should be out.

After a lengthy discussion that took nearly three minutes, the umpires agreed and called Allegretto out.

Then, in an interesting move, Allegretto was “restricted” to the bench for the rest of the game, unable to play but not “ejected” so to speak. Generally speaking, restrictions in baseball are used like warnings in basketball on coaches where coaches are not permitted to leave the dugout. It is not clear whether a “restriction” can be used on a player.

With runners on second and third and still just one out, Williamson got Stahli to pop a bunt back to him, and Williamson turned it into an inning-ending double play.

The third inning was the final inning for Williamson, who went three innings giving up three runs, all earned, on five hits and a walk while striking out two.

Cam Miller replaced him, and Miller retire the first eight batters he faced until a two-out error on Kelly the shortstop in the sixth opened the door for Johnsonburg’s fourth run.

The error occurred on a ball hit by Erik Panebianco and was followed by a single to left by Dennis and an infield single by Smiley. Porter then singled to right to make it 4-0.

Both teams are the top seeds in their respective district’s playoff brackets.

Johnsonburg is the No. 1 seed in the D9 Class 2A bracket and will face the winner of Monday’s pig-tail game between Keystone and Port Allegany at 4:30 p.m. Tuesday, May 25, at Knothole Park in Johnsonburg.

Harbor Creek is the No. 1 seed in the D10 Class 4A bracket and will face Corry at 4 p.m. Tuesday, May 25, at Mercyhurst University.

May 21, 2021 D9 Baseball/Softball: Bowser’s Power Streak Continues in Keystone SB Win; Punxsy Baseball Clinches Playoff Spot
Raiders’ Day: Brookville Sweeps D9 2A Track and Field Championships; MacBeth, Monnoyer Take Home Manners Award Powered by Janney Montgomery Scott in Clarion
We use cookies on our website to give you the most relevant experience by remembering your preferences and repeat visits. By clicking “Accept All”, you consent to the use of ALL the cookies. However, you may visit "Cookie Settings" to provide a controlled consent.
Cookie SettingsAccept All
Manage consent