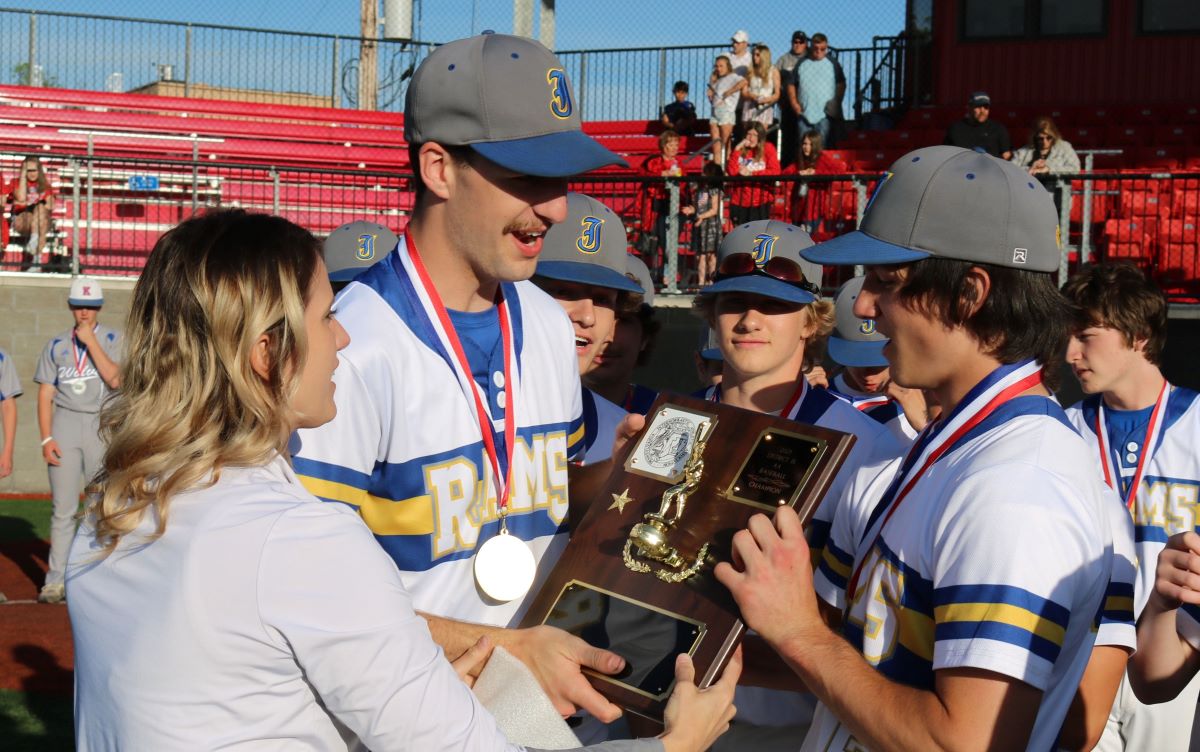 Photo by Bob Parana of the Ridgway Record/Kane Republican

DUBOIS, Pa. – The unbeaten run continues for the Johnsonburg Rams. Now it’s 21-0 with a District 9 Class 2A title.

Gabe Watts and Aiden Zimmerman combined on a four-hitter with 12 strikeouts and the Rams ground out five hits against Kane ace Carson Whiteman in a 4-1 win at Showers’ Field.

Photo by Bob Parana of the Ridgway Record/Kane Republican

Johnsonburg’s first title since 2018 puts it in the state playoffs starting Monday against the WPIAL fourth-place finisher — Carmichaels plays Serra Catholic in the third-place game Tuesday at Washington & Jefferson College starting at 7 p.m. — at a D9 site and time to be announced.

The Rams scored all four of their runs off Whiteman, who had yielded just four earned runs all season to go along with his 128 strikeouts in 52 innings going into the game. They scored a run in the first and three in the third.

“We knew Carson (Whiteman) was going to be on the mound and he’s by far the scariest guy in the district for us to deal with even knowing him,” Rams head coach Mike Porter told Bob Parana of the Ridgway Record and Kane Republican. “He’s got three complete pitches he throws for strikes. We told our guys coming into the game he struck us out 10 times the last game we played. If we limit that to six this time, we win the game.”

Whiteman fanned four and walked three on 89 pitches over his six innings.

The Rams, true to form as they have done all season on the bases, were 9-for-11 in stolen-base attempts off Whiteman and catcher Bobby Rumcik.

In the first inning, the Rams scored without getting a hit. Zimmerman led off and reached on an infield error, stole second and third, and came home on a throwing error by Rumcik.

Then in the third, the Rams pushed home their final three runs. Luke Zimmerman led off with a double, stole third, and scored on Aiden Zimmerman’s groundout. Dom Allegretto singled and after a second out, Whiteman intentionally walked Ethan Wells. A balk by Whiteman pushed runners up to second and third and Dalton Stahli singled both in for the 4-0 lead.

The four-run lead was more than enough for the starter Watts. He allowed three hits and two walks while striking out 10 in six innings. The Wolves scored their run in the sixth when Harley Morris led off with a double and scored on Justin Peterson’s two-out single.

“Gabe’s an athlete,” Porter said. “You’ve seen that on the football field and on the basketball court. He just makes plays. He’s pitching his best baseball when we need him to.”

Watts upped his record to 7-0 and lowered his earned run average to 1.57. He’s given up just three earned runs over the past 41 2/3 innings after giving up seven in his first three outings of the season.

Stahli had three of the Rams’ five hits.

“Both our seniors had huge days today. Dalton had a big day,” Porter said. “He blasted the hit after they intentionally walked Ethan (Wells). That’s clutch. I told Gabe before the game. ‘I watched when you lost in the playoffs in basketball and you don’t want to feel that twice. Let’s go the other way.’ And they did. I’m very happy for them.”

Aiden Zimmerman closed out the win, allowing a hit while striking out two in the seventh.

Kane’s season isn’t over at 13-7. The Wolves will face off against the District 6 runner-up — Southern Huntingdon and Mount Union play Tuesday for the D6 title — for a spot in the state bracket on Wednesday at Stern Field in DuBois starting at 1 p.m.

Wednesday’s winner gets the WPIAL champion — Seton LaSalle and Shenango also play Wednesday in Washington — Monday at a site and time to be announced.

“It’s highly disappointing to lose. I thought our kids played a good game,” Wolves head coach Josh Jekielek said. “Carson pitched well. They made some plays and we left some plays on the field. I thought we hit the ball OK. We just didn’t find a spot for it.