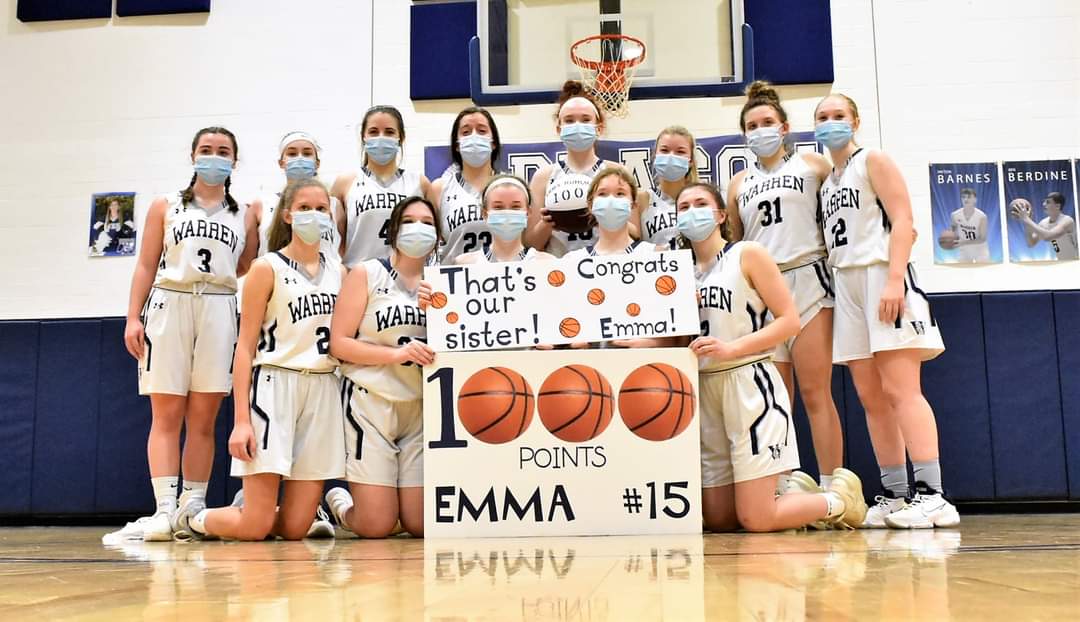 WARREN, Pa. – As a little girl, Emma Ruhlman watched as a number of great players came up through the Warren Lady Dragons’ program under the tutelage of her mother, head coach Lisa LaVan.

On Monday, Ruhlman officially etched her name among some of the all-time Lady Dragon greats, reaching the 1,000-point milestone in a 59-18 victory over Oil City.

She needed 16 points coming into the game and eclipsed that with a free-throw line jumper late in the second quarter.

She got to share the moment with her teammates, which include her younger sisters, sophomore Gracie, and freshman Sammie.

It was part of a dominant performance in the regular-season finale for the Lady Dragons (19-3), who put their foot on the gas pedal against the visiting Oilers.

Ruhlman becomes the first player to eclipse 1,000 points for the Lady Dragons since Margo Loutzenhiser, who like Ruhlman, also accomplished the feat late in her junior season.

She reflected on reaching the milestone afterward:

And Ruhlman might not be the last Lady Dragon to join the club this season, as classmate Riley Childress currently sits at 934 career points heading into the postseason.

Ruhlman and Childress played their freshmen seasons with Loutzenhiser, winning a District 10 title.

Ruhlman and Childress were dominant, scoring 20 and 18 points respectively, with 32 of those 38 points coming in the first half.

Teagan Paris also had a big game for Warren, finishing with 10 points.

The Lady Dragons will enter the D10 Class 5A playoffs as either the No. 1 or No. 2 seed, with playoff brackets slated to be released Wednesday.

March 1, 2021 D9 Girls’ Hoops: Selfridge Leads Clarion Comeback Win; Lauer Paces Keystone in Win Over Redbank Valley
Union’s Logue Becomes Fifth Golden Damsel Underclassman to 1,000 Points
We use cookies on our website to give you the most relevant experience by remembering your preferences and repeat visits. By clicking “Accept All”, you consent to the use of ALL the cookies. However, you may visit "Cookie Settings" to provide a controlled consent.
Cookie SettingsAccept All
Manage consent