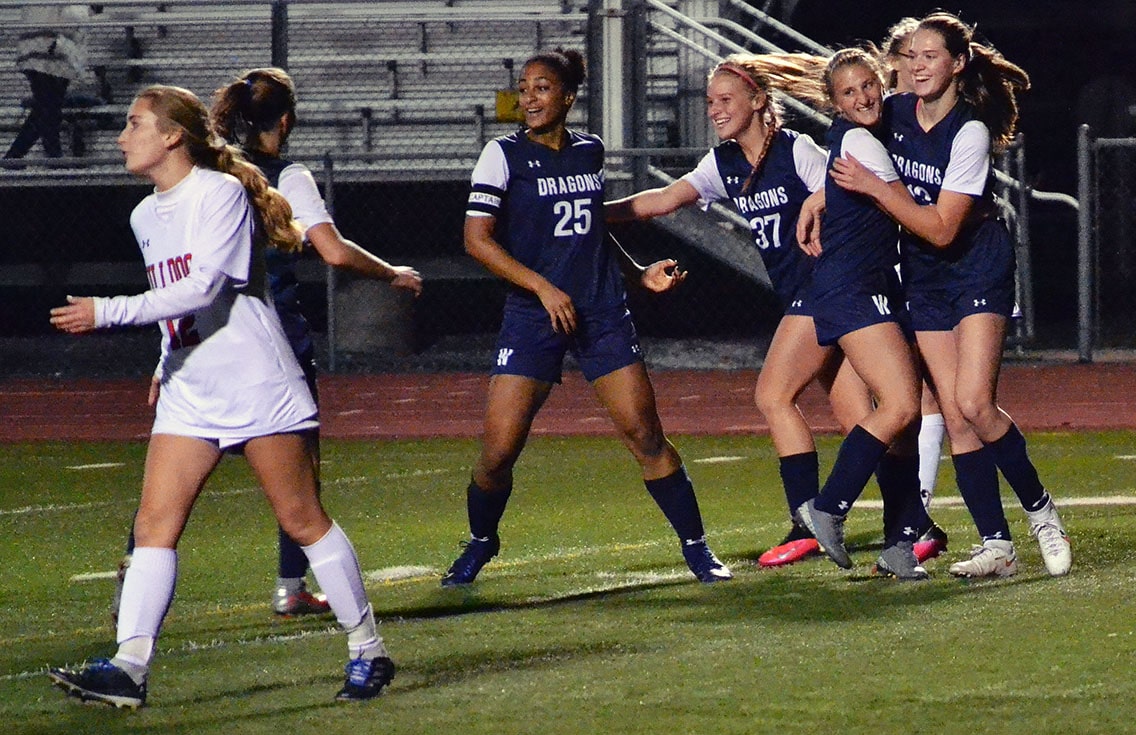 (Photo by Brian Hagberg. Warren players celebrate after Paige Johnson’s first half goal during the District 10 Class 3A championship match against Meadville at War Memorial Field, Wednesday, Nov. 4, 2020. Johnson scored again in the second half and the Dragons topped the Bulldogs, 2-0, to win their second straight D-10 title.)

Paige Johnson scored a pair of goals to propel Warren to a 2-0 win over Meadville and the Dragons’ second straight D-10 title. As has been the norm when the Dragons and Bulldogs square off in the playoffs, it was a hard-fought contest on both sides.

“I expected it to be tough,” Johnson said. “I knew Meadville would be trying their best to come back at us after we beat them twice this season. I knew it would be a tough match but we handled them pretty great.”

After beating the Bulldogs by a combined 15-0 in their two regular season matches, the goals didn’t come as easily in Wednesday’s match.

“It wasn’t the cleanest game we’ve played all season,” Warren coach Jeremy Bickling said. “But when you play a team three times in one season you get real familiar with one another.”

Warren scored its first goal seven minutes into the match, then got an insurance goal with just over five minutes to play in the second half.

“You can tell we were much improved,” Meadville coach Jim Miller said. “We shifted personnel to where it needed to be. “I had a veteran player, Pheobe Templin, who went back there (on defense) tonight and wreaked all kinds of havoc.”

Warren controlled possession early and converted 7:14 into the first half.

The Dragons got the ball to center and Kyra Wotorson sent a pass to Johnson. Johnson got behind the defense and put the ball past keeper Riley Olson for the 1-0 lead.

Warren was able to control possession for most of the first half, and Johnson narrowly missed getting her second of the match five minutes after netting the first. But the Bulldogs defense kept it a 1-goal game going into the half.

“They switched things up tonight to try to attack some things they saw Saturday,” Bickling said. “It was successful to some degree, but our team came out and just played their hearts out.”

Johnson got her third quality scoring chance of the match less than three minutes into the second half. She got the ball just left of center and fired a rising shot. The ball went just over the crossbar.

Warren, who had outscored opponents 140-1 coming into the match, continued to generate chances as the half ticked under 20 minutes.

In one sequence, Wotorson and Johnson each had clear looks, but Olson came up with the stop each time.

“Riley did a spectacular job in goal,” Miller said. “The shots they had were solid. There were no mistakes on her part. She held on for us.”

The Dragons got a corner kick. Georgie Bickling took the corner and fired it to center. The ball bounced off a couple players and found its way to Johnson. Johnson collected it and fired a shot far post, past and outstretched Olson and in for the final tally.

“Eventually it landed on the ground and I simply hit it,” Johnson said. “It (seeing the goal) was unreal, unbelievable. I couldn’t process it.”

“I think for most of the game, I didn’t have the stress that we were ever in jeopardy,” Bickling said. “You don’t like a 1-goal lead, or a 2-goal lead against a competitive team like Meadville. But they weren’t giving up anything that was too threatening.”

With the D-10 title in hand, the Dragons now turn their attention to the PIAA State Tournament. Warren will open play Saturday against District 9 champion Bradford.

“They’re a good team, they’ve got good coaching and they’ve got quality players,” Bickling said. “It’s something we’re going to have to play a lot cleaner game than we played today. They’re a talented team. It’ll be a great matchup for us and hopefully, a good prep for playing in the states.”