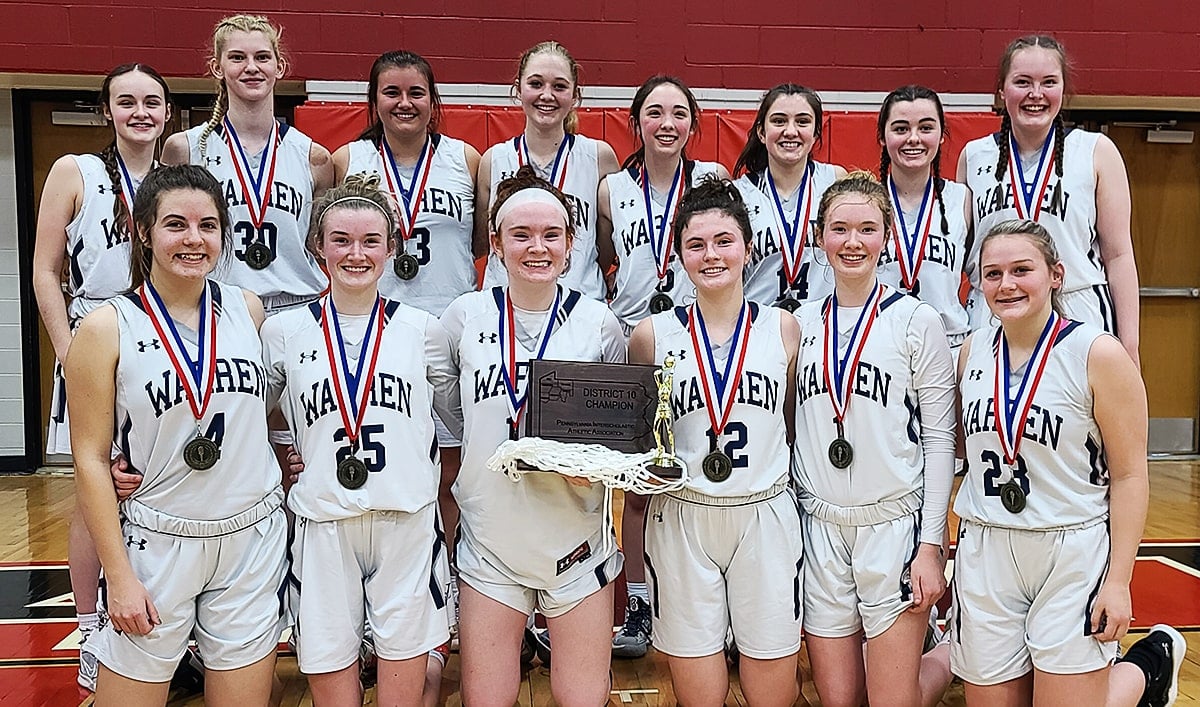 After battling Slippery Rock to the final buzzer, literally, a year ago, Warren led for all but a minute in a dominating 46-34 victory over the Rockets as the Dragons claimed their second straight District 10 Class 5A championship Saturday.

“It’s really come full circle,” Emma Ruhlman said. “We won our first one here (in Meadville) when we were little freshies and now we led our team and won it again.”

Not just the second straight title for the Dragons, but the third in four years and fourth overall for the program.

It took 40 seconds for Warren to take a 2-0 lead, then Slippery Rock’s Gianna Bedel hit a three to give the Rockets a 3-2 advantage. Twenty-six seconds later, Childress gave the Dragons a 4-3 lead.

Warren wouldn’t relinquish it for the rest of the game.

Childress followed by knocking down the first of her two first-half 3-pointers, then Sammie Ruhlman hit from distance to put the Dragons up 11-4. Katie Book answered with a three of her own to keep the Rockets in striking distance as Warren led 13-9 at the end of the first quarter.

“I think that calmed their nerves a little bit and got our offense going,” LaVan said. “People obviously are going to key in on Emma and Riley but we showed tonight that we’re a total package, everybody stepped up, all six kids that got in and really stepped it up for our team.”

The Dragons limited the Rockets to just three field goals in the second quarter while scoring 14 points themselves to take a 27-15 lead into the locker room.

Slippery Rock was able to trim the lead to eight at one point in the third quarter, but Warren responded to push the advantage back to double-digits.

The second half saw a complete 180 in the Warren offensive game plan. The Dragons tried to push the tempo and create transition points through most of the first half, in the second half, it was all about running the half-court offense.

“We were going to transition all game, but then we (got the lead) and just pulled it out and ran the clock,” Childress said.

More succinctly, the Dragons put on a ball-handling clinic. Warren maintained possession for nearly all of the final two minutes of the third quarter and still held a 12-point edge, 35-23, going into the fourth.

On nearly every fourth-quarter possession, Warren ran 30-35 seconds off the clock before a change of possession (score, foul, or turnover). The strategy allowed the Dragons to maintain the lead without giving extra opportunities to the Rockets to go on a late run.

“We did a great job of just taking care of the ball and taking care of the tempo,” LaVan said. “I’m sure there’s a lot of tweets out there that PA needs a shot clock after what we just did, but that’s alright, do what you gotta do.”

Julia Coffaro hit a late 3-pointer to keep the final margin at 12 points.

Childress had a game-high 15 points. Alana Stuart had 10 points, and Emma Ruhlman finished with a double-double with 10 points and 11 rebounds.

Warren will face Oakland Catholic in the first round of the PIAA State tournament on Wednesday at a site and time to be announced. Slippery Rock will have a first round matchup against Moon.

CLASS 5A CONSOLATION GAME
HARBOR CREEK 36, GROVE CITY 25
MEADVILLE, Pa. – Harbor Creek outscored Grove City 9-3 in the second quarter, then held off the Eagles for a 36-25 win in the District 10 Class 5A consolation game.

The Huskies led by just four at the end of the first quarter, 11-7, but held the Eagles to a single field goal in the second (a Hannah Reiber 3-pointer).

Both teams had opportunities to either break the game open or climb back in it, but neither was able to consistently finish at the rim to take advantage of the opportunity.

Samantha Zank had a game-high 17 points for the Huskies while Elise Benim added 13.

Harbor Creek advances to the PIAA state tournament where the Huskies will face Chartiers Valley (who was upset in the WPIAL championship by South Fayette) on Wednesday at a site and time to be determined.

ECC Girls Get Defensive in Winning First D10 Title Since 2010 in Beating O-E in 1A; NC, DCC Win Consy Games
ECC Boys Win 24th D9 Title Under Straub but First Title for Many of the Players; O-E, Jburg Win Consy Games
This website or its third-party tools process personal data.In case of sale of your personal information, you may opt out by using the link Do not sell my personal information.
×
Manage consent