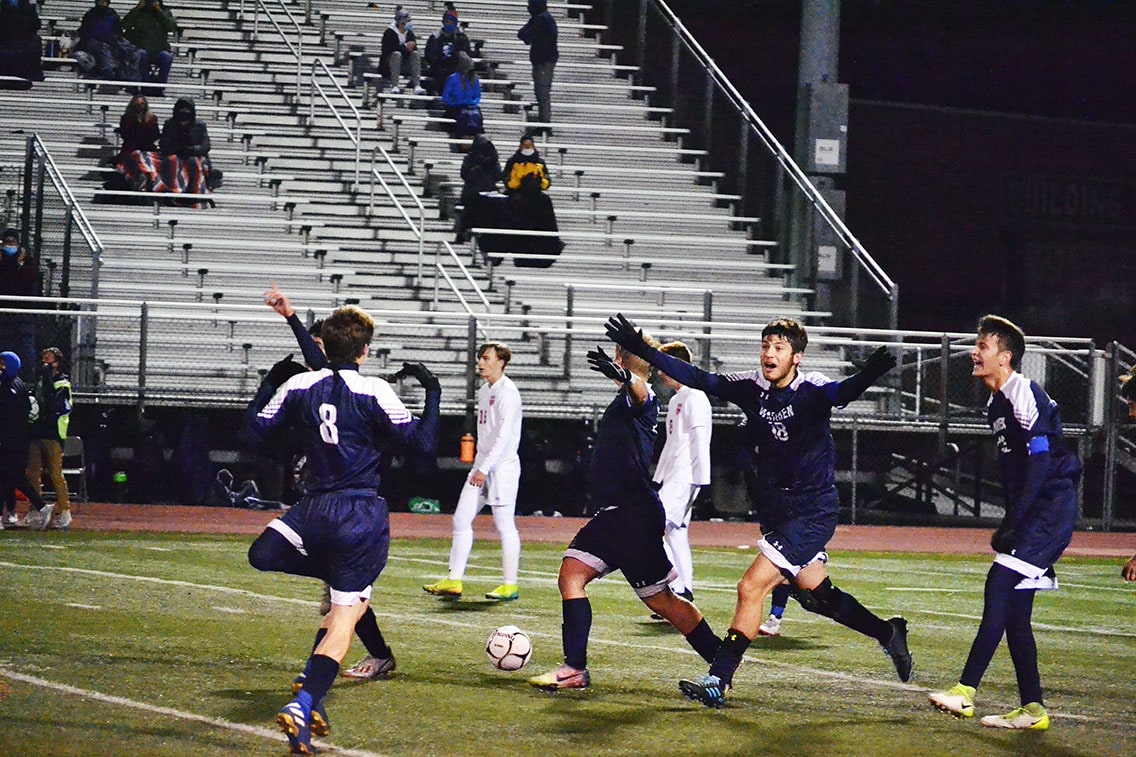 (Photo by Brian Hagberg. Warren players celebrate after Parks Ordiway’s second half goal gave them a 2-0 lead over General McLane in their District 10 Class 3A semifinal at War Memorial Field Tuesday, Nov. 3, 2020. The Dragons advanced to Thursday’s District 10 title match with the win.)

That defense, along with keeper Alex Ferry, proved their coaches right Tuesday as they helped lead the Dragons to the District 10 title match with a 2-0 win over General McLane at War Memorial Field.

“It was a great team effort, but the defense came through,” Flatt said.

“We can list each player, but we team defend,” Darling said. “We defended as a team. Our defense stepped up and played a really nice match.”

The Lancers tested the defense from the opening kick as they controlled possession for most of the first 25 minutes of the first half. McLane had multiple quality chances, including corner kicks, but Ferry was up to the task on all of them.

“We expected them to go hard in the beginning,” Ferry said. “We knew they would be a really tough opponent and if we survived that onslaught at the beginning we could probably win the game.”

The Dragons got their first quality scoring chance with just under 14 minutes to play in the half. Warren had a corner kick and the loose ball found its way to Jack Darling. He ripped a twisting shot from the middle, but the ball sailed just wide to keep the match scoreless.

Warren broke through in the 36th minute. Ian Darling got the ball on a turnover and sent a lead pass up the middle. JT Blum narrowly beat Lancers keeper Isaac Mroz to the ball and punched it in for the 1-0 lead.

GM nearly tied it 90 seconds later, but the shot trickled wide and the Dragons held the 1-0 lead at the half.

The second half played out much the same as the first, with the Lancers controlling play early and creating quality scoring chances.

With nine minutes to play, RJ Benedict fired a shot from 10 yards at center. Ferry was able to make the save to preserve the 1-0 advantage.

“There were a couple shots where I thought ‘That’s it, 1-1.’ And he made the save,” Chris Darling said. “I’m really proud of his growth this year. He was tested tonight and he responded really well.”

The Dragons got an insurance goal with two minutes left.

John Page ran down a loose ball on the sideline and sent a pass to Parks Ordiway. Ordiway was initially denied a shot and opted to pass back to Page.

That pass drew Mroz to the far post and opened space. Page sent a crossing pass back to Ordiway who had space and buried the shot.

Warren’s defense held and got the final clear with five seconds left to send the Dragons to the District 10 title match.

Ferry had 16 saves for the shutout.

“He had the game of his life,” Flatt said.

The Dragons will host Cathedral Prep in the District 10 Class 3A Championship Thursday at War Memorial Field.

“Prep is a different animal,” Flatt said. “But we’re going to come out, we’re going to play Warren soccer and do the best we possibly can. I have confidence in our team. We can play with any team.”

Nov. 3, 2020 Playoff/Regular Season Volleyball Scores
Corry, Maplewood, Saegertown, Fort LeBoeuf, Conneaut Volleyball Advance to D10 Title Matches
This website or its third-party tools process personal data.In case of sale of your personal information, you may opt out by using the link Do not sell my personal information.
×
Manage consent