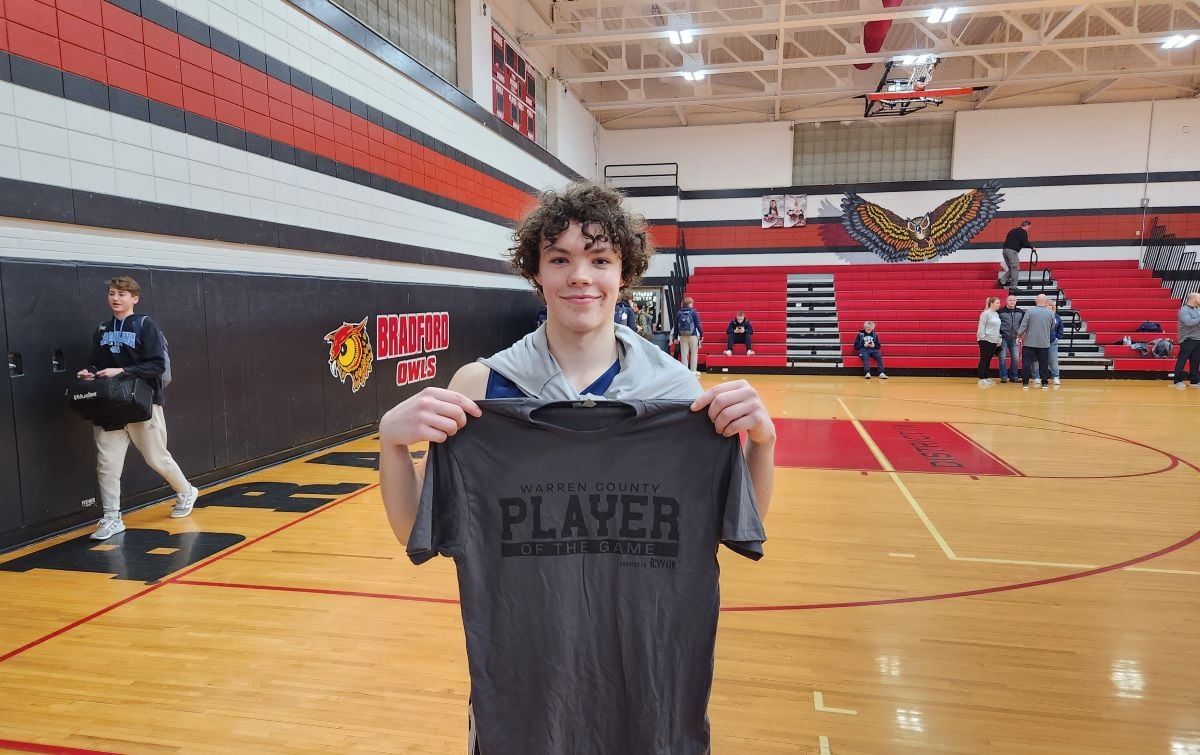 BRADFORD, Pa. – Owen Becker and Braylon Barnes combined for 45 points as Warren beat Bradford for the second time this season, 70-50.

“Our energy was great on offense, which pushed us,” Barnes said. “Our defense wasn’t great. But mental mistakes are going to happen when you haven’t played in a while (the Dragons’ last game was Dec. 30).”

Bradford actually led early, 11-6, but Warren scored 17 points over the final four-plus minutes of the first quarter, including eight from Barnes to take a 23-16 lead.

Becker finished with 23 points and Barnes 22, while Tommy Nyquist scored 12 of his 14 points in the first half.

“As a group, we play well together,” Barnes said. “Tommy is a great point guard.”

Jake Franz led the way for Bradford with 22 points, including 9-of-10 from the free throw line, while Chase Wineberg added nine points.

ELLWOOD CITY, Pa. – Slippery Rock built a 35-8 halftime lead on its way to an impressive 64-22 win over Ellwood City of the WPIAL.

Ellwood City was playing without senior standout Joesph Roth, who missed the game due to an ankle sprain.

John Sabo and Levi Prementine chipped in eight and seven points respectively for the Rockets.

Fagley netted a team-best 16 points with Dye chipping in 14.

Also for the Sailors, Cam Pence and Evan Reiser each had nine points.

UNION CITY, Pa. – Lindsey Greco scored 12 of her 19 points in the second half as Saegertown earned a 44-41 win over Union City.

Hailee Gregor had 15 points in the win for Saegertown.

Brooke VanTassel had 17 points for Union City and Cathryn Reynolds had nine.

Sydney Zillhaver also had 14 rebounds for the Blue Devils.

Brady also had eight rebounds, four assists, and four steals, while Lainie Harrington had eight points, six rebounds, and a pair of assists.

Ella Gallo had 13 points for Cochranton and Eve Pfeiffer nine.

WATERFORD, Pa. – Fairview went on a 22-4 run in the first quarter and never looked back in a 59-23 Region 4 win over Fort LeBoeuf.

Bre Heidt led a balanced effort with 15 points for Fairview, while Sara Gennuso and Addy Greene added seven points each.

Wilmington led 29-19 at halftime en route to the win.

Reese Bruckner was also in double figures for Wilmington with 12 points.

Monique Vincent and Bella Magestro added 13 points each in the win for Kennedy Catholic.

Emma Marsteller scored 12 of her 19 points in the second half to pace Lakeview.

Kimora Roberts had four points for Hickory, which scored all nine of its points in the first half.

GIRARD, Pa. – Mackenzie Dunn led a trio of Eisenhower players in double figures with 20 points as the Knights picked up a Region 3 win, 63-37, at Girard.

Eisenhower led 28-20 at the half, then outscored Girard 37-17 in the second half. Dunn was even with 10 points in each half.

Clara Steinberg finished with 12 points and Samantha Childs had 11, thanks in part to three 3-pointers.

Bella Marino and Laney Belcher each added seven points for the Knights.

Lily Polk had 16 points, and Peyton Kalicky had 14 for the Yellowjackets.

Madison O’Hara, Alannah Kelley, and Madison Eimer had six points each for Maplewood.

McBride was one of four Ramblers in double figures, as Tori Mayes and Addie Biel had 12 points each and Ava Lucarotti 10.

Mild had 17 points and Stephens 15, while Alexa Babock added seven for West Middlesex, which led 24-6 at halftime.

Taylor Keener had 14 points for Jamestown.

Julia Coffaro had 11 points and CJ Sabo 10 for Slippery Rock.

Shannon Stevenson was also in double figures for the Lakers with 11 points.

Audrenna Nivens had 12 points for Erie.

Watch Live: Warren at Bradford Boys Basketball
Albright Helps Keystone Boys Rally Past ACV; Karns City Rallies to Beat DuBois Behind Beighley; Clearfield Gets Win
This website or its third-party tools process personal data.In case of sale of your personal information, you may opt out by using the link Do not sell my personal information.
×
Manage consent