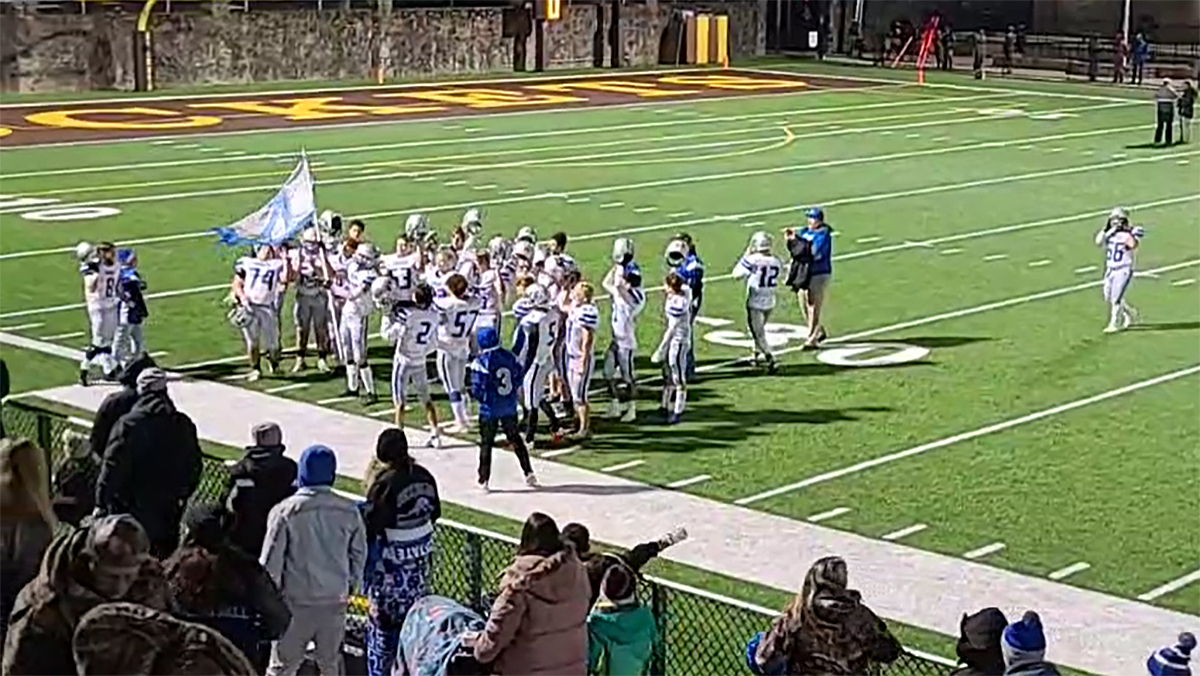 TITUSVILLE, Pa. – Reynolds running back Jalen Wagner scored six total touchdowns to lead the Raiders to a 56-27 win over Eisenhower in their District 10 Class 1A semifinal Friday.

“(The) line was making great blocks,” Wagner said. “The play we were running was a counter and the hole just opened up for me every time. It was wide open, so I was running to the end zone every time.”

Reynolds (6-4) had to rely on its defense early in the game. Eisenhower (7-3) took the opening possession all the way down inside the Raiders’ 5-yard-line, but couldn’t punch it in. The Knights lined up to attempt a field goal, but a bad snap-something that plagued Eisenhower all game-gave Reynolds the ball on its own 14.

Wagner took the handoff on the next play, found a hole and was off to the races for an 86-yard score and a 6-0 Reynolds lead.

Eisenhower again marched all the way down inside the Reynolds 5, but the Raiders held thanks to a pass break-up on fourth down.

The third time was the charm for the Knights as Shawn Pazcuzzi took a quarterback sneak four yards on a 3rd-and-1 to knot the game at 6-6.

Reynolds wasted little time marching right back down the field and Clayton Rhoades finished the drive with a 34-yard TD run. Bryce McCloskey ran in the conversion to make it 14-6.

The Raiders recovered the ball on a bad snap with just under two minutes to play in the first half and ended the half with a 19-yard field goal from Juan Esteban Riana to take a 17-6 lead at halftime.

Reynolds received the kick to start the second half and on the second play from scrimmage, Wagner raced 51 yards to paydirt to extend the lead to 23-6.

The Raiders forced a punt on the ensuing Eisenhower possession, then took over at the Knights’ 24 after the snap on the punt went over Benji Bauer’s head. Penalties had the Raiders facing a 3rd-and-21 from the Eisenhower 35. McCloskey found Wagner open down the left side for a 35-yard touchdown and a 29-6 advantage.

Eisenhower marched down the field but looked like it might be turned away again facing a 4th-and-4 from the Reynolds 18. Pascuzzi flipped a pass out to the right sideline. Wyatt Lookenhouse brought it in right at the sideline, juked past one defender then spun away from another to get into the end zone and cut the lead to 29-14.

The Raiders needed just one play to respond. Following the kickoff, Haydin McLaughlin took the ball off left tackle, found the sideline and sprinted 57 yards to extend the Reynolds lead to 36-14.

Eisenhower drove down inside the Reynolds 10, but an apparent miscommunication between quarterback and receiver led to a Gavin Alabran interception of Pascuzzi’s pass and the Raiders taking possession.

Two plays later, Wagner was at it again. He took the handoff and ran right up the middle for an 85-yard touchdown.

Reynolds forced another punt and a high snap led to a rushed kick that didn’t make it back to the line of scrimmage. The Raiders took over on the Knights’ 34 and three plays later Wagner went right up the middle again for a 32-yard score and a 49-14 lead.

Pascuzzi took a shot downfield on third down from near midfield. A defender tipped the ball away from the intended target, but the tipped ball landed right in Derek Childs’ bread basket and he raced into the end zone for a 49-yard touchdown.

Wagner got those points right back on the next play from scrimmage. He took a handoff and had a big hole on the left side. Wagner ran into traffic, but broke through the tackle and finished the 63-yard touchdown run to cap his day.

Bauer scored from four yards out on the final play of the game for the final margin.

The Raiders finished with 538 total yards, 434 of those were rushing yards.

Bauer and Lookenhouse were each over 150 yards for the Knights. Bauer had 31 carries for 151 yards and a score, while Lookenhouse had eight catches for 152 yards and a TD.

Reynolds will take on Cochranton, a 14-12 winner over Maplewood, for the District 10 Class 1A championship at a time, date and location to be announced.

Port Allegany Stops Late Keystone 2-Point Play to Move into D9 1A Semifinals; Union/ACV Advances; DuBois Falls
Rushing into Semifinals: Smethport has 3 100-yard Rushers in D9 1A Quarterfinal Win over Curwensville
We use cookies on our website to give you the most relevant experience by remembering your preferences and repeat visits. By clicking “Accept All”, you consent to the use of ALL the cookies. However, you may visit "Cookie Settings" to provide a controlled consent.
Cookie SettingsAccept All
Manage consent