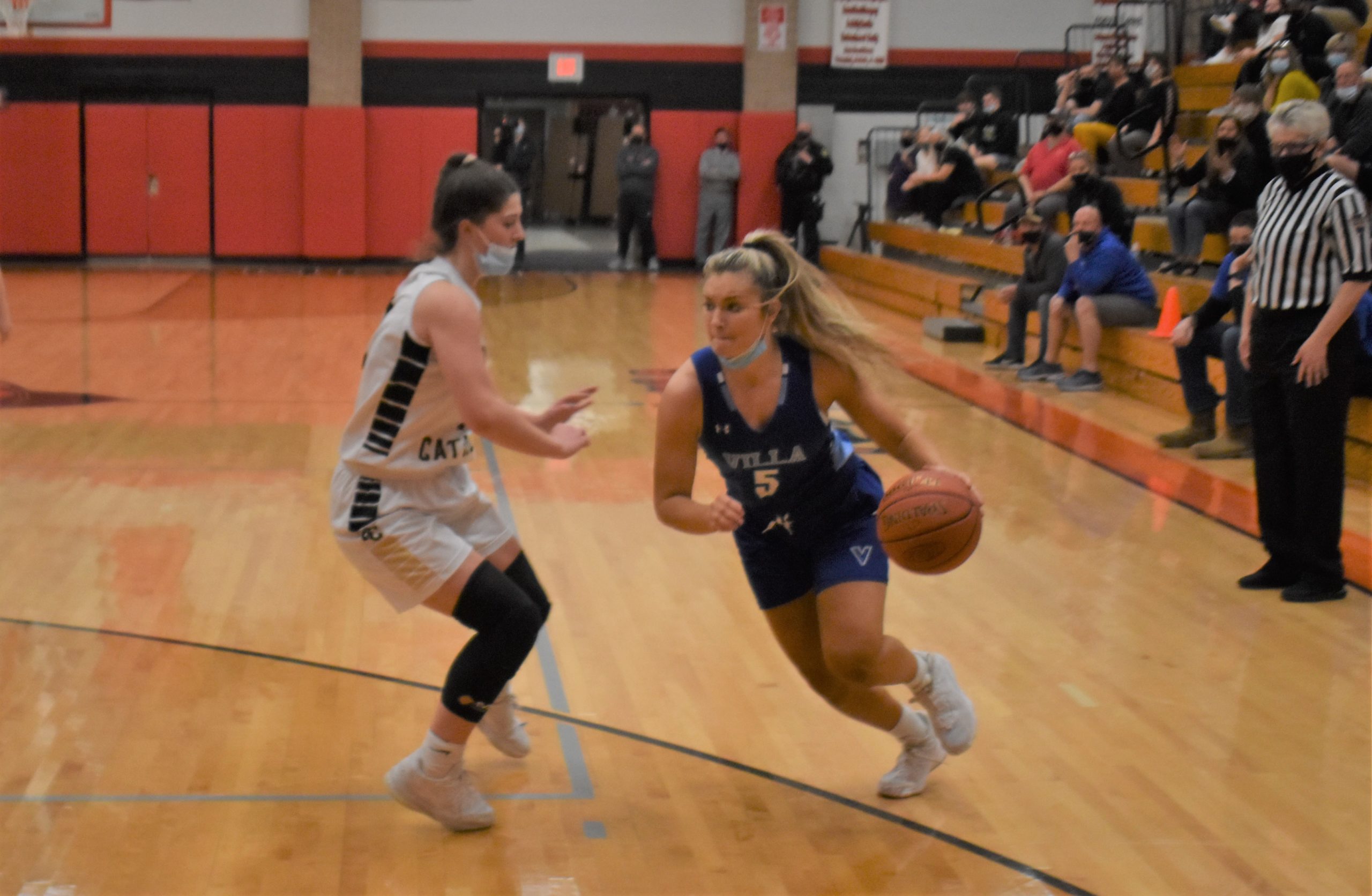 For the 10th time in program history, the Villa Maria Victors are headed to the PIAA state finals in Hershey.

They punched their ticket on Tuesday with a 47-39 wire-to-wire win over Delone Catholic in the Class 4A semifinals at Central Cambria High School.

“This is one of the greatest feelings I could ever imagine,” said Villa senior Rachel Majewski. “We’ve worked so hard these past few days and we just wanted to come out strong and keep our composure for the entire game.”

This will be Villa’s first state title game appearance since 2017, with their last title coming in 2011.

The Victors, after grinding out a 29-28 overtime win over Beaver in the quarterfinals, never relinquished the lead against the Squires, but that lead also never got bigger than single digits until midway through the fourth quarter, and even then, Delone made a run.

An Ava Waid layup gave the Victors (20-0) a 41-30 advantage with four minutes remaining, but the Squires didn’t go down without a serious fight.

Villa’s Ainsley Thunell looks to go up for a shot while being defended by Delone Catholic’s Makenna Mummert.

Giana Hoddinott and Abigail Vingson drilled back-to-back 3s to make it 41-36 with three minutes to go, and the pressure was back on the Victors.

They responded in a big way, as Carissa Dunham went 4-for-4 from the free-throw line down the stretch and Waid sank a pair at the end to put the game on ice.

“We practice free throws a lot in practice and really just want to be able to step up and take the big moments for our team,” Dunham said. “That’s just what our team needed from us today.”

The Victors, after blowing out most of their opponents this season (they’ve won 16 games by at least 20 points) have faced some real pressure in the last two games, and they’ve responded like champions do.

“These girls deserved a chance like they did this year,” Chuzie said. “When COVID hit, you try and talk them through it and I think they actually talked me through it.”

Majewski and Dunham both hit 3s in the opening quarter and a pair of buckets from Sydney Pearson made it 12-3, prompting a Squires’ timeout.

It was part of the quick start they were hoping for, but Delone was never really out of it, thanks in large part to a full-court press that was able to force the Victors into some turnovers.

They never gave up the lead, however.

The margin got down to four in the second quarter, but old-school 3-point plays from Majewski and Jayden McBride got it back to eight.

Back came the Squires, as Hoddinott and Makenna Mummert connected on buckets in the final minute to make it 25-21 at the half.

The Victors made adjustments at halftime, and came out and handled the press almost flawlessly.

“At halftime, we just wanted to keep our composure and focus on breaking it and stay calm,” Majewski said.

It also helps to have a senior point guard like Waid.

“Ava is a 4-year player, I believe that was her 99th game as a Villa varsity basketball player,” noted Chuzie. “I’d like to see if that’s a record. Her teammates trust in her, her teammates believe in her and her teammates love her. She’s a great teammate and a great friend.

“As a coach, having her on the floor for four years, it doesn’t get any better than that.”

An Ainsley Thunell layup extended the lead to seven in the third, and just when it looked like the Squires were going to go on a run, Villa, like they did all game, responded courtesy of a bucket from the freshman McBride to close the quarter.

Waid led a balanced Villa effort with 10 points, while Majewski, Dunham, and McBride added nine each.

Hoddinott had 16 and Mummert 13 for Delone Catholic.

Overall it was an impressive effort from a team and a program that is used to playing on the biggest of stages, and they will get that opportunity on Saturday at Hershey’s Giant Center (12 p.m.) against Archbishop Wood, a 56-39 winner over Scranton Prep in the other semifinal.

“We’re going to need to recover,” Chuzie said. “Those were two very difficult games in a row. We’re going to enjoy this tonight and we’ll start getting ready for what we can do on Saturday. They’re one of the best teams in the state of Pennsylvania and quite frankly are a nationally ranked team. We’re very excited.”