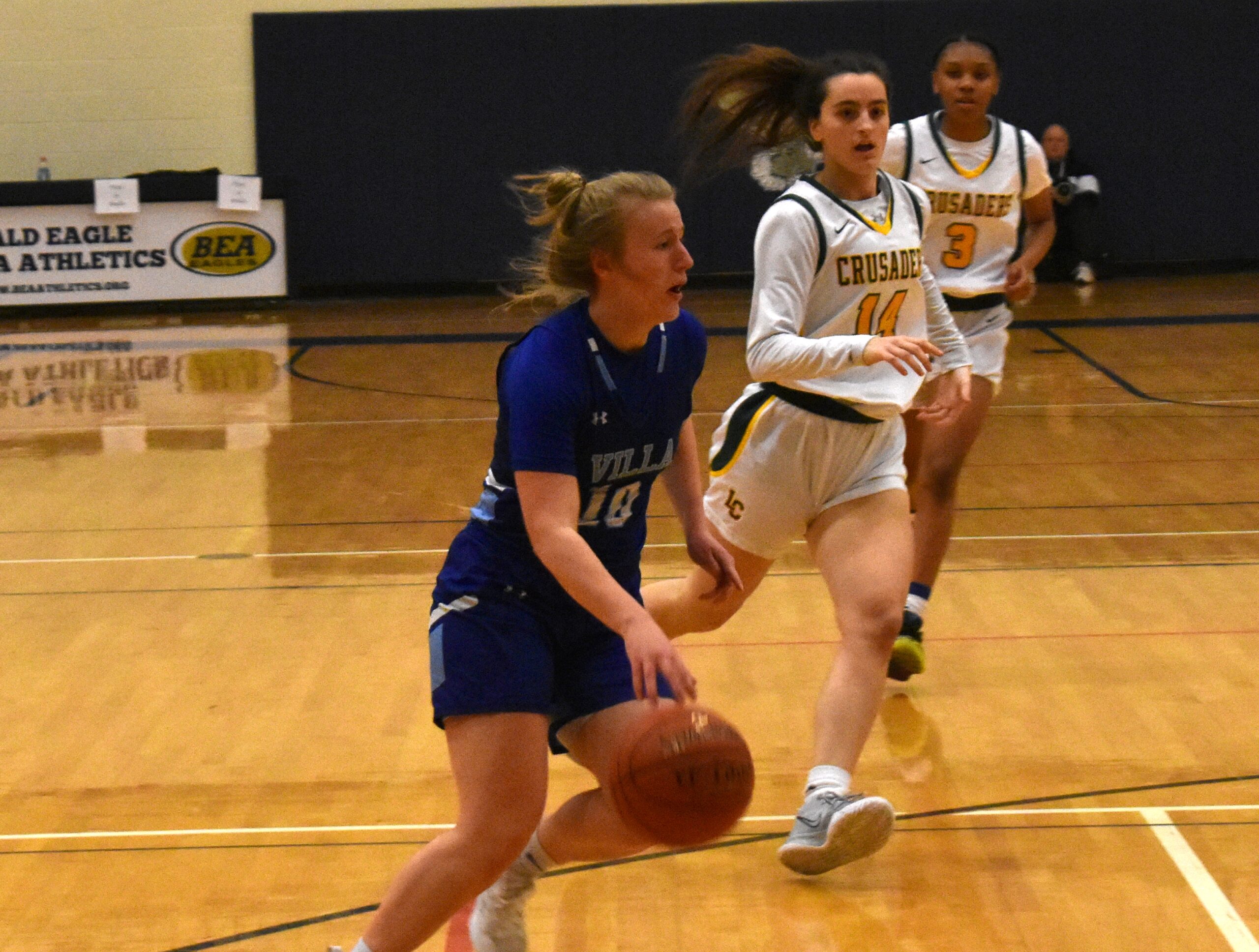 The Victors’ (24-3) season did indeed come to an end in a 56-50 thriller against Lansdale Catholic in the PIAA Class 4A semifinals at Bellefonte High School.

It was a game the Victors led for large stretches, but the Crusaders (19-7) knocked down some big shots late to come out on top.

“Sometimes you can do everything right, preseason, during the season, postseason, you can play well, but some days the other team plays a little better than you do,” Chuzie said. “Sometimes the ball doesn’t bounce your way. Credit to them. They got looks and knocked them down. I don’t think they were easy, we had hands in their faces. They play in a very difficult league and they’re accustomed to the big game.”

Chuzie was referring to the Philadelphia Catholic League, where the Crusaders play. Lansdale was knocked off by Neumann-Goretti on Feb. 17, but has since rattled off four-straight wins to reach the state championship game.

Villa led by as many as seven in the second half, 35-28 at the two-minute mark of the third quarter on a McKenna Valone.

The Crusaders, led by Division I prospect Gabby Casey, battled back, however, retaking the lead on a Casey drive, 45-43 with 3:05 to go in the fourth quarter.

A Vallone jumper tied the game back up, which began a wild sequence in which Casey hit a three, which was immediately answered by Walz, which was answered by Olivia Boccella all in the span of 39 seconds to make it 51-48 Crusaders with 2:11 to go.

Lansdale Catholic was finally able to muster a stop on the ensuing possession and Sanyiah Littlejohn and Casey went 4-of-4 from the free-throw line, both hitting front ends of a 1-and-1 to hold the Victors at bay.

“That’s why we’re all here to get to this position and have a shot,” Chuzie said. “I thought there were two teams that put on a heck of a show today and I couldn’t be more proud of the way the kids played today and all season long.”

It was the Carissa Dunham show early for Villa, as the senior scored all 14 of her points in the first half, which included four made three’s.

“It has been the craziest four years of my life,” Dunham said. “Had some good moments, had some bad, but if you would have said we’d be back in the Final Four after losing five seniors, the whole state of Pennsylvania probably would have laughed in your face, so that was amazing.”

The two teams traded jabs for much of the first half, with a Dunham three giving Villa its biggest lead of the game, 25-17 with 50 seconds to go in the half, but Edwards and Boccella went 3-of-4 from the free-throw line to close out the half to get the Crusaders back within five.

Lansdale opened the second half on a 6-0 run to take a 26-25 lead, but Villa responded with a run of its own on a pair of Jayden McBride three’s and a Daniela Shaugnessy free throw.

“It’s been such a great journey,” Shaughnessy said. “We all pulled together these last few months. It’s been so rewarding. We accomplished so much this year.”

McBride finished with 13 points for Villa, while Shaugnessy and Walz had nine each.

Dunham will continue her career next year at Division I Mount St. Marys, while Shaughnessy will be playing at Division II IUP.

Casey had 23 for the Crusaders and Boccella 15.

Lansdale Catholic will meet Philly Catholic league foe, Archbishop Wood, for the PIAA championship on Thursday after Wood earned a 57-44 win over Jim Thorpe in the other semifinal game.

This marked the final year for Villa under their current name, as they will combine with Cathedral Prep next season, taking the Prep name, mascot and colors.

And it was a special season for all involved.

March 19, 2022 PIAA Basketball Scores (All Games) Powered by Janney Montgomery Scott in Clarion
Behind DiMichele’s 39, OLSH Rallies Past Kennedy Catholic in OT in PIAA 2A Semifinals
This website or its third-party tools process personal data.In case of sale of your personal information, you may opt out by using the link Do not sell my personal information.
×
Manage consent