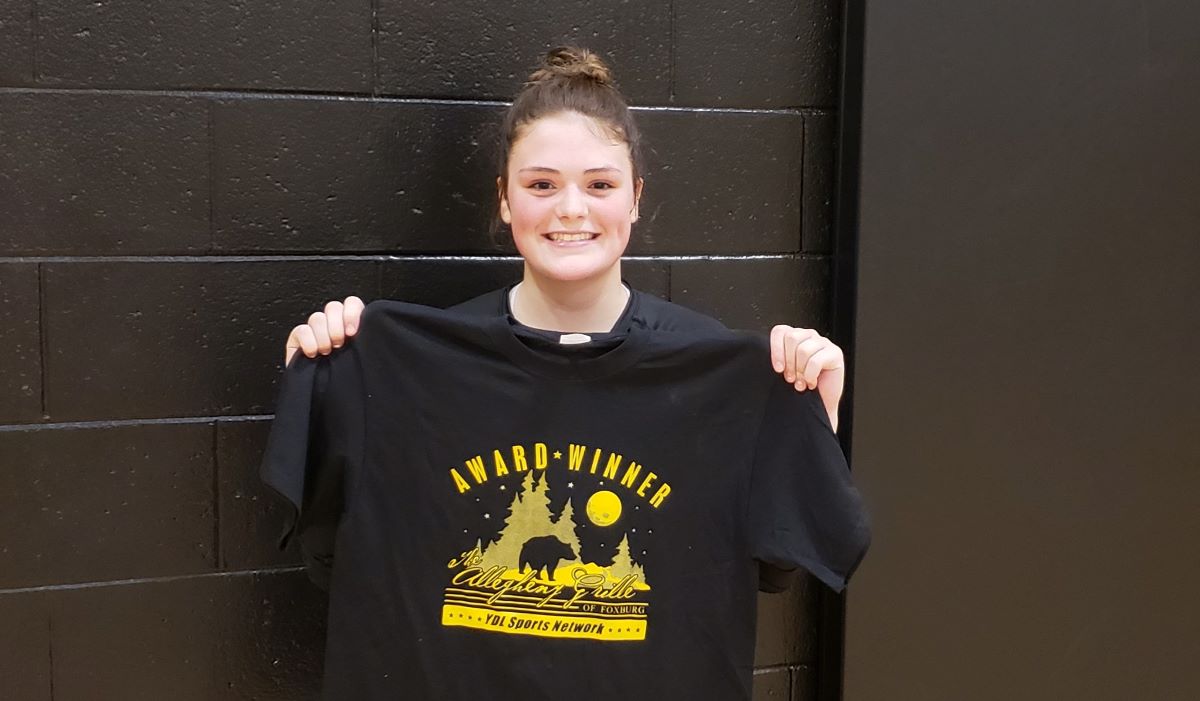 Bailey Varndell helped lead Maplewood past ECC Tuesday and into the second round of the PIAA 1A playoffs. Photo by Chris Rossetti

Varndell had eight kills, four aces, and 24 set assists and was named the Allegheny Grille of Foxburg Player of the Game.

“It feels really good (to move on),” Varndell said. “I am very proud of my team. It is a confidence booster. It is really exciting.”

Varndell, who is usually setting up others for points, found herself scoring for the Tigers after being able to exploit a hole in the ECC defense.

“They played a really wide defense,” Varndell said. “Their right back and their left back, they played pretty wide. The middle of the court was pretty open. I can just see from my peripheral vision. It was easy for me to see the court tonight.”

It wasn’t by accident that Varndell could see the positioning of the ECC defenders.

“We scouted them a little bit,” Maplewood head coach Sheila Bancroft said. “We knew what was available. (Bailey) is smart. She has been playing the game for a long time. So, she had the green light tonight. We told her she should come out of this match with some kills.”

Varndell’s play helped Maplewood overcome a bit of a down game from star outside hitter Sadie Thomas. It wasn’t that Thomas didn’t contribute, she did have a team-best 13 kills. But she also seemed off with her hitting most of the night and hit under .100 for the match.

“Sadie was off her game tonight,” Bancroft said. “She’d be the first one to admit that. So when she’s off, other girls did step it up. That was a key. We can’t just rely on Sadie. Yes, she is our big gun. Everyone knows that. But if she’s off, we’ve preached that all year, if someone’s off you have to step up your game.” ”

Elizabeth Hunter was one of those players who stepped to the forefront with seven kills in the match for Maplewood.

“It is really important (to get other players involved),” Varndell said. “It just makes the other team have to guess where I am going to set. It is important to get everyone going in the game.”

Maplewood also got strong defense from McKenna Crawford, who had 17 digs.

“McKenna Crawford played out of her mind on defense,” Bancroft said. “She dug a lot of balls up.”

“This was a great group of girls,” ECC head coach Tricia Bauer said. “This was not how we wanted our season to end. But, overall, it was a great season. I think our hitters did a great job of swinging tonight. But we struggled with our passing at times. It’s going to be hard tomorrow with not being able to get together and work on the game.”

ECC had trouble all night long with ball handling being called for a number of ball-handling errors to the point that a rare yellow card was issued against the Lady Crusaders late in the match.

“We have a few more days of volleyball,” Bancroft said. “We are excited about that. We don’t want this season to end. I think the girls have big goals. Taking one more step into the bracket is huge. You never want your season to end.”

Nov. 8, 2022: Mattera Leads Conneaut into 3A 2nd Round; Kane Loses 2-0 Lead as Season Ends
Oswayo Valley Outlasts Serra Catholic in Five Sets to Advance to PIAA 1A Second Round
This website or its third-party tools process personal data.In case of sale of your personal information, you may opt out by using the link Do not sell my personal information.
×
Manage consent