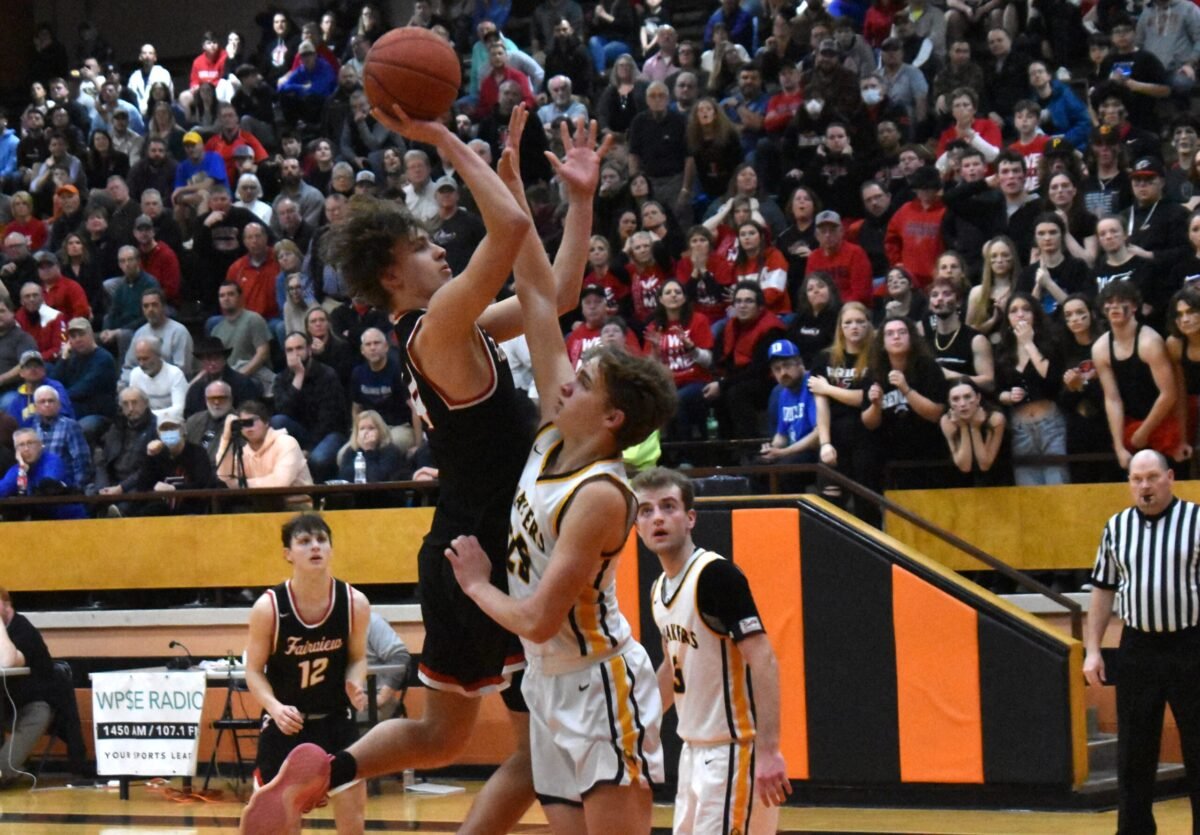 Fairview's Logan Frazao goes up for two of his 11 points during the Tigers' PIAA Class 4A quarterfinal game against Quaker Valley. Photo by Andy Close.

The Tigers trailed by as many as 15 in the first half and 13 in the second half, but came all the way back, with James Sitter tying the game with his third three of the game, 39-39 with 4:50 to play in the fourth quarter.

Quaker Valley had the answer, however, responding with a 7-0 and was able to keep the District 10 champion Tigers at bay to close it out.

“I was just really proud of their effort,” Fairview coach Pat Flaherty said of his team. “I knew they would do that, I knew they wouldn’t quit, but you know we tied it back up and had a chance to go ahead. They really battled. That’s one heck of a team we just played and we were right there.”

That’s when Fairview started to make its move.

Logan Frazao, who was saddled with foul trouble in the first half, scored seven points in what turned out to be a 17-4 run that was capped by Sitter’s three to tie the game.

One of Quaker Valley’s stars, Division I prospect Adou Thiero, got into some foul trouble of his own, picking up his fourth foul during the midst of the Tigers’ spurt.

A drive to the bucket by Frank made it 37-25, but Frazao tallied the final four points of the quarter for Fairview (25-3), including a thunderous putback dunk as time expired to make it 37-29.

That momentum carried over to the fourth, with Tyler Shultz, who scored a team-high 17 points, drawing a jumper to start the quarter, and, after a Frank bucket at the other end, Sitter canned a three to make it 39-34.

“We were able to get on a run,” Flaherty said. “We took some bad shots tonight, but I think that’s just what their length and athleticism cause you to do. We were able to get into a rhythm for that time period and we got the crowd going a little bit.

“But we missed a lot of shots, too. We had some good looks that just didn’t go in. We got on a little bit of a roll and they came back and hit a big three, which kind of took the sails out, but I’m just really, really proud of our guys.”

That three came courtesy of Thiero, who came back into the game after the Tigers made their run. Frank followed with a strong drive to the basket and Thiero another bucket to make it 46-39 with four minutes to play.

But the Tigers battled to the final whistle, getting it back down to a one-possession game with 11.7 seconds to go on a three-point play from Shultz.

Thiero knocked down a pair of free throws, however, to ice the game for the Quakers.

“I thought we played great team defense in the second half,” noted Flaherty. “I thought Frank kind of hurt us. He got to the rim a little bit and he’s a little quicker than maybe we have him credit for, and we knew he was really quick. I thought we did a good job on Adou. We gave up a couple of putbacks, but that’s going to happen against that athleticism and size. Our kids just battled really hard.”

Fairview actually scored the first six points of the game, but Quaker Valley came back to take a 16-13 lead after the first quarter.

After a three from Jeremy Frazao to start the second quarter tied it at 16-all, the Quakers went on a 15-0 run, with Frank scoring 10 points during the surge.

Fairview scored the final four points of the half to cut the deficit to 11, 31-20 on a pair of free throws from Logan Fraao and a bucket from Jeremy Frazao.

Sitter and Logan Frazao finished with 11 points each for Fairview, while Jeremy Frazao added seven.

Quaker Valley advances to play Archbishop Carroll, the No. 5 seed from District 12. They beat WPIAL runner-up Montour, 56-54. That game will be on Friday at a site and time to be determined.

Fairview, meanwhile, was left to reflect on one of the most successful seasons in program history.

“It was incredible,” Flaherty said. “We had a great following, we had a great group of kids, we had great parents. It was just one of those things where we got on the playoff run and it was one of the most enjoyable things that I’ve been a part of in a long time as far as just having fun and enjoying the moment and just being a part of a great team. I’m just really proud of them. It’s one of the best teams I’ve ever coached.”

March 15, 2022 D9/D10 Basketball Scores Powered by Janney Montgomery Scott in Clarion
Breindel, Straub Lead ECC into PIAA Class 1A Semifinals with OT Win Over Union (New Castle)
This website or its third-party tools process personal data.In case of sale of your personal information, you may opt out by using the link Do not sell my personal information.
×
Manage consent