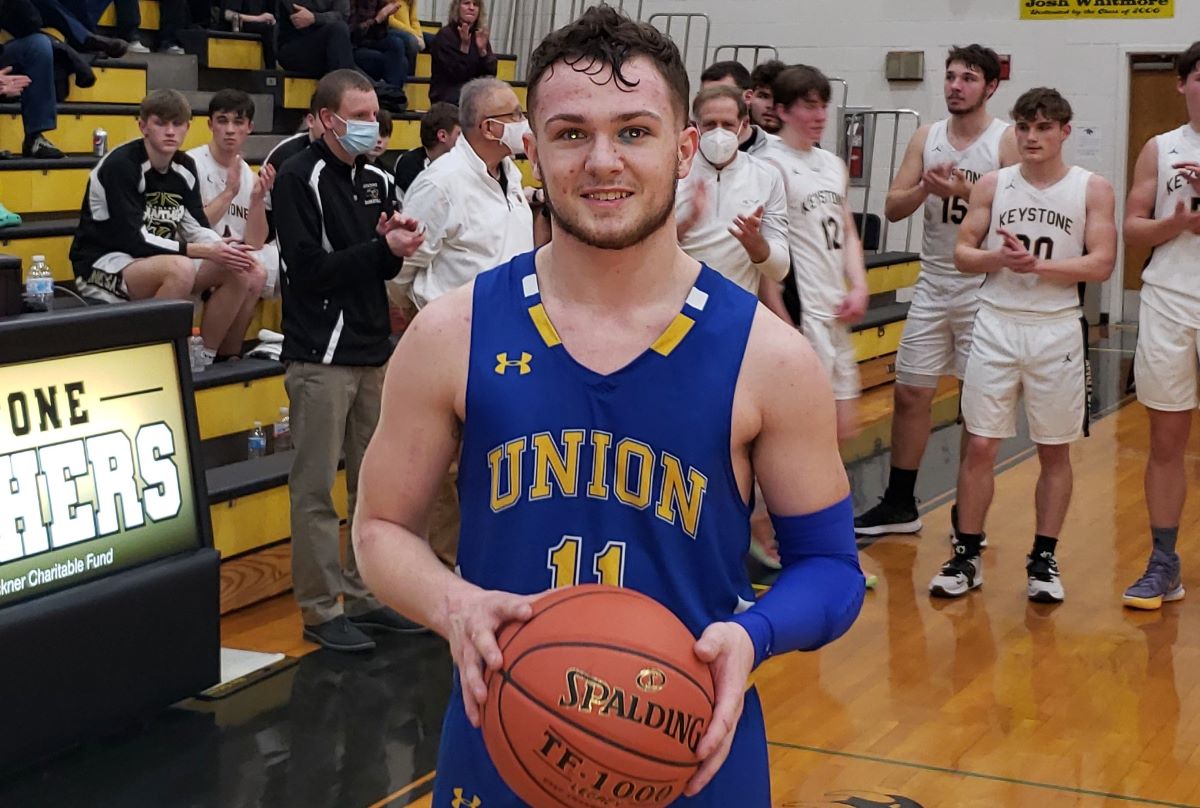 Needing 13 points to get 1,000, Rainey entered the fourth quarter still in need of five but quickly did so scoring six points in the first 1:11 of the quarter.

The milestone came on a driving layup that gave Union a 50-46 lead.

“It’s every kids’ dream to hit that,” Rainey said. “But more importantly, I wanted to win the game, and we didn’t come out with that.”

The game was stopped, and Rainey’s brother, Cole Morris, Union’s third all-time leading scorer with 1,326 career points came out of the stands to present his brother with the game ball.

Morris’ appearance was a shock to Rainey, who thought his brother was still in Florida, where he lives. But Morris hopped on a plane at 2:15 p.m. landing in Pittsburgh around 4:45 p.m. before making the nearly two-hour drive to Keystone High School to see his brother reach the milestone.

“I did not (know he was flying up),” Rainey said. “That was really cool. He wrote me a note. I thought that was all I got, but he was present, too.”

“He means a lot to this team,” Union head coach Eric Mortimer, who has been Rainey’s head coach for his freshman, junior, and senior seasons, said. “He has all that experience and everything. He’s a good leader. He can do anything. He plays well with everybody.”

Keystone head coach Greg Heath had nothing but praise for Rainey.

“I can’t say enough about Caden Rainey,” Heath said. “I was telling our guys, I love that kid. I always have. I love the way he plays. He’s a great competitor. He’s a great leader. He knows how to draw fouls. He draws charges. He’s just a really, really heady player.”

Kennedy Catholic’s DiNardo Reaches 1,000-Point Milestone in Win Over Farrell
Jan. 14, 2022 District 9 and District 10 Basketball Schedules Powered by Hunter’s Station Golf Club
We use cookies on our website to give you the most relevant experience by remembering your preferences and repeat visits. By clicking “Accept All”, you consent to the use of ALL the cookies. However, you may visit "Cookie Settings" to provide a controlled consent.
Cookie SettingsAccept All
Manage consent