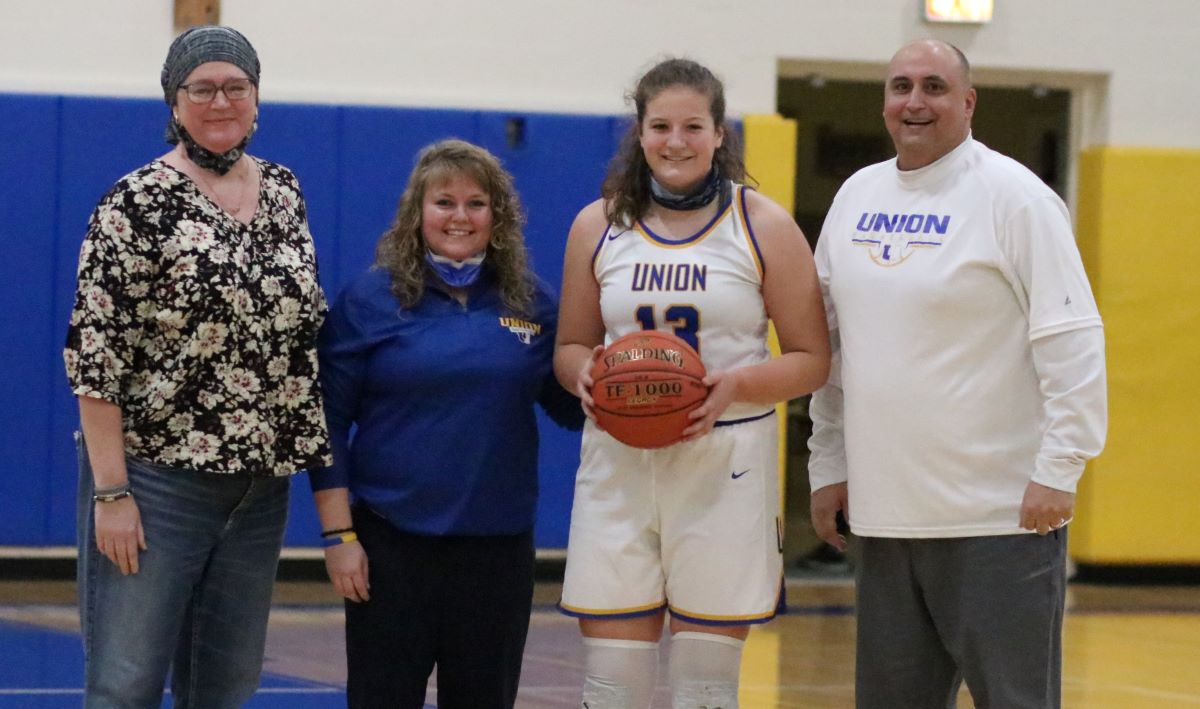 Watch Logue’s 1,000th point via Union’s YouTube Live feed at this link, which starts as she steps to the line.

“It means a lot,” Logue said. “It’s a nice accomplishment to have. It’s not really something I set as a goal. I have always wanted to just win some championships. But, it is nice to score a thousand points.”

Logue is just the fifth Golden Damsel player to reach 1,000 points before her senior season and the first in 15 years. Andrea Mortimer was the last when she reached the mark in a first-round PIAA playoff win over Duquesne March 5, 2005, as a junior.

“Not really, no,” Logue said when asked if she envisioned scoring her 1,000th point as a junior. “Like I said, I just want to win games, win some championships. I just try to play the best I can.”

Logue finished the night with 15 points, including 11 in the first quarter, and tied for game-high honors with teammate Kennedy Vogle, who scored 10 first-quarter tallies.

Between Logue and Vogle, Union scored 23 first-quarter points to lead by 10, 23-6, at the end of eight minutes.

Logue’s teammates rush to celebrate with her after she scored her 1,000th point. Photo by Shelly Atzeni. Check out more of Atzeni’s work here

“I think as the season went down the road a little further, we are back to playing our style that we are successful with, upping the tempo,” Logue said. “I think at the beginning of the season we were kind of just a little rusty not having the offseason.”

In addition to Logue and Vogle, Union also got 11 points from Keira Croyle.

Forest Area was led by 10 points from AMber Guzzi and nine from Jessica Wagner.

Union completes its regular season Thursday when it hosts Keystone.

Forest Area, which fell to 2-17, is back in action Wednesday at DuBois Central Catholic before traveling to Venango Catholic Friday to close out the year.

Warren’s Emma Ruhlman Reaches 1,000-Point Milestone in Win Over Oil City
District 9 and District 10 Basketball Schedule for March 2, 2021
We use cookies on our website to give you the most relevant experience by remembering your preferences and repeat visits. By clicking “Accept All”, you consent to the use of ALL the cookies. However, you may visit "Cookie Settings" to provide a controlled consent.
Cookie SettingsAccept All
Manage consent