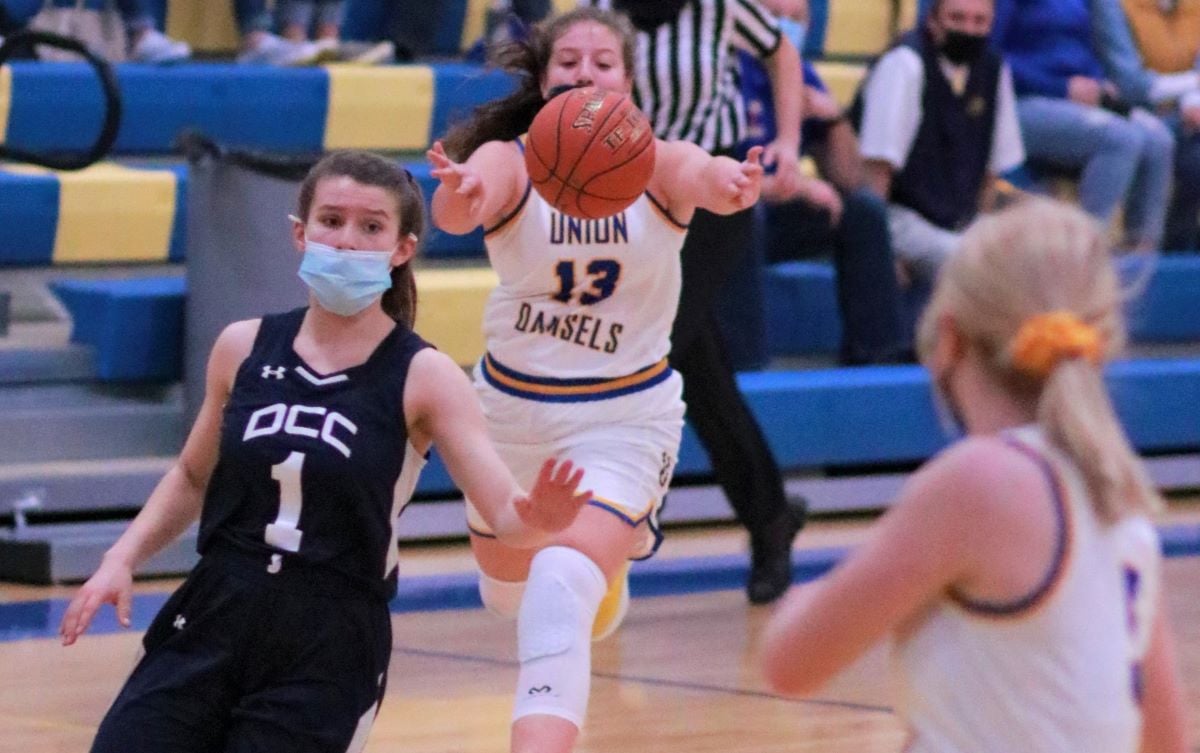 Dominika Logue of Union (No. 13 in white) throws a pass towards teammate Keira Croyle while DCC's Lauren Davidson (No. 1 in black) watches. Photo by Shelly Atzeni. Check out more of Atzeni's work here

RIMERSBURG, Pa. – Dominika Logue scored 24 points to lead Union to a 52-47 win over visiting DuBois Central Catholic in the opening round of the District 9 Class 1A girls’ bracket.

“It means so much and it meant so much to the girls,” Union head coach Ally Kepple, who won her first career postseason game as a head coach, said. “They were so excited for today. It does, it means so much.”

Logue played a vital role in the victory, especially during an 11-2 run to start the second half by the seventh-seeded Golden Damsels (12-10) that turned an eight-point halftime lead, 23-15, into a game-high 17-point, 34-17, advantage.

“It means a lot,” Logue said of the win. “This is what we have always wanted.”

Playing without two of its top six players – Rose Whipple and Paris Farley – because of COVID-19 protocols, the Lady Cardinals turned to freshman Kayley Risser.

Risser scored 13 of her game-high 26 points in the fourth quarter to keep DCC alive.

But the 10th-seeded Lady Cards had too many mistakes, including a pair of technical fouls and an intentional foul.

The technicals weren’t for complaining or anything but instead was for having six players on the court and then with five seconds left when DCC called a timeout when it didn’t have any left. The intentional foul came when the Lady Cardinals were trying to “give” a foul and the players pushed the Union player with two hands.

Union will play at 7 p.m. Thursday, March 11, at second-seeded Otto-Eldred in the District 9 Class 1A quarterfinals.

Dominika Logue was named the Allegheny Grille of Foxburg Player of the Game. Photo by Shelly Atzeni. Check out more of Atzeni’s work here

FRILLS CORNERS, Pa. – Holding ninth-seeded and visiting A-C Valley to six second-half points, eighth-seeded North Clarion advanced into the District 9 Class 1A quarterfinals with a 35-18 win in the first round.

The She-Wolves, who will get a rematch with Coudersport, the team that upset them in the District 9 title game, Thursday, March 11, at Coudersport in the quarterfinals, led 17-12 at halftime before outscoring the Lady Falcons, 18-6, in the second half.

A-C Valley got 10 points from Baylee Blauser, but the Lady Falcons’ three leading scorers Rachel Cullen, Andrea Meals, and Mia Sherman were held to two points, both from Sherman.

March 9, 2019 D9 2A, 3A Boys’ Playoff Recaps: Ridgway Rallies Past Redbank; Keystone Holds off C-L; Coudy, Kane Roll to Wins
Lasko’s Layup with 3 Seconds Left in Double OT Lifts St. Marys into D9 4A Title Game
This website or its third-party tools process personal data.In case of sale of your personal information, you may opt out by using the link Do not sell my personal information.
×
Manage consent