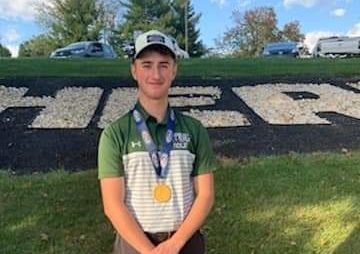 James fired a 1-over 72 at Heritage Hills in York, putting him two shots clear of three others – Palmerton’s Josh Suto, Avonworth’s Kai Carlson and Quaker Valley’s Jackson Bould for the Class 2A boys’ title.

James’ teammate, Tyler Parkhurst finished fifth with a 75, while Corry’s Maxx Rimdzius also is bringing home a medal, finishing tied for sixth with a 76.

James started on the tenth hole and shot a 38 on the back nine, which included seven pars, a bogey and a double bogey.

Clarion’s Kam Kerle was the highest District 9 finisher, shooting 79 to tie for 15th, while Kane’s Curt Barner shot an 80 to finish in a tie for 20th.

On the girls’ side, Swan’s sister, Lydia shot a 2-over 74, finishing in a tie for second, just one shot back of champion Paige Richter of Camp Hill.

Swan also started on the back nine, shooting a 34, which included seven pars and two birdies on holes 11 and 13, leading for much of the afternoon.

She shot a 40 on the front nine, which included five pars and four bogeys. Her teammate and sister, Anna Swan shot a 78 to finish fifth.

The Hickory girls impressed as well, as Sasha Petrochko shot a 76 to finish fourth and McKenzie Gustas an 80 to finish in a tie for sixth.

Petrochkho’s round included 14 pars, one birdie, one bogey and two double bogeys. Fellow Hornet Luciana Masters shot an 84 to tie for 13th and Ava Liburdi carded an 87.

The Class 3A championships will be held tomorrow, also at Heritage Hills.

Watch Live: Iroquois at Eisenhower Football Powered by the Allegheny Grille of Foxburg
Oct. 18, 2021 Soccer Scores
This website or its third-party tools process personal data.In case of sale of your personal information, you may opt out by using the link Do not sell my personal information.
×
Manage consent