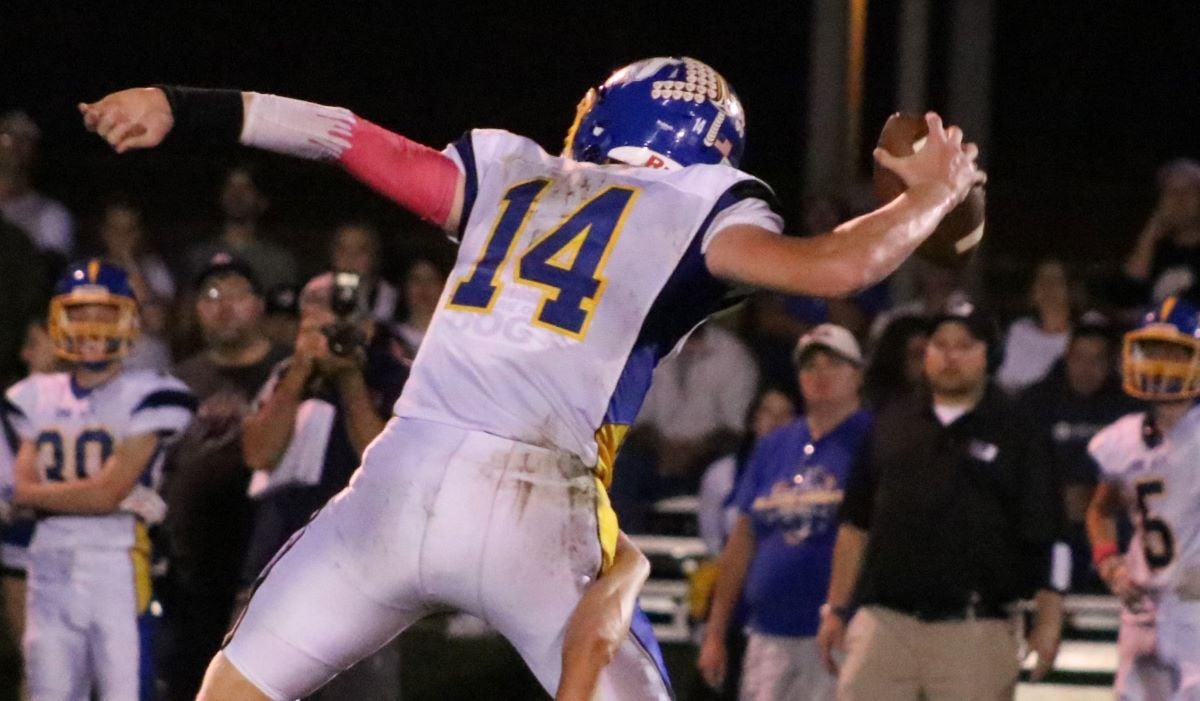 Bailey Crissman through a pair of touchdown passes for Union/A-C Valley Thursday. Photo by Shelly Atzeni. Check out more of Atzeni's work here

The game was tied at halftime before the Falcon Knights (6-1) got a 21-yard touchdown run from Dawson Camper and a 57-yard Bailey Crissman to Skyler Roxbury touchdown pass, which came on the final play of the third quarter, to take a 20-6 lead.

Defense was the name of the game for Union/A-C Valley, as it held Cameron County to 134 yards, including just 32 yards and two first downs in the second half.

The lone score for the Red Raiders (4-3) came on a 66-yard Dylan Reider punt return for a touchdown, the second consecutive week the Falcon Knights have given up a special teams score. That return gave Cameron County a 6-0 lead in the second quarter.

Union/A-C Valley tied the game before halftime on a 23-yard Crissman to Ryan Cooper touchdown pass on the ensuing drive after Cameron’s lone score with just 16.7 seconds left in the half.

The Falcon Knights scored two touchdowns in their first three possessions of the second half with the Camper run and Crissman long pass to Roxbury sandwiched around a drive to the Cameron County goal line where on 2nd-and-goal from the 3, Crissman fumbled as he was trying to bull his way in for a score. The Red Raiders recovered in the end zone for a touchback.

Mikey Card led the Falcon Knights on the ground with 102 yards on 12 carries. Camper added 32 on four carries with the touchdown.

Lathan Reed ran 21 times for 83 yards for Cameron County and caught one pass for 14 yards.

Cameron County’s best two chances to score came in the first half when the Red Raiders took the opening possession to the Falcon Knights’ 8 before stalling on downs. It had a first-and-10 at the Union 11 later in the second quarter, but two losses for a combined 15 yards led to a third-and-25 pass by Maddux Baughman that was intercepted near the goal line by Roxbury.

The Falcon Knights punted away that possession to Reider, who returned the boot for the lone Red Raiders points with 1:55 left in the second quarter.

D9 football: Panthers at Hubs, Bison work on shutout streak
D9and10Sports to Broadcast Keystone at Smethport; Iroquois at Ike Football Powered by Prime Fitness USA and Specialty Fabrication and Powder Coating, LLC.
This website or its third-party tools process personal data.In case of sale of your personal information, you may opt out by using the link Do not sell my personal information.
×
Manage consent