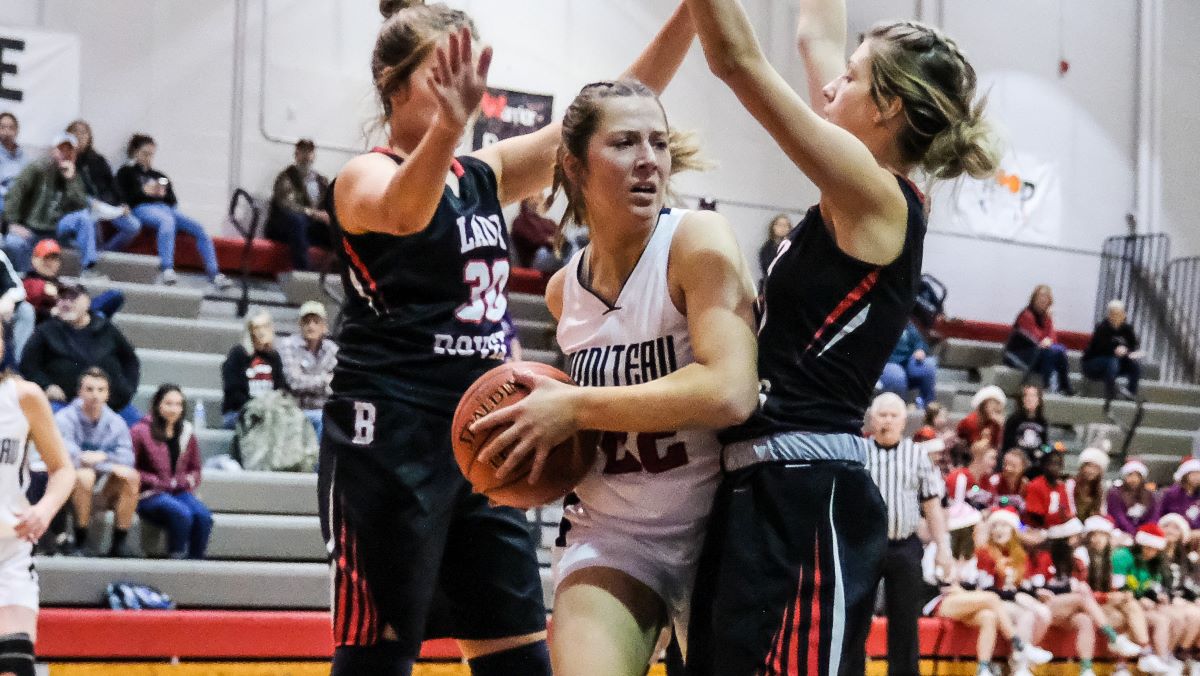 Davina Pry had 15 points and 9 rebounds for Moniteau in its win over state-ranked North Clarion Friday. Photo by Mike Schnelle

The Lady Warriors’ win snapped a 23-game regular-season win streak for the She-Wolves (14-1), who entered the game ranked No. 5 in Class 1A in the state by Trib HSSN. North Clarion’s last regular-season defeat came exactly one year ago, on Jan. 20, 2022, 32-28 to visiting Redbank Valley.

The loss also snapped a 19-game regular-season win streak away from home for North Clarion, which last lost outside of Frills Corners in the regular season on Feb. 18, 2021, 49-37, at Moniteau.

Moniteau (11-3), which has won five in a row and 7 of 8, took the drama out of Friday night quickly jumping out to a 25-11 halftime lead thanks to eight first-half points from Davina Pry.

DUKE CENTER, Pa. – Katie Sheeler exploded for a career-high 34 points to go along with five steals, as Otto-Eldred won its 26th straight NTL game with a 67-43 home victory over Northern Potter.

Sheeler scored 17 points in the first quarter alone to help the Lady Terrors, who haven’t lost in conference play since Feb. 11, 2020, to Coudersport (there was no NTL division in 2021 because of the COVID-19 bubble) take a 22-1 lead at the end of eight minutes.

O-E still led by 20, 35-15, at halftime with Sheeler scoring seven more points in the second quarter before she netted eight points in the third quarter to expand the lead to 52-28.

Sheeler finished off her big night with a pair of fourth-quarter free throws.

It marked the third time in her career and the first time this year Sheeler has hit 30 points in a game. Her previous career-best was a 31-point effort against Johnsonburg on Jan. 27, 2021, and she scored 30 points in a win over Smethport on Feb. 11, 2022.

Rebecca Martin had a double-double for Northern Potter with 11 points and 14 rebounds while also adding six steals. Reagan Slawson also had six steals for the Lady Panthers to go with eight points and three assists, and Kayden Brown added 10 points and five steals.

KANE, Pa. – Mia Anderson had a career-high 22 points while completing a double-double with 12 rebounds to lead Kane to a 52-25 win over visiting Brockway.

Caskey, who also grabbed eight rebounds, scored eight points in the first quarter that saw St. Marys jump out to a 15-3 lead. St. Marys led 33-13 by halftime and kicked the PIAA Mercy Rule running clock into motion late in the third quarter with a 44-13 lead.

Caskey’s previous career-high also came against Brookville when she netted 19 points on Feb. 16, 2022. Her previous season-best this year was 16 points vs. Ridgway on Dec. 9.

GALETON, Pa. – Navaeh Spaeth had a game-high 14 points to help lift visiting Cameron County to a 48-28 win over Galeton in NTL action.

STRATTANVILLE, Pa. – Building a 21-4 lead at the end of the first quarter, Clarion-Limestone had little trouble getting a 58-26 home win over Forest Area.

Alex Leadbetter scored 11 of her team-high-tying 13 points in the opening eight minutes to lead the early charge for the Lady Lions.

Natalie Bowser scored six of her game-high 16 points in the second quarter with Mia Traister adding all four of her tallies in the frame.

Emma Gruber contributed 12 points to the winning cause with Jillian Winters scoring eight.

Harmon also scored six first-quarter points with Alivia Huffman also scoring six points in the opening eight minutes to help the Lady Bulldogs to a 16-4 lead at the end of the first quarter.

That lead grew to 30-6 at halftime with Ady Bon scoring all five of her points in the second quarter.

Clarion, playing without second-leading scorer Taylor Alston, got eight points, all after halftime, from Sophie Babington.

DUBOIS, Pa. – DuBois outscored visiting Bradford 36-2 over the final three quarters including 32-2 in the second half to grab a 51-14 D9 League victory.

The Lady Beavers only led 15-12 at the end of the first quarter and 19-12 at halftime before scoring 16 points apiece in each of the next two quarters while holding the Lady Owls to a lone third-quarter field goal.

Emma Dailey scored six of her eight points in the first quarter with Chloe Fritch adding five of her seven in the quarter.