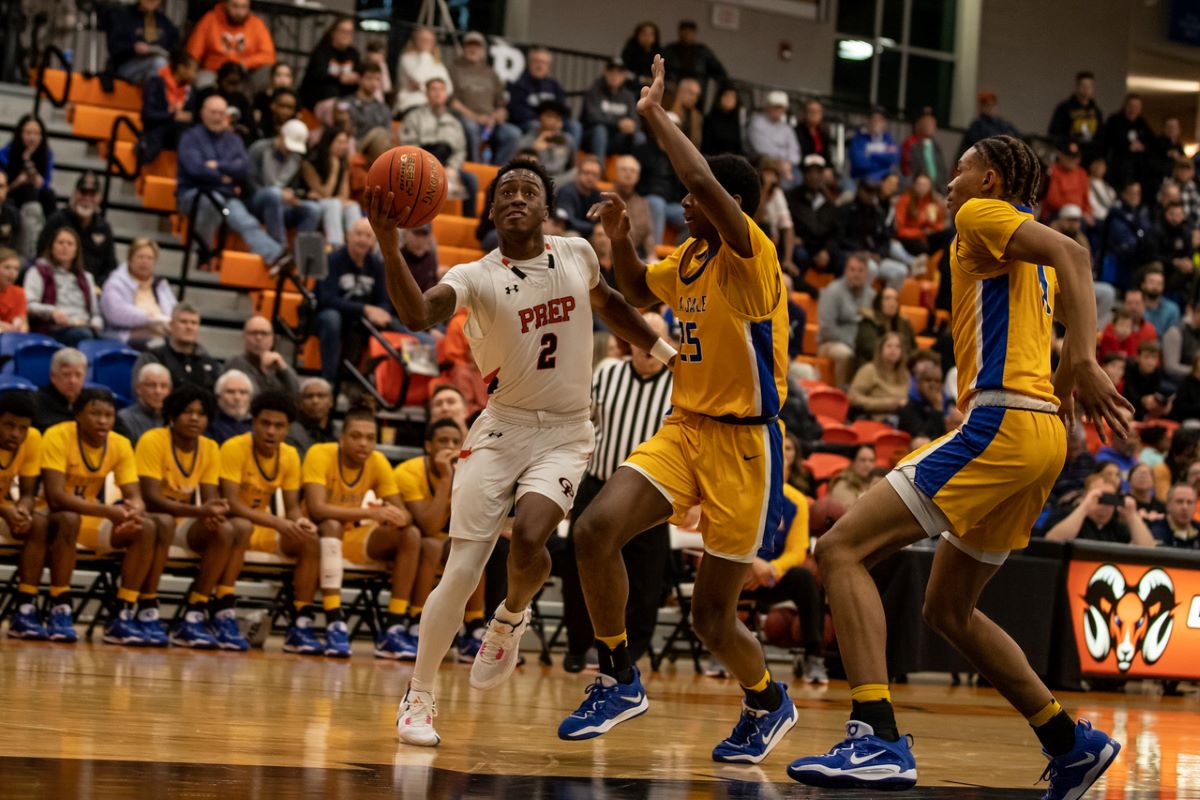 Neither team was able to gain much of an advantage in the back-and-forth affair. Seneca led by three late in the first overtime, but Owen Kemp knocked in a 3 at the buzzer to send the game to the second extra session.

Seneca had slim leads in the fourth quarter and both the first and second overtimes.

Logan Kibbe had a monster effort in defeat for Seneca, scoring 34 points, including eight 3’s.

Prep led 23-21 at halftime and used a 14-7 run in the third quarter to help gain some breathing room.

Jake Sambuchino and Tavion Spencer had 10 points each for the Ramblers.

Owen Becker added 14 points for the Dragons, while Braylon Barnes had eight and Chase Sitler seven.

Manny Perez led three players in double figures for Titusville with 18 points, while Isaiah Colon had 17 and Kasen Neely 12.

CORRY, Pa. – Jalen Wood led three Franklin players in double figures with 21 points as the Knights picked up a 78-50 win over Corry.

Wood scored 11 of his 21 points in the third quarter for Franklin, which has now won six in a row.

Damon Curry netted 13 points for the Knights, while Cole Buckley added 11 and Dreyden Payne had nine.

SLIPPERY ROCK, Pa. – Hickory outscored Slippery Rock 21-12 in the fourth quarter on its way to a 61-52 victory.

Hickory scored 17 of its points from the charity stripe in the fourth quarter, going 17-of-19 from the line over the final eight minutes and 22-of-24 for the game.

Rylan Dye had 14 points for the Hornets, including 12-of-13 from the free throw line, while Tyson Djakovich also had 14 points.

Devin Daniels was also in double figures for the Hornets with 12 points, eight of which came in the first quarter.

Slippery Rock, conversely, was 7-of-12 from the line in the game.

Dylan Gordon led the Rockets with 13 points, while Levi Prementine had 10 points, and John Sabo and Josh Book had nine apiece.

Eisenhower led 28-24 at halftime and outscored the Eagles 30-24 in the second half.

Wyatt Lookenhouse and Kael Hunt added 12 points each for the Knights, while Kris Bunk had 10.

The Oilers went on a 20-4 run in the second quarter, with Hornbeck scoring 10 of his points during the spurt.

Cam VanWormer netted 14 points for the Oilers, while Sayyid Donald had 12 and Connor Highfield 10.

Alex Brady had 16 points for Conneaut.

Logan Lentz had 18 points for Greenville, while Noah Philson added 11.

Bryce Drayer led a balanced effort with 15 points for Union City, while Josh James had 12 and Wyatt Post 11.

Cole Doolittle had 12 points for Maplewood, while Ethan Peterson added 10.

EDINBORO, Pa. – Nick Krahe had 30 points and pulled down seven rebounds as Harbor Creek earned a 77-68 win over General McLane.

Harbor Creek went on a 23-12 run in the second quarter on its way to the win.

Jeremy Frazao added 15 points and seven rebounds for the Tigers, who have now won six in a row.

Walker Carroll had a game-high 23 points for Cochranton, including six 3’s, while Landon Homa added 10 points.

Daemyin Mattocks also had 14 points for Mercer and Christian Grossman had 12.

FARRELL, Pa. – Lamont Samuels led a balanced Farrell effort with 13 points as the Steelers earned a 76-36 win over Rocky Grove.

Farrell led just 12-8 after the first quarter but outscored the Orioles 44-12 over the second and third frames.

Khanye Matthews added 12 points for Farrell, while Nasir O’Kane had 11 and Malachi Owens 10.

Landon Wayne had 17 points for Northwestern.

Khalon Simmons had 15 points for Meadville.

Santinio Piccirilli was also in double figures for Sharon with 10 points.

Anthony Reeds had 18 points for Wilmington.

Getting Defensive: McDowell Puts the Clamps on Fairview to Pick up Region 6 Victory
Jan. 24, 2023 Luton’s Plumbing, Heating, AC Wrestling: Brookville Knocks Off St. Marys; Clearfield Tops Huntingdon
This website or its third-party tools process personal data.In case of sale of your personal information, you may opt out by using the link Do not sell my personal information.
×
Manage consent